A car for careerists, the Model S Plaid deserves a short-lived career. 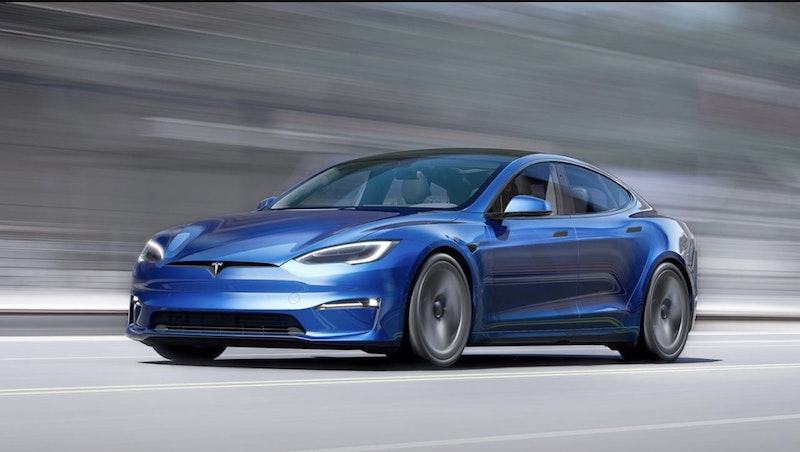 The fable of the boy and the owl is an allegory of our time, about the nature of mystery and the timelessness of human nature, in which the boy asks the owl, “How many licks does it take to get to the Tootsie Roll center of a Tootsie Pop?” while the owl asks the boy, “Why do men who drive Teslas act like boys who can’t drive, charging about with more energy than the sugar high from a Tootsie Pop?” The world may never know the answer to the first question, just as no one knows certain things except the Spirit of God. But, like President Biden wearing sunglasses, blind to reality and besotted with trains instead of cars, ignorance is no reason not to welcome an Amtrak of a spoonful of ice cream while screaming that Tesla sucks.

What sucks is the 2022 Tesla Model S Plaid, the company’s most powerful and expensive production car. The car sucks because of what it represents: Elon Musk’s escape from a 1980s-era mall, where, after raiding The Sharper Image, KB Toys, RadioShack, and Sears, he builds a car from a quintet of massage chairs, a cache of video games, a pair of radio antennas, a dishwasher, and four Allstate tires. The car sucks because of what it portends: Musk’s past-obsessed near future of Knight Rider on Earth and Total Recall on Mars.

That Tesla also has stores in high-end malls is no accident, just as the interior of the Model S Plaid is no study in high design. The two bespeak greenness, not the bespoke qualities of a luxury sedan. A car for a certain class of people, rather than a car for people with class, the Model S Plaid is the car of America’s new ruling class.

True to its name, the Model S Plaid has the personality of plaid. In spite of the truth about the origins of its name, that the name is a reference to the film parody Spaceballs, the Model S Plaid is an unintentional parody of the death of taste, as if Tesla owners had lost their sense of taste due to a mass outbreak of COVID-19, as if the people who had partied with Barack Obama left the scene not with a collective toot but a flatulent farewell, as if they found their key cards and vaccination cards were no good.

What no one can find is the Model S Plaid’s soul, because it doesn’t have one. What it has instead is vegan leather, a yoke steering wheel, a 17-inch touchscreen, and wood trim that looks like wood grain laminate from a kitchen showroom. The car is KARR (Knight Automated Roving Robot), the antagonist of KITT (Knight Industries Two Thousand), in dual episodes of dueling cars.

Antiseptic like KARR and artificial like KITT, the cabin of the Model S Plaid is minimalist but not elegant. Because screens control everything, because there’s nothing to touch except a touchscreen, the screen is a two-dimensional device in need of a three-dimensional display. What the Model S Plaid needs, Tesla doesn’t offer: “haptic holograms” of knobs, buttons, vents, dials, and switches.

The illusion of touching an object, of gesticulating like Tom Cruise as a manic conductor in Minority Report, has more appeal than the reality of an “influencer” tapping like mad on an iPhone.

The Model S Plaid is a car for a not-yet-invented business, a car for the Ricky Roma set, which goes to the top “closer” of properties on Mars; or a car for the CEO of a chain of funeral homes specializing in cryonics.

A car for careerists, the Model S Plaid deserves a short-lived career.