The Innocence of the Rainbow Loom

An odd, but benign trend. 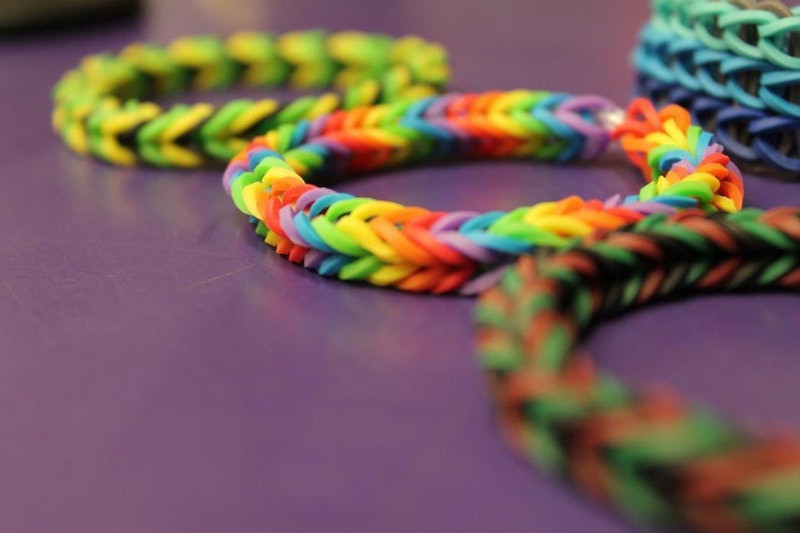 I’ve had to scramble at the holidays to find many gifts. Once, the hot-off-the-press Buzz Lightyear doll that Disney didn’t make enough of and was the one thing my daughter asked Santa for. Once, some stupid annoying electronic hamster thing. And I wasn’t proud to be on the Amazon pre-release list for the One Direction movie that just came out.

But there’s a toy this year that every kid is talking about. The Rainbow Loom is a plastic craft kit that reminds me of latch-hooking sets I got as a kid, back in the 70s/80s, or even the braided ribbon barrettes with beads we used to make. The loom creates, simply, bracelets out of small rubber bands. There is a basic pattern kids make when they first learn, and, as they get more experienced, advance to styles like the “double fishtail.” My daughter regularly watches YouTube videos to discover how to create the latest and most complicated weaves for the bracelets she makes.

In fact, around Halloween when she was talking about wanting a Rainbow Loom, I told her to just ask Santa for it. “But mom,” she said, exasperated, ”Christmas is like forever from now and the trend might not even still be around by then.” Probably a fair prediction, but I wasn’t about to spend $20 on a toy when it wasn’t her birthday or Christmas, so she bought it with her own money and immediately set about making Baltimore Ravens-colored bracelets, school color bracelets, glow in the dark bracelets, and beyond.

Her brother looked on with interest, as boys at his school were sporting the bracelets that apparently have no gender borders. He procured Ravens and Orioles-colored bracelets from his sister (at $1 apiece) to show off at school. I began to worry the bracelets were going to be banned, like SillyBandz bracelets a few years earlier, but the only message I heard from the schools was that the kids weren’t allowed to sell them in school. There wasn’t a whole lot of moneymaking going on with the bracelets (outside my house) anyway; most kids were simply trading them, like a precious elementary school currency.

One day, a middle school boy who is my son’s hero came to the bus stop (our front porch) with his own Rainbow Loom and sat on the step working on his design. My son was incredulous; it was one thing for boys to wear the homemade bracelets made by their sisters, another thing entirely to create them on your own. He proposed a deal: if I bought the Rainbow Loom kit, he’d make me three different bracelets in Philadelphia Eagles, Phillies and Flyers colors. Smart boy knows when to appeal to his mother’s sports team color preferences. No deal, though. If his sister didn’t get one for no reason, he wouldn’t, either—he’d have to wait till Christmas.

Besides, it’s not just $20 for the Loom. The little rubber bands in all the different colors that you have to buy to make the bracelets—especially the complicated designs—those add up. At $2-$3 a bag, and at the rate the kids burn through them, parents across the nation are now shaking their heads at the brilliance of this thing’s creators and the amount of money we’re spending on colored rubber bands. It’s the talk of the school pick-up line where you can score cheap bulk bands.

But there are worse things. This is a time when parents’ biggest concern can often be how much “screen time” their kids are getting between mobile devices, TV and video games. I’ve always been a “go play outside” mom, and if outside happens to be sitting on the porch making bracelets to trade with your friends? Fine. And I’m pretty sure I’ll be sporting some Philadelphia team colored bracelets in a few days.