All I want for Christmas is plumbing. 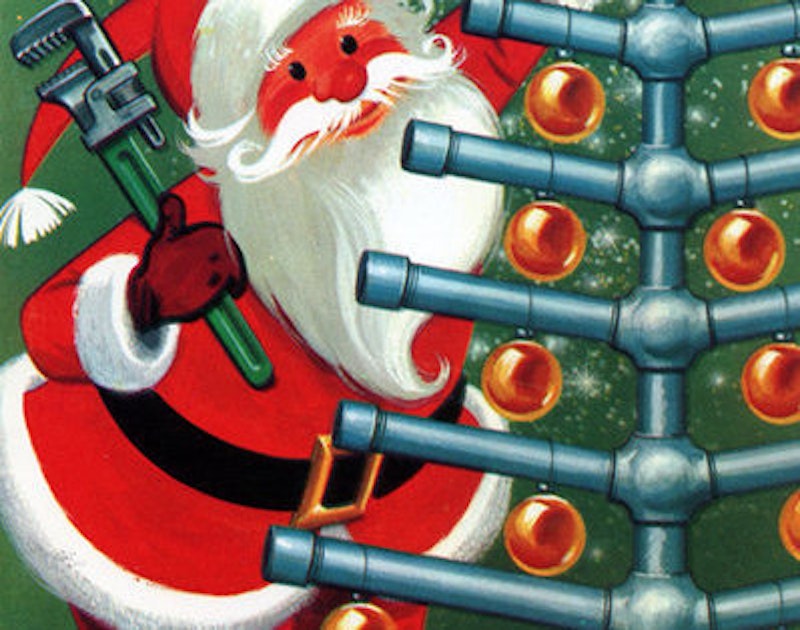 I know you’re busy with Christmas, so I won’t take up much of your time. Besides, I doubt you’ll be moving me over to the “Nice” list anytime soon (though if for some reason I landed there by mistake, I’ll take an orange L.L. Bean kayak and a MacBook Air). But I don’t think my one legitimate request this year is that ridiculous, and besides, I’m sure you agree that if all the girls in the world were on the nice list, it would be a boring place.

All I want for Christmas is plumbing. And I don’t mean naughty-girl-list metaphor plumbing (sicko!), though I’m here to negotiate. I mean actual pipes and water and showers and water pressure and a bath. I’ve decided that after 15 years, my 1881 Victorian clawfoot tub with ghetto-rigged surround shower curtains that stick to you while you are shaving your legs is total bullshit. Sorry for cussing, but I’m already on the appropriate list. The clawfoot tub part used to be charming until the 19th century faucets broke and now I can’t even take a bath in there to make up for the showers.

My favorite Christmas song is “Santa Baby.” The Eartha Kitt version, not Madonna, because no one should ever remake that song (hear that, Kelly Clarkson?). You probably like the song, too, since its underlying message is that we as women will trade sex for stuff like sables and ‘54 light blue convertibles and yachts and rings that aren’t on the phone. The deed to a platinum mine? Lordy. She is going to be a busy girl managing a mining operation and dealing with the unions. No thanks.

So apparently it was decided long ago that the birth of Christ should be celebrated by trading sexual favors for gifts, and I’m here to honor that tradition. Who are we to question Eartha Kitt? But if I’m going to get my stocking stuffed, it’s going to be for a hot, hot bath and/or decent shower anytime I want one.

So here’s my song to you:

Santa baby, slip a drain kit under the tree, for me

I've been a mostly good girl

Santa baby, and hurry down the chimney tonight

Santa baby, and hurry down the chimney tonight

Santa cutie, and hurry down the chimney tonight

I really do believe in you

Let's see if you believe in me

Santa baby, come on down my chimney tonight