The Rainbow Loom and the Lost Art of Making Stuff

At least it's not another screen to stare at. 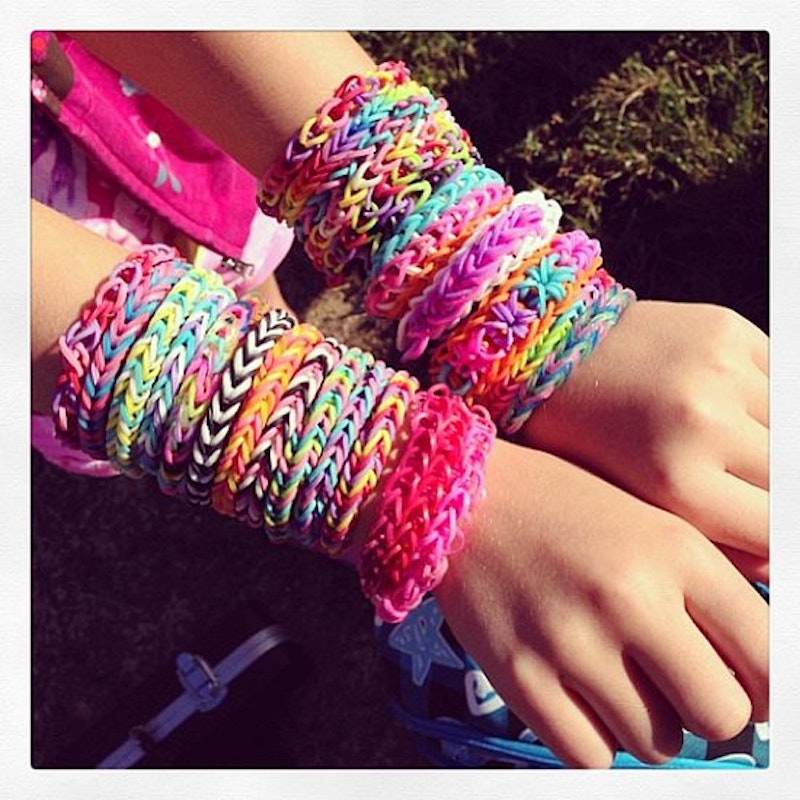 Nodin was supposed to teach me how to use the Rainbow Loom. Every time I saw him, I'd ask: "Is this the day you're going to show me how to make bracelets with this thing?" And then he'd assent, evasively, and eventually begin to hook the miniature rubber bands around the protrusions on the loom, gingerly tugging and adjusting them with the loom stylus, until the inevitable occurred: a mistake. "Arrrgh!" he'd thunder, frustrated. This would happen a few more times, and he'd stalk away.

Thus, his first several Rainbow Loom bracelets were woven by his mother, and my unspoken assumption was that this craft meme was one he likely lacked the patience to master. But I'd forgotten something very important about my son: his raw frustration usually gives way to determination and, eventually, near mastery. So it was that several weeks later, he did teach me how to turn tiny colorful rubber band bracelets, albeit via a loom-free technique that demands careful looping, and we sat around my apartment sifting through a bag of bands for the right colors and made a ton of the things.

We didn't sell them, though, or give them away to anyone. Rather, they became the basis for a game wherein we snapped them from one end of the flat to the other in a sort of competition. What I haven't told him is that from my perspective, making the bracelets with him is way more fun than watching them fly through the air at seemingly impossible speeds. It's a joy to see him exercise patience and care—qualities not typically attributable to seven-year-olds—and to watch raw materials transformed into something of arguable value.

Mary McCarthy's Splice Today piece on the Rainbow Loom trend rightly calls it out as both childhood clutter and money-suck, but there's something to be said for it as a hobby. But people who know me are used to my diatribes about how one of the biggest modern problems the United States has is that we don't make physical stuff anymore, in part for a bunch of socio-economic reasons, and that on several levels we'd be healthier if we got back to those roots. If crafts aren't a magic wand for this condition, they at least have the likely effect of fostering appreciation for making stuff—a disciplined appreciation that should be learned early in life. Some of my favorite memories of elementary school at the Waldorf School of Baltimore involve sewing, knitting, and crocheting—activities that much of American culture dismisses as “feminine," but, you know, whatever. I would subsequently continue along that path on my own at home, becoming fascinated with embroidery string constructions I never was any good at.

Later, inspired by friends and bursting with ideas, I poured my budding creativity into zines that I photocopied, collated, and mailed to anybody who wouldn't send them back. In this way, I arrived at a pride in origination that video games, sports, snowball fights, and the smashing together of action figures just can't achieve.