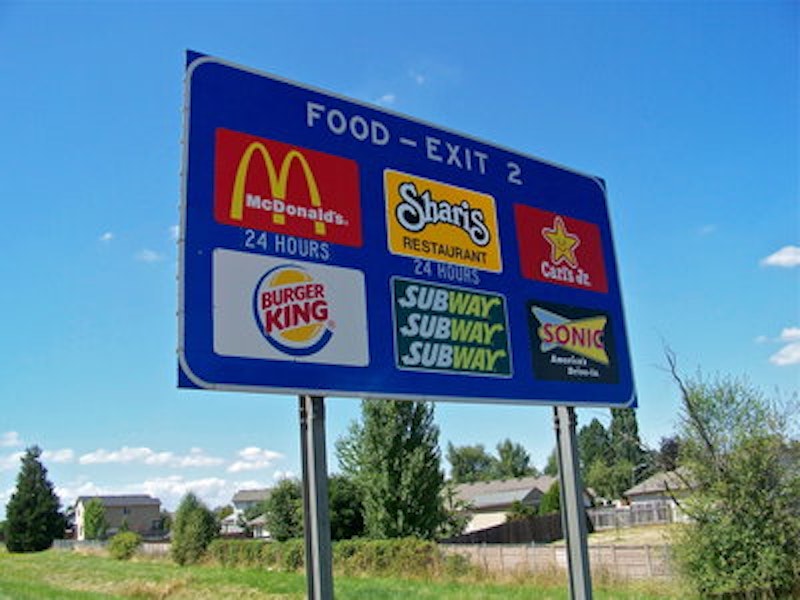 We’d been on the Iowa turnpike for hours, just a couple of states left to go on our unplanned road trip from California to New Jersey, and we were hungry. Stacey and I had spent the past three days crossing the country on a budget, camping and buying most of our food at grocery stores, then cooking it on either my little charcoal grill or her propane burner. In Iowa, we found, this behavior was less acceptable along the turnpike than it had been in Arizona, Oklahoma and Indiana. Mostly, I think, the people walking by our makeshift campsite were staring because we’d set up outside a Burger King.

It wasn’t our fault, though. On that stretch of highway—which we would’ve had to pay to leave—we’d come across no other rest stops, campgrounds, or turnouts not reserved for police. So, when we got hungry, the empty outdoor seating area of the Burger King attached to a mini-mart and gas station was the best option. Generally, Stacey and I don’t eat fast food, though we aren’t health nuts, exactly. Mostly, I think, we’re stubborn. Stacey doesn’t eat much meat, we both try to avoid things that come with too much plastic, and we have a strong reaction against having our decisions made for us. And that’s what the turnpike is, really. After having crossed some of the most beautiful and open parts of this country, we’d been forced onto a toll highway with nothing but what they call travel plazas, and I call corporate-owned and -operated strip malls with their own captive audience.

After failing to find anything fresh to eat at the mini-mart between the gas pumps and the lot where semis go to idle, we took a moment to stand in the parking lot and smell the mixed aromas of flame-broiled meat and car exhaust, before deciding this was the best we were going to get on the turnpike. So we went back to the car and broke out the burner and frying pan, and cooked ourselves a couple quick sausage and veggie omelets on the bright red picnic table furthest from the door.

I kept expecting the people passing in and out the restaurant to comment, but none offered us anything more than a puzzled look. Even the travel plaza employee who came to empty the trash said nothing, but simply went about his business as if we weren’t cooking a few feet away from him. We did, however, wait until he’d left before rinsing the pan in the automatic sprinklers irrigating the 10-by-20 patch of grass that was the closest thing to a park we’d find on the turnpike.

I’ve done a lot of traveling, and one thing I’ve learned is that it’s best to avoid businesses that cater exclusively to non-locals. In places like the turnpike travel plaza, it’s clear that those in charge of planning were perfectly aware of the captive nature of their customers, and it’s also clear that they weren’t particularly interested in developing lasting relationships with those customers. If they were, they’d have built more options into the services and products they offer. But since everyone involved understands there aren’t any other options, they don’t, and most of us don’t complain.

It’s this, I think, that makes me smile, now, as I remember that barbecue. Not because we were sticking it to some distant and faceless man, and not even because we were proving how edgy or different we were from all the sheep with their Whoppers. I’m perfectly aware of how often I exhibit sheep-like behavior, and can guess how little any given corporate bigwig cares about the money Stacey and I didn’t spend at the travel plaza. But I smile because when I remember the looks we got that day I’m reminded of the little daily battles we fight against homogeneity.