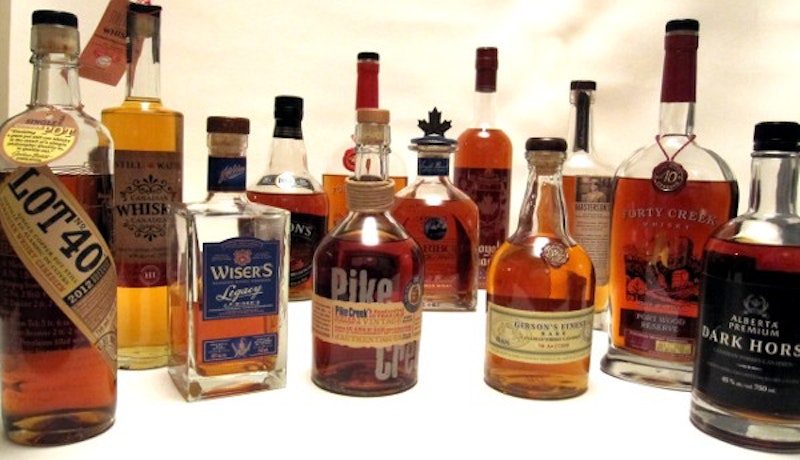 Canada. The vast country to our north that sent us Rush, John Candy, Poutine, and Ted Cruz also sends a lot of whiskey. Tens of thousands of gallons of it come across the border annually—three out of every four barrels of hooch they make heads south.

And most of it isn’t very good. Okay, that’s harsh. Perhaps not very interesting is more accurate. The Canucks have long been kings at making mild-mannered blends that are sometimes disparaged as “brown vodka.” Canadian Club, Seagram’s VO, Black Velvet, Canadian Mist—these are some of the hoary brands that have been putting the “meh” in tumblers and highballs for years. (Frequently mistaken for a Canadian, and often sold alongside the above brands, Seagram’s 7 Crown is an American blended whiskey that largely is brown vodka: a mix of 20-percent straight whiskey and 80-percent grain neutral spirits.)

Why so many wimpy, blended whiskeys from Canada? I rang up jovial drinks writer Lew Bryson, author of Tasting Whiskey and former managing editor at Whiskey Advocate, and his short answer is this: It’s what they do. And always have done. “There are very few unblended Canadian whiskies even among the craft distillers,” he says. “It’s their mindset and it’s what makes Canadian, Canadian. But they are not being stupid. The stuff sells.”

Naturally, distillers there work under an entirely different set of traditions and government regulations than those in Kentucky and Tennessee. Take the curious case of Canadian rye. Canadian distillers were among the first to popularize using this spicier grain to make whiskey some 200 years ago and “rye” eventually became a nickname for all Canadian whiskey. (When Mad Men’s Don Draper asks for a rye, which he often does between cigarettes, he’s really calling out for a Canadian whiskey.) For a bottle to be labeled rye on this side of the border, rye must represent at least 51-percent of the grain used to make it. Canada has no such mandates. Technically, a bottle of Canadian rye whiskey can contain no rye at all. Things are just looser there (though Canadian whiskey must be aged a minimum of three years to be labeled as such.)

Bryson says the taxman might also have had a hand in shaping Canadian offerings over the years, as collections are tallied more from quality than quantity. “The tax structure is not really friendly to higher priced whiskey in Canada so we tend to have a lot of volume brands,” Bryson says.

And like he said, the stuff sells. According to figures from the Distilled Spirits Council of the United States, as recently as 2010, Americans drank more Canadian whiskey than bourbon and Tennessee whiskey (which is to say, Jack and Dickel) combined. But since then? Well, there’s been a brown liquor revolution. Vodka’s appeal is slumping (thank Millennials) while Bourbon and Tennessee whiskey sales have spiked 25 percent. Consumption of Canadian whiskey, meanwhile, has grown anemically—less than four percent.

Considering the global whiskey resurgence (that’s seen Irish whiskey sales double on these shores), Canada can no longer rest on the cash-cow laurels of its blah blends. New Canadian brands and bottles are now slowly popping up on liquor store shelves. In some sense, it took Americans to help kick Canadian distillers into gear. Years away from selling their own aged goods, some craft distillers, such as Vermont’s WhistlePig, bought some of Canada’s older and better barrels and repackaged the juice for sale under their own label—at premium prices.

And then just last fall English whiskey critic Jim Murray anointed Crown Royal Northern Harvest Rye the 2016 Whiskey of the Year in his influential, annual Whiskey Bible. That the first Canadian to ever take the top spot is a new, mid-shelf, 25-buck-a-bottle rye (scoring 97.5 out of 100) left many whiskeyphiles astounded. Adding alcohol to the firestorm of controversy, not a single Scotch made Murray’s top five. (The new, Kentucky-made, six-year-old, Pikesville rye took the number two spot.) There’s been much cheering north of the border while elsewhere there are accusations that ol’ Jim has sold out.

(“For the price, Northern Harvest is a steal—it’s a really good whiskey,” Bryson says, “But best whiskey in the world? No frickin’ way.”)

So, people are chatting about Canadian whiskey like never before. But, to borrow a bit from those old Carlo Rossi jug-wine TV ads, I like talking about whiskey, but I’d rather drink it. I arranged a quick Canadian whiskey tasting at Baltimore’s Blue Pit BBQ and Whiskey Bar, which is conveniently located a short walk from my house. (A little too conveniently my wife might say.) I invited my brother Brian along and together with Dave Newman, the Pit’s chef and co-owner, we did a blind taste test of five newer Canadians at various price points, jotting down notes and ranking them from one to five.

Coming in with a near perfect score was Masterson’s 10-year Old Straight Rye (actually, one of those American brands made from Canadian sourced whiskey). Dave and Brian both gave it five while I pulled back just a touch for a 4.5. It has the unmistakably lush mouth feel of a well-aged whiskey. Our notes included “bold rye taste” and “long finish.” I scribbled down “tastes expensive.” And it is, at about $80 a bottle.

The runner up, with a pair of fours and a three was Alberta Rye Whisky Dark Batch. Rolled out last year for just under $30 a bottle, this really is a strange animal and further highlights the different rules northern distillers operate under. See, it’s legal for them to label something as Canadian whiskey even if as much as nine percent of what’s in the bottle is other alcohol from other countries. In Dark Batch’s case, eight percent of it is Old Granddad bourbon and one percent sherry. “Frankenwhiskey” though it might be, we liked its rich smoothness and balance, with Dave easily calling out the bourbon notes.

Forty Creek Barrel Select finished mid-pack with threes across the board. Two of us used “cookies” to describe its sweetness. This isn’t labeled rye and there’s really no telling what’s in it. You could buy worse bottles for around $23. And better.

Wiser’s Rye, at around $18 a bottle, was our cheapest option tasted. No way of knowing how much rye was used in this blended whiskey, but a lack of depth was noted and we scored it three, 2.5, and two. I equated it to melted vanilla ice cream. (This is Wiser’s entry-level whiskey; Bryson has great things to say about Wiser’s 18-year-old offering.)