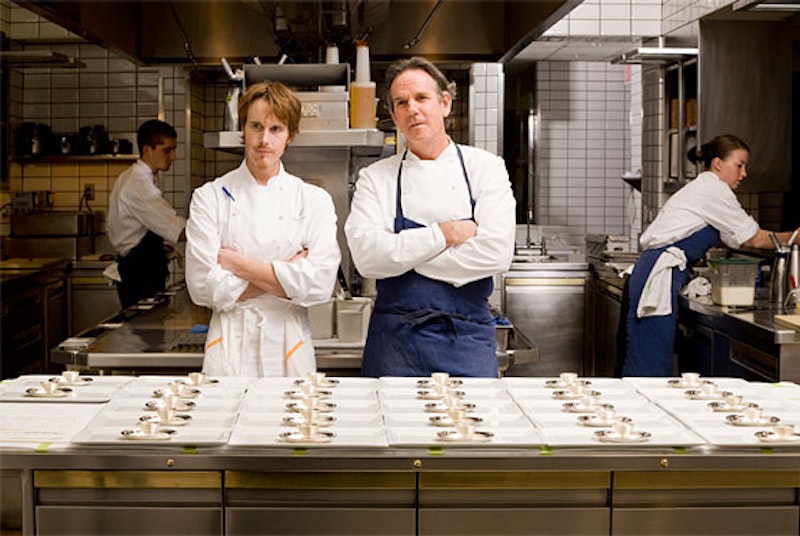 Pete Wells’ party of four spent nearly $3,000 at iconic chef Thomas Keller's Per Se recently, and one of his guests got so upset that she threw her napkin on the floor in disgust. The problem for Per Se was that Wells is not an average well-heeled customer that the Manhattan restaurant caters to with nine-course meals lasting up to four hours. He's the restaurant critic for The New York Times, and he can take cherished “stars” from an establishment.

Wells took away half of them, knocking Per Se down from four stars (its highest designation) to two. Instead of being in the exclusive company of the five other four-star restaurants in New York City—Del Posto, Eleven Madison Park, Jean-Georges, Le Bernardin and Sushi Nakazawa—Keller’s Columbus Circle eatery now finds itself rated alongside the East Village’s Bruno, an upscale pizza place. No, Bruno’s Italian offerings are nowhere near the culinary level of Per Se, but Wells grades “on a curve,” factoring in the exorbitant price Per Se charges for a meal—$325, wine not included.

There must be a lot of frayed nerves among New York’s posh restaurateurs, just a couple weeks into the new year, because Wells has emerged from 2015 feeling very cranky. In his first review of 2016, he savaged—with a “zero star” review—Kappo Masa, a joint project of sushi chef Masayoshi Takayama (of Manhattan’s most expensive restaurant, Masa, where dinner is a minimum of $450 if you're drinking tap water) and art dealer Larry Gagosian.

Now Wells has slapped the toque off Thomas Keller’s head. The classically-trained chef may have been tempted to throw a handful of his famed “oysters and pearls” dish at the kitchen wall (or his chef de cuisine, Eli Kaimeh) when he read about his mushroom bouillon compared to bong water and his butter-poached lobster as “gristle of the sea.” He’d become used to Per Se being lauded as one of the country's top restaurants, but now his cuisine is being called “random and purposeless,” “dismal,” and even “dispiriting.”

Wells disdains hype and pretention. He took down celebrity chef Guy Fieri in a 2012 review of his Times Square tourist trap, Guy's American Kitchen & Bar, angry that Fieri was running a high-priced bait-and-switch operation. It's unlikely that Thomas Keller will commit suicide as 52-year-old French chef Bernard Loiseau did, in 2003, when he thought his restaurant was going to lose a Michelin star, but he'll have to regroup now. His prices are suddenly looking much higher. Though few talented chefs have to deal with his current level of public shaming, this is just the most recent, and very high-profile reminder of the decline in what is called “fine dining” in the industry.

Luxurious dining is in the midst of an identity crisis, and Wells touched on a few of the reasons. The lady who threw her napkin down never got another one from the server who picked it up, a serious breach of protocol in restaurants far less pricey than Per Se. He mentions the prickly attitudes of other staff members as well—in particular an argumentative sommelier—and anyone who’s had experience with exclusive restaurants knows that some try to make you feel lucky to be dining there.

People are seeking out more comfortable alternatives. The challenge facing fancy restaurants is that there are more and more places that sell quality food, all the way down to the food truck. L.A’s Roy Choi, who trained at the Culinary Institute of America, is a food truck pioneer, now running a fleet of five Kogi Korean BBQ trucks selling his renowned $2.25 fusion tacos where Mexican meets Korean. For next to nothing, you get a flavor bomb short-rib taco on a corn tortilla with crunchy slaw, with no attitude and no tip required.

I recently ran into a chef who’d operated his restaurant for six years here in Richmond. His place emphasized the “farm to table” approach, using local purveyors that's currently so popular. The problem, he explained, is that these ingredients are very costly, requiring him to charge prices that customers balked at. As he's committed to these ingredients, he wants his next place to be much more casual and affordable.

The writing’s been on the wall for some time now. Pete Wells just added his two cents in boldface.