A Tale of Two Weed Dealers

Medical marijuana’s elephant in the grow room: the poor need not apply. 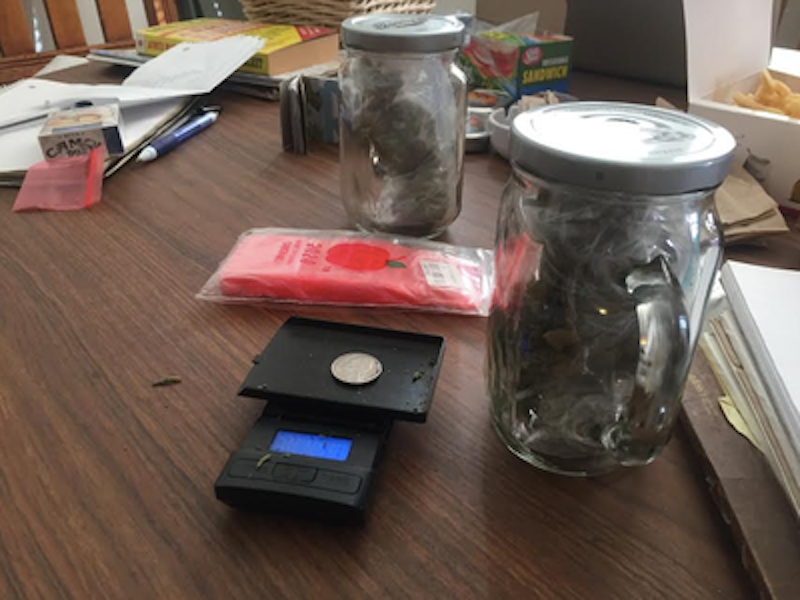 Dust from the unpaved road that horseshoes through Clyde’s trailer court swirls into dirt devils in the high seasonal gusts. The trailer from which he deals high-grade black-market marijuana is in a derelict fringe of Albuquerque’s city limits. Clyde’s not his real name. It’s the name of a high school buddy who died in prison, he explained, while serving a 17-year sentence for robbing a 7-Eleven.

We shoot the shit over Chicken McNuggets and fries as his clients pop in and out. Clyde’s a 57-year-old Army vet who’s been smoking weed for over 40 years. He sells enough weed to just get by, and he’s able to do it under the radar. He’s got a pretty quiet place, set back from the street. The street might not look like much, but it’s quiet. The biggest crime I’ve seen in his neighborhood is dogs off leash, patrolling the sad dirt drive for strangers.

One young woman comes in, a cute brunette, mid- to late-30s, in a Slipknot t-shirt. It’s the most un-After School Special-iest drug deal ever, for $10 worth of an illegal plant. Before she got there, Clyde told me she’d been diagnosed with advanced breast cancer. She describes the biopsy to him, how they had to go back in for more tissue three times because they kept fucking up. Clyde the budtender, listening and offering kind words of support as he weighs out an extra-fat gram. She was in pain, and she wanted some weed. Luckily, she was in a state with medical marijuana. So why buy on the black market?

To get on the program, you have to get documentation from your doctor proving that you have an approved diagnosis. Then you have to pay around $150 to a medical marijuana doctor who’ll fill out your paperwork and hand you an envelope to mail to Santa Fe. Then you wait to see if your card even arrives. It could take weeks. It might not come at all. There’s no way of knowing until you get either the card or a letter saying you were turned down.

There are plenty of roadblocks in New Mexico’s cannabis program. Even if you do get your card, you have to go through the same exact routine to renew it each year. Dispensaries are hard to get to on the bus because they’re tucked away in industrial and office parks. And medical weed is more expensive than black-market weed. The current New Mexico state limit of 450 plants per producer limits availability, which drives up prices. Colorado is less stringent, and its medical prices are as much as $6 less per gram.

“It’s not a perfect circle yet,” says medical marijuana seller Jay Steinberg. “We have four dispensaries. Patients are demanding more, and we can’t facilitate it. By the state keeping plant count low, these dispensaries are becoming high-THC dispensaries. I don’t see why this non-toxic vegetable has to be restricted. I don’t get what they are trying to protect. Nobody’s abusing it, nobody’s black marketing it, because it’s widely available,” he says. “It’s actually changing the black market. More availability lowers the prices. Look at Colorado. Their medical is much cheaper than ours.”

Steinberg owns a hippie store called Birdland in the heart of Albuquerque’s Nob Hill neighborhood, one of the state’s busiest retail centers. A Day-Glo VW bus sits in the window of the place, which he opened in the mid-1990s. He’s seen his retail sales steadily fall since the 2008 crash. Black-light Bob Marley posters just weren’t paying the bills like they used to, so he started looking for a partnership with a pot group. Steinberg’s now under contract with a major medical marijuana outfit called Ultra Health, which is getting ready to open a dispensary inside his store. Steinberg, like Clyde, has been using marijuana for over four decades. Now he’s seeing his hippie dreams come true, in a fashion. And he’s protected by the law, unlike Clyde.

The young cancer patient in Clyde’s trailer can’t afford to be on New Mexico’s medical cannabis program, but she can afford the occasional dime bag “on the street.” Here’s the big fallacy of medical marijuana: it’s only for the middle class and above, and the rest of you, no matter how sick you are, are still subject to arrest and no relief from illness. That’s sick.

That’s perhaps why the black market still thrives. Clyde sees medical marijuana as a farce, and he’s not alone. The federal government’s approach to weed, keeping it on the Schedule 1 list even as it holds a patent for its many medical uses, is “statutorily untenable,” as J. Thomas Press puts it. The publisher and landscaper had overheard Jay Steinberg and me talking about legal weed over coffee, and he leaned toward us to drop some wisdom. Our lives are essentially “written on pieces of paper,” he said. Our drug laws—and, by extension, all laws in general—are a fallacy we live under. He doesn’t believe there should be medical marijuana or even recreational marijuana dispensaries. People should be allowed to grow any plant they want to without registering with or paying fees to the state.

Clyde has similarly anarchist leanings, plus a violent vision of a future in which officials are put to death by the fed-up masses. He even wrote a 42-chapter science fiction novel during his last stretch behind bars. He shows me the stack of legal pads, whose pages, front and back, are filled margin to margin. His novel is called The Misanthropic Man.

“I know for a fact that those people will kill you,” he says, referring to any weaponized agent of the state. “They have absolutely no fear of putting a bullet in anybody because they have impunity. Even if they get convicted, their sentence is going to be lenient. They’re protected by a phony government. Our government is filled to the brim with criminals. If I had my way, I’d go to D.C. with a million and a half people and drag those criminals out and hang ’em. They have sold us down the river. They sign these stupid agreements and then these cities filled with hard-working people making washing machines are out of work, and these people in Juarez are making 25 cents an hour making washing machines. The machines cost the same, but suddenly these big corporate fools are putting more money in their pockets and the people in these cities are thrown in the unemployment line.”

There’s a really thin line between criminal and legal, in his mind: “If that’s not criminal, there’s no such thing as criminal, and that makes what I do okay.” Clyde shows me his ledger, which contains dollar amounts next to names. He’ll occasionally front small amounts of weed to broke customers, and proudly proclaims that he’s collected all but just a couple hundred dollars in debts over the past year. He also charges sick customers less, and gives plenty of weed away to those who need but can’t afford it.

He talks of getting arrested years ago while transporting several pounds of weed across state lines. State police conducted an illegal search of his rental vehicle, he says, which was caught on police dashcam. His judge, who acknowledged the civil rights violation, gave him the choice of sitting in jail for a year awaiting trial, or accept a felony conviction and get released that day. He accepted the latter, and may never get the chance to vote again.

“To me, that felony conviction is like a military medal,” says Clyde. “I’m a veteran in the war on drugs. I’ve been fighting this battle for 44 years, and I will continue to fight in this battle till the day I die.”