I don’t shop there, but it’s their choice to open on holidays. 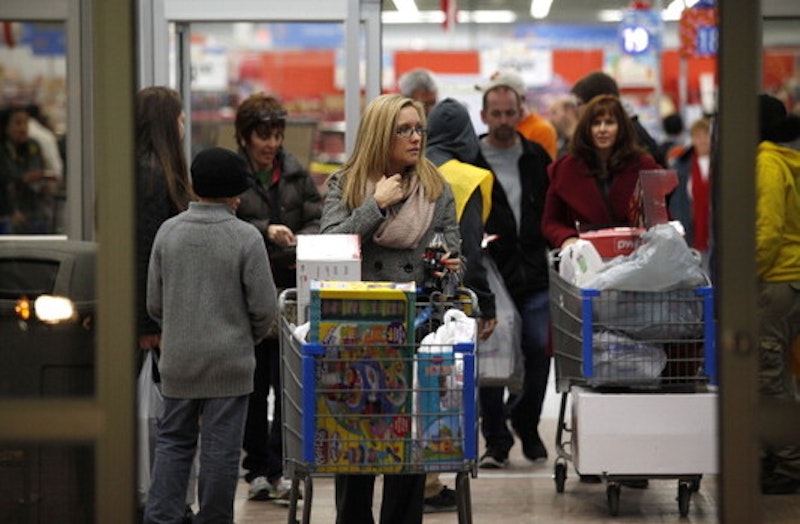 I was a good Scout on Small Business Saturday last weekend, confining my limited rounds to Sound Garden in Baltimore’s Fells Point neighborhood in the morning, then accompanying my wife and son to The Charles to see the extraordinary Judi Dench-vehicle Philomena, and finally ordering carryout chicken salad wraps from Hampden’s Bella Roma for dinner. I did purchase a large—sorry, vente—iced coffee at Starbucks around noon, but since that behemoth has, hypocritically, escaped the ire from the anti-corporation activists, my name shouldn’t be on any present-day Madame Defarge’s list. Also, our family, eschewing the traditional cooking/cleaning/leftover bonanza that’s bizarrely fetishized on Thanksgiving Day, went out for seafood at the stand-alone Kali’s Court, so that’s another power-to-the-people brownie point for yours truly.

Not that I’m really keeping count or was in any way immersed in the news of sparsely-attended protests against the likes of Walmart, Best Buy and J.C. Penney, or any of the other stores that had the audacity to open on Thanksgiving. Several weeks ago a strange post was shared by a lot of people on Facebook that I found vaguely offensive. It read: “Because I believe in family, I pledge to NOT SHOP on THANKSGIVING. If I’m shopping, someone else is working and NOT spending time with their family. Everyone deserves a holiday.” Never mind that I stopped signing petitions around the time Patti Smith’s Horses came out; the gist of the “pledge” struck me as authoritarian, and that’s for the birds. As it happened, I didn’t shop on Thanksgiving, by choice, and if others wanted to get tangled up in crowds looking for bargains, well, that’s a decision that’s certainly none of my beeswax. As for those who were forced by employers to work on a holiday, I’m sure there was grumbling, but it’s a deal they made upon taking the job.

Indeed, I’m old enough to remember silent holidays, commerce-wise, but that was a lifetime ago, back when the birthdays of Lincoln and Washington were celebrated separately, on Feb. 12 and 22, respectively, and kids got a day off from school on each occasion. None of this Monday holiday jazz, a long-weekend convenience that I’d swear was pushed through by a weird alliance of labor unions and retailers, and is especially galling when Memorial Day—now considered the “start of summer”—isn’t observed on May 30. And in an era of reduced civility—cell phones buzzing at restaurants, TV shows glorifying humiliation, the popularity of BuzzFeed—that chain stores con people into thinking they’re getting “deals” on Black Friday (and now Thanksgiving itself) is hardly the number one example of a crass and coarse United States.

And let’s be honest: part of the attraction of Black Friday is the weird spectacle of it all. I never did it myself, but it’s not all that different from the thousands of people who used to line up 24 hours before tickets for a Stones or Springsteen concert went on sale. My son Booker and a high school friend took part this year, departing at 11:30 on Thursday night, and mixing with the throngs of shoppers at Best Buy and Walmart in Baltimore County; they didn’t buy anything, but stayed out until five in the morning and enjoyed themselves immensely. Beats me, but if that’s what passes for fun today, it’s not my place to pass judgment.

Naturally, there was a lot of social media clutter last week from arm-chair activists who railed on about “living wages” and solidarity with their brothers and sisters who are enslaved by not only Walmart, but the fast-food chains like McDonald’s, Wendy’s and Taco Bell. According to a New York Times story on Dec. 2, more protests and strikes are planned for Dec. 5, the illusory goal of which is to force the corporations to raise the minimum wage to $15/hr. Good luck. I applaud any sort of worker or political dissent—a worthy example of American democracy—and sympathize with those who’ll brave the cold, not to mention possibly losing their jobs, but this gambit is unlikely to meet with success. In the event there is strong support for the cause, and companies do capitulate even a bit, the result will be a trimming of the workforce, and more unemployment.

Could be I’m out of touch and President Obama in the flesh will lead a rally at a Chicago Burger King—a rootsy diversion from his political troubles—and that would be pretty cool. Meanwhile, I’m wondering if this is the year that the commercial barriers on Christmas Day itself will be shattered, and the Three Wise Men will be spotted at a CVS looking for marked-down holiday wrapping paper.