No Cheese on Our Macs, Please 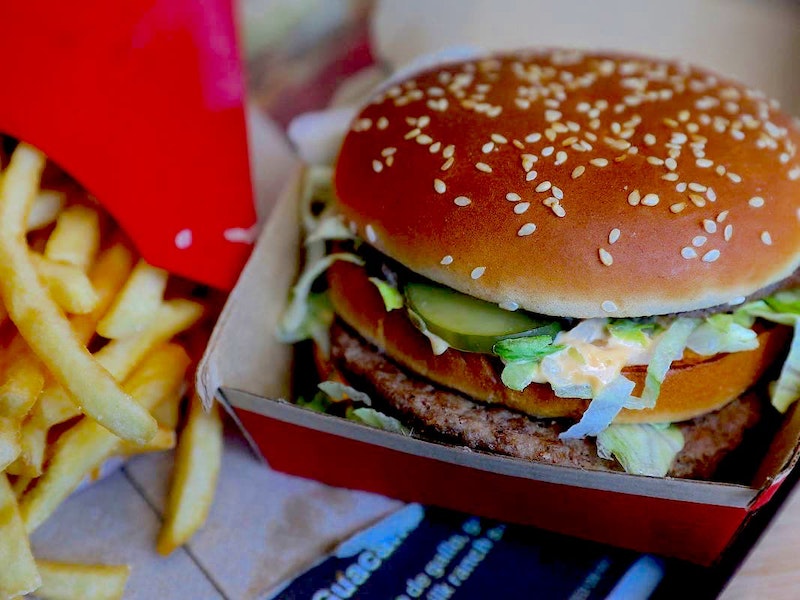 On our way to pick up our sick, drug-addicted cousin beneath the bowels of New York (beneath the bowels; I can only imagine the smell), my husband and I ended up in Bowling Green, Kentucky. “Are you TRYING to get us lost?” No, I told him, but I do have ulterior motives. A) I don’t like Bennington. This is known. B) I do miss traveling, and while a road trip across parts of the Eastern and Middle United States is not exactly Brussels at 10:30 and Paris at noon, it’ll do for now. We’ve found vegan restaurants as well as fast-food chains that give us free dippings and non-“poultry” affiliated treats. Traveling brings out the primate in everyone, even roosters and hens. God strike me down if I didn’t get tempted by the Big Buford at Checkers. “But Monica, it’s allowed,” Rooster said, “it’s a hamburger. You’re in the clear.”

I reminded him that the Big Buford contains mayonnaise. It was devastating—for both of us.

“Monica, will you shut up, please?” We were waiting in line at the McDonald’s drive-through assembling our Big Macs. Without the cheese, this is our most decadent “bird safe” treat (we’re agnostic on the special sauce. I maintain it’s just tanned ketchup). Rooster can be uncharacteristically rude when we’re traveling, and he was screaming at the drive-in attendant to “make it snappy.” Where did this come from? Had he been talking to Bennington? Bennington treats service workers and women in general like garbage—maybe Rooster’s reconnecting with his cousin on a phone I don’t know about. Maybe I should’ve looked in the glove compartment. But I was too concerned with getting my Macs.

“OKAY LISTEN LADY I’M GONNA NEED—YES, SORRY, MA’AM, HI, HOW ARE YOU, GOOD EVENING, RIGHT—I’D LIKE TWELVE BIG MACS, NO CHEESE, I WANT TO BE VERY CLEAR ABOUT THAT, ABSOLUTELY NO CHEESE ON THESE HAMS. DO I MAKE MYSELF CLEAR?”

Silence from the intercom.

He continued. “I SAAAAAAID, DO I MAKE MYSELF—”

Rooster was still heated when we got our Macs and started vulgarizing them in the backseat. “The woman should know better.” I reminded him that there was an employment shortage. “Yeah, I KNOW! People need to get off their butts and work more. Bootstraps.” I reminded him that nobody was paying nearly enough for people to survive. “WELL THAT’S THEIR PROBLEM. Look at us! We scrimp, save, and steal! Anyone can do it. Anyone can live.” He ate his last Mac, eight of eight, gazing out the window at the moon. “Sometimes I think I can talk to God, and that he watches me from a big perched chair with elephants and epaulets on the bright side of the moon. And you know something, Monica? Most days I know that’s what God’s doing. He’s looking out for me. He’s looking out for us.”

I let Rooster chow down on his Mac and crash into the inevitable calorie assault of the bread and meat binge. I’d wait until the next morning to tell him that I was leaving him, and that I’d take the car and the cash, and that he could find his cousin Bennington on his own. Lord knows he’s learned enough from him already. I’m sure they’ll make a perfectly happy couple down there—underneath all the shit of the city.