The Importance of the Crazy Cat Lady Action Figure 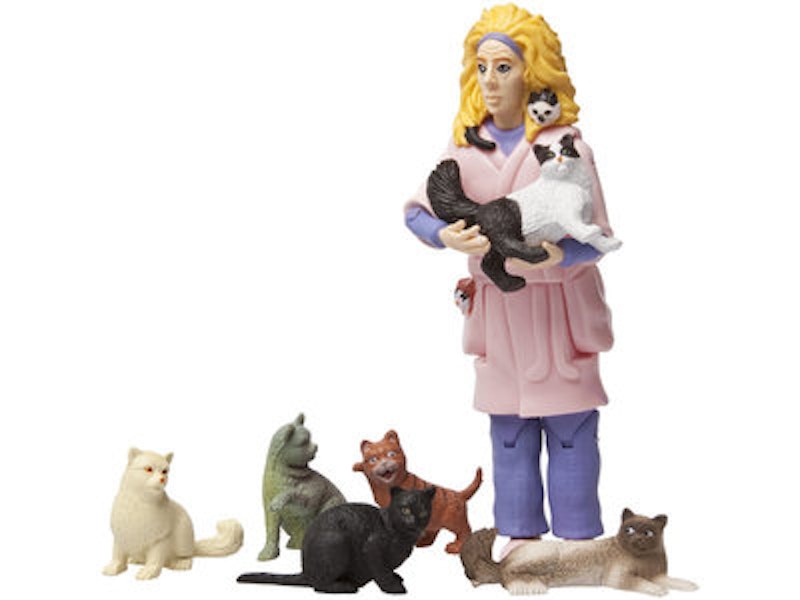 I emailed Santa for this Crazy Cat Lady Action Figure because it appears that the cat hair-covered life may be my future. I have a meager start since I live with two cats. I had a greyhound who kept me somewhat balanced, but he died. I had some husbands, but we won’t talk about them.

This Crazy Cat Lady Action Figure is an educational tool. Having raised two sons who don’t call their mother often enough, I know that part of the reason we play with toys is to prepare for the future or cope with life. Girls play with Barbie so that one day they can aspire to have an unnaturally tiny waist only achieved through waist trainer corsets. Through Barbie, we learn the value of designer clothes and keeping a dead expression on our face to attract the boys turned men who pretend to be some Star Wars character.

When I was a girl, Santa brought me an Easy-Bake Oven. I learned how to bake a cake because before we became enlightened; we thought the way to a man’s heart was through his stomach. Now that I’ve seen the error of my ways, I barely use my stove unless it’s to make frozen pizza.

Women and girls don’t have enough action figure role models. The Crazy Cat Lady is inspirational. She’s wearing a bathrobe and pajamas. I consider that a positive reinforcement, it shows women that your identity is not defined by fashion. It’s also my uniform.

The plastic version of a woman who loves cats does seem somewhat stressed out, given the expression on her face. Perhaps it’s because she knows the truth; that cats are existential nihilists. They let it be known that humans are insignificant. Our life has no intrinsic value, other than to provide for their needs. The more cats you have around you, the more you start to realize this, and in a way it makes it easier to live. You can just leave your search for meaning in the bookcase. After your cats have scratched up all the spines of your books, you can’t be bothered searching for the answer to those heavy questions.

Despite their arrogance, I’ve done a lot for my cats. Years ago, I gave one a miniature sized hand job to save his life. More recently, I gave my cat an enema with a plastic mustard bottle when she was constipated. That’s love.

Crazy Cat Lady Action Figure is wearing thick black eyeliner around her lunatic eyes, but maybe she was too drunk to take off her makeup. Just because you have a lot of cats doesn’t mean you can’t get crazy in a good way or have a wild sex life. You just have to push them off the bed because cats are voyeurs. Also, men aren’t crazy about cats being around when they are naked because their dangly bits look like cat toys to a feline.

Owning a cat isn’t a complete deterrent to getting laid. Saying you have a cat is a great pickup line because it always leads a guy into saying, “Can I see your pussy?” Always. Therefore, having more than one pussy must be a positive.

I’m already on my Crazy Cat Lady path. Yesterday, I went shopping at Wal-Mart, a store I boycotted for decades until I moved to a small town where being a crazy cat lady a badge of honor. Wal-Mart it is the only place in town to shop for things they don’t have at the dollar store, like giant cat climbing things, or PJs with cats on them.

I changed out of my PJs into old leggings to go shopping because I have some pride left. Stretch pants, leggings or clothing that shows camel toe, or anything else people don’t want to see is de rigueur for shopping at Wal-Mart. While bent over loading my purchases into the trunk of the car, my cat hair-covered leggings fell down because the waist band is stretched out of shape. I managed to pull them up before the people in the parking lot caught a glimpse of the large tattoo of a skull on my ass, so I think I’m safe from becoming memorialized on People of Wal-Mart.

After I got back in my car, I noticed that Santa had texted me. “Set your sights higher,” he said, “why didn’t you ask for something in the Tiffany blue box? That’s what all the other women ask for.” Tiffany describes this iconic container as “an international symbol of style and sophistication.” I do like that custom shade of Pantone 1837. I’ve had presents that came inside that magical box, but jewelry doesn’t keep you warm at night like the loving arms of a man, at least that’s what I remember. I’ll settle for the crazy cat lady substitute of a purring blanket of felines. I texted Santa back and said that the only box I wanted was something big enough for my cats to play in.