Restaurant dining is gone for now, so I can only dream. 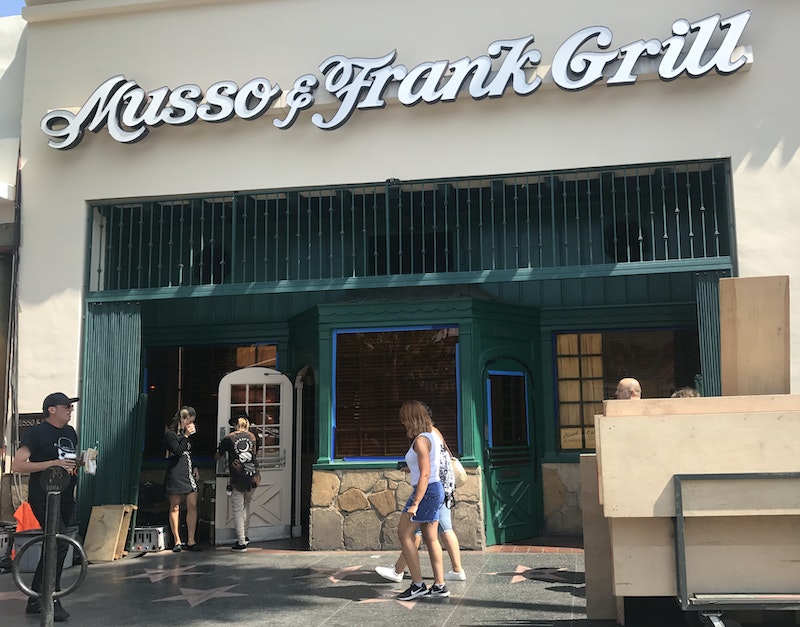 I've always been fascinated with restaurants. They’re seductive. My earliest restaurant memory is of my grandparents taking me to an old-style Italian place called The Balloon in Auburn, New York. It was right across the street from the high-walled state prison. I was young and just remember being thrilled about the entire experience. This is how to live, I thought.

Dining out is fun, but we're currently stuck with take-out. So I'm left to seek my restaurant pleasures vicariously. I have a particular fascination with restaurants that have been in business for decades. Their servers are often formally-dressed older men who've worked there for many years. The menus are large and heavy. I've dreamed up an imaginary tour of a handful of these beloved places—pretending that they're still open to sit down in—and that will do for now. I've also included a couple of places that once occupied a prominent place in the culture but are now closed.

I'll start this culinary adventure in the Pacific Northwest. Seattle's celebrated Canlis (two Michelin stars), the city’s fanciest restaurant, has been run by the same family for nearly seven decades. Up on their hillside perch, they pay immaculate attention to every detail, making every customer feel special. The atmosphere at Canlis is refined, so I'd dress accordingly. As I relaxed in the white-tablecloth dining room and enjoyed the impeccable service and one of their famous souffles, I'd be treated to stunning views of Seattle, Lake Union and the Cascade Mountains. I'd order chef Brady Williams' signature dish: barley porridge with geoduck, green strawberries, and shiso. I'll be visiting a couple of places specializing in traditional cuisine, so now's the time to let a creative chef wow me with a little Pacific Rim razzle dazzle.

I'd then head down to San Francisco, traveling back in time to dine at the now-shuttered Stars when it was at its peak, starting in 1984 when it opened as a sexy shrine to California Cuisine. Stars was chef Jeremiah Tower's spectacular reintroduction of American regional cooking at a time when French chefs reigned supreme.

I could make the argument that Stars was the greatest restaurant in American history. Tower was a major force in getting Americans to fall in love with their own cuisine again. The Harvard grad with the aristocratic bearing was a genius chef whose technique was pure and gimmick-free. He excelled at juxtaposing flavors, and forged a path of his own using local ingredients, of which California had a bounty. For starters I'd have cornmeal blinis with lobster. The main course would be duck breast topped with mango and chili salsa. It's innovative combinations like that that showed other chefs that they were free to leave the classics behind and follow their imaginations.

Maybe I'd hang out at the bar until the wee hours, and perhaps catch a glimpse of Rudoph Nureyev or Luciano Pavarotti. When Tower felt playful, he'd put hotdogs and sauerkraut accompanied by champagne on the menu as a late-night snack. I'd probably finish the evening with that.

Next, I'd got to Los Angeles. My first stop would be The Musso & Frank Grill, a place so old that it predates the city’s most iconic landmark—the Hollywood sign. If you've seen Once Upon A Time In Hollywood, this is the brown and red place where Rick Dalton (Leonardo DiCaprio) and Cliff Booth (Brad Pitt) meet with Marvin Schwarzs (Al Pacino) to discuss Dalton's future in the movie business.

Open since 1919, with a menu that's barely changed, Musso & Frank is Hollywood's oldest restaurant. It's a masculine place—a piece of culture on an otherwise desolate stretch of Hollywood Blvd. I'd settle into my red booth and order their legendary martini from my red jacketed, bowtied waiter. I'd start with a Crab Louie followed by a steak cooked on L.A.’s oldest open-fire grill, imagining Charlie Chaplin and Raymond Chandler once doing the same. I'd take a selfie at the old-fashioned phone booth. The meal would be fine. It would hardly be avant-garde, but I don't always want adventurous dining. It would be like a Ron Howard movie, not a Jim Jarmusch film.

I couldn't leave L.A. without hitting the iconic Dan Tana's, another dark, red-booth place, located in a yellow bungalow on Santa Monica Blvd. in West Hollywood since the 1960s. The décor is Christmas lights all year round and Chianti bottles hanging from the ceiling—tacky yet endearing in a nostalgic way. The food's red-sauce Italian—reliable classics. Every entree comes with a side of pasta. That's how old-fashioned the place is. I'd start with the garlic-laden, tangy Caesar salad prepared in the dining room. That's L.A.'s most famous salad. Then I'd go with the chicken parm accompanied by a penne arrabiata. We're talking about a Steven Spielberg movie, not a David Lynch film.

Heading to New York City's Upper East Side for the final stop to visit Lutèce, I'd go back in time once again because the legendary French restaurant closed in 2004 after opening in 1961. A panel of food critics for Playboy once proclaimed Lutèce the best restaurant in the United States, and Zagat's survey ranked it at the top for six consecutive years in the 1980s when French gastronomy reigned supreme.

Lutèce, as one of the last bastions of grand luxe dining in New York, had plenty of cultural cachet. With Chef Andre Soltner, perhaps America's first superstar chef running the kitchen, it quickly became integral to the culinary development of the United States. Soltner was one of the first chefs in the nation to emphasize the freshest possible ingredients.

I'd order the sautéed foie gras with dark chocolate sauce and bitter orange marmalade, and the onion tart that was soon copied all over Manhattan. Then the braised baby lamb with garlic for the main course, and tart Tatin to finish up with. While the cuisine at Lutèce was elegant, the place still had a warm, inviting atmosphere. Sipping on a Cognac, I'd want to extend my stay as long as possible because when I leave I'm coming back to the present. And the present is what this whole culinary tour was designed to forget for a brief time.