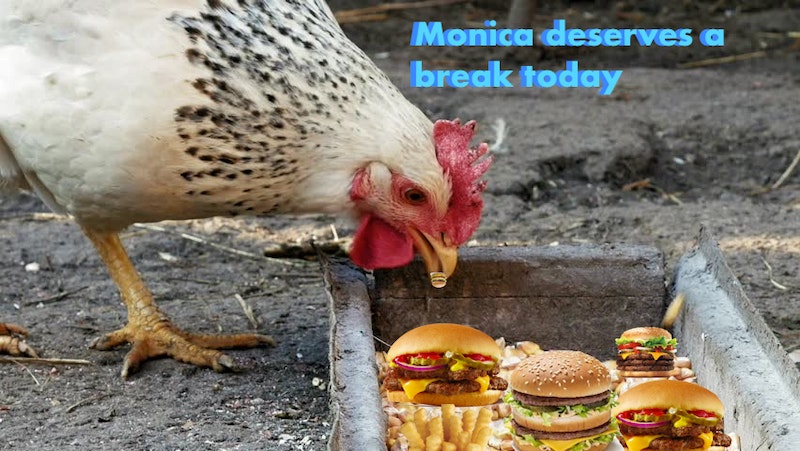 Yesterday I found myself craving a burger. With bacon. Scandalous, no? You may ask, “Monica, how could you possibly eat a hamburger with bacon? That’s two different animals—dead, cut up, and processed inside of you. Not to mention all the delicious vegetables and condiments atop the resplendent entree. No tears do I cry for the lettuce, or the tomato, or the cucumber that became a pickle that became a shit pellet, or the ketchup and mayonnaise so lovingly extracted from sources we need not discuss here. I want bell peppers dripping with special orange sauce, that Thousand Island superior shit, the kind of sauce that makes you want to beat the shit out of your own grandmother. Why? Because she never told you life could be this good.

I’m doing well in quarantine. Rooster and I haven’t had a row in over a week, and Bennington has contented himself to the shack out back and is finally learning how to read (we started him off with Dr. Seuss and he’s already moved up to Shel Silverstein! Learning can be so much fun). We’re all cooking more and eating together. On Tuesday night, we played a round of Chinese Roulette—otherwise known as “Good and Welfare” by Russ Smith—also known as The Truth Game. In our version, the players must be operating on a full stomach. There’s something different in the psychology of the fed over the hunger, a comfort and a calm that brings about the truth more easily from previously unseen depths. We used to just use chloroform and laudanum, but times, unfortunately, have changed.

A good game of Chinese Roulette can last until the sun comes up. Such was the case the other evening when Rooster and Bennington litigated their entire lives together. Their relationship was so contentious and fraught with remembered and long held grudges, mea culpas withered past use, and an ambient anger that suggested they were fighting for something, the same thing, but whatever “it” was escaped me. Bennington met me long after Rooster and I had eloped, so it couldn’t be filial jealousy. There was no way Bennington had been so cruel to me through the years simply because he was trying to flirt with me—he’s that kind of stupid boy, but I know he doesn’t like me. In any sense: as a person, as a friend, as a fuck. Bennington and I don’t get along.

Nevertheless, I must recognize that he’s a sentient being with feelings like pain and frustration. Life is full of obstacles and challenges like this. The Lord is listening, and he’s always watching. Just as sure as the Seamless-UberEats-Instacart-GrubHub-DoorDash nexus knows when you’re “hungy,” “hangry,” and “hongry” (don’t ask me to explain these vile terms—they’re an affront against God). We’ve only ordered online delivery to the barn once, and it was a disaster. Rooster wanted pizza. I told him it wasn’t vegan, that it wasn’t healthy, that it came from cows (true). This was back when I was on a real health kick, and I was mad at Rooster for some reason I can’t remember, so I told him that pizza caused cancer. “Now I must eat it.” I do love my funny hubby lovebird.

We’re all happy now that I allow everyone to eat whatever they like. But back to Benny and Roo’s brutal game of Good and Welfare: Rooster called Bennington a layabout and an agent of chaos. Bennington called Rooster megalomaniacal and pompous despite being fundamentally lazy and uncommitted. This game never came to blows but they were always on the edge of an explosion. They’re too similar to be apart, they need each other. Neither of them were wrong necessarily. I was just happy to be spared yet another lashing from Bennington’s ketamine-coated tongue, a rapier of ill-intent and poisoned missives best left in the days of English consumptives and sexually-deranged oil barons.

I wonder what kind of freaky sex goes on at the World Bank. What about the IMF? I bet they’re gettin’ jiggy with it right now—perhaps they are “kindof nice with it” as poet Emma Wenzel would say—totally blowing off the world and just trying to get as much hole as possible. Why not? “The world is ending, everyone says”—really? Where? Since when? I don’t see it… like and my family and I have written before, some of you have never lived through a global viral pandemic and it shows. But I have an answer for you: try your best to calm down, and just read our articles. The Quibbits family will always make you feel better in the midst of crisis because we were born in the irons of Hell and it’s from there where we reign.

Uh oh. Did I just “say the quiet part out loud”? If there’s anything I hate more than the novel coronavirus, it’s clichés. Everyone needs to stop saying “cringe” immediately. NO ONE SAID THAT A YEAR AGO! No one said people were “showing their whole ass” last year. These are new developments in the virus that is language. Resist it! Know that there’s a war on your mind. A very wise man once said this to me, and he continues to reiterate it to his millions of listeners in Texas and across the world. Maybe take some notes from those who warned about “globalists” long ago… would we be in this mess if Trump had actually built his wall? If he had been allowed? I’m not so sure.