Cashing in my coins and driving a Giant cashier batty. 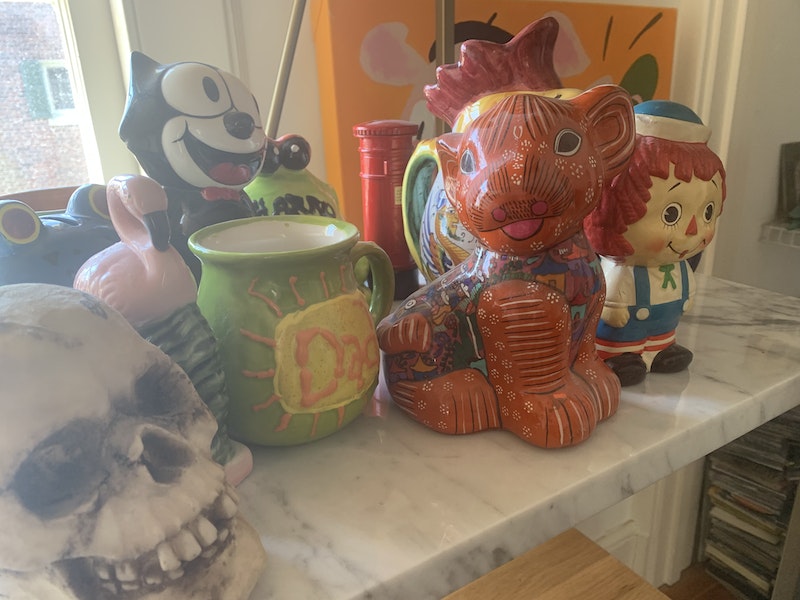 Last Saturday, as Booker and I were leaving the Giant supermarket in the downtrodden neighborhood of Waverly in Baltimore, a lippy kid, eight or so, asked me point-blank: “Hey, mister, can you give me a buck?” I was in a dizzy mood, and quickly replied, “Why yes, that’s a reasonable quest,” and handed over a dollar (to a grunt, mind you, no smile or thank-you). My son thought we should’ve given the well-nourished junior hustler $20 for his audacity, but there are limits. I’d seen the boy a few minutes earlier, jawboning with a Giant cashier, and he was pleading with her to let him slide on a $10 purchase, since he had just nine dollar bills. She laughed—maybe he’s a regular—and said, “Reggie, get your ass outside, I don’t have time for you!”

I don’t usually patronize this Giant—it’s a little out of the way, and gives me the creeps since it was built upon a string of razed rowhouse on E. 33rd St, just above Greenmount Ave., one of which included a place I lived for a year with college roommates Howie Nadjari and Billy McKey in the school year of 1975-‘76—and I’m still unfathomably bitter about the development. Then again, as I’ve written previously, the once-thriving Waverly, a thoroughly diverse collection of old-timers, immigrants, students and newcomers looking for affordable rent, with a lot of retail shops, bars and restaurants, went to the dogs once the Orioles moved downtown to Camden Yards, abandoning Memorial Stadium (a fine park, in my opinion, though perhaps that’s colored by the couple of years I worked as a beer and hot dog vendor there and found a new sphere of friends) ostensibly to attract Washington, D.C. fans—before the Nationals moved to Washington—as well as cashing in on the still-thriving waterfront development that began with the now-empty Harborplace in 1980. The current Orioles venue, opened in 1992, is still tops in comfort—maybe my favorite in all of Major League Baseball—although the sell-outs are a distant memory given the team’s almost-annual lack of success in this century, and now a crowd of 5000 is an event. I’d be surprised if the O’s, with a rock-bottom payroll of $30 million for 2022 are sold this year.

I’m traveling on crooked one-way streets here, losing my direction, a habit that doesn’t at all cause embarrassment, but now to the gist of this story. Years ago, when our sons were pre-teens, we had a biannual tradition of gathering all the “piggy banks” (in fact, as shown in picture above, varying receptacles) and emptying them one by one, picking through them like a hard-shell crab, looking for “rare” coins—all-silver quarters, wheat pennies, Liberty dimes, etc.—and we’d store the good ones in a plastic bag that’s now in the storage room adjacent to my office at home. It was laborious but a lot of fun (Booker was my main partner in this endeavor; Nicky got bored and my wife Melissa was oblivious to the joy of finding a rare, if beat-up 1939 penny (and worth just a penny), and among a headful of memories accumulated in 66 years, it’s one of the chart-toppers. Once the two-day job was done, Melissa—who wanted a taste of the stash—and Booker would find a Coinstar machine somewhere in Baltimore, and we’d split the proceeds, which, if it was a bounteous couple of years of painstakingly hoarding the coins, might yield $1200, or, if the job was done hastily, south of a grand. (That’s net: Coinstar takes an 11.9 percent cut.)

It's been around five years since Booker and I emptied the pigs, the Raggedy Andy, coffee cups made by the kids for Father’s Day, Felix the Cat, souvenir postal boxes and busses from London, and, I hate to admit, a “Big Apple” bank left over from our long residence in Manhattan. Booker’s grown, not so far from 30, and when he visits there’s little hunger for such a time-intensive activity. Also, I no longer raid my wife’s wallet for the scads of coins she keeps, and in an increasingly (and depressing) “cash-less” retail environment, fewer pennies, nickels, dimes and quarters are accumulated. Anyway, last weekend, I proposed to Booker that we simply dump all the containers into two jugs—we have enough “rarities” kept for posterity—and go to a Coinstar and divvy it all up. He readily agreed, and aside from carrying the very heavy jugs (my arms still ache) to the Jeep and into the aforementioned Giant, we had a ball. It’s a process: you empty coins into the machine, but it goes slowly, with periodic notices on the screen saying, “My, you have a lot of coins! Let us catch up,” but it’s pretty cool: as the coins are processed there’s a running tally of the amount, plus a breakdown of how many quarters, etc., and it’s not dissimilar to looking at stock prices during the day. The only difference is that you’re always in the green.

At one point—$869.59—the Coinstar said we’d reached the limit, spat out a receipt and “said” goodbye. Booker and I had both hoped we’d net a grand, so we weren’t about to stop. (Important note: the contraption rejects certain coins that aren’t compatible with the weight of current American currency. Which meant kick-backs of two dozen Canadian coins, a few British, incredibly one from Uruguay, but, best of all, two all-silver quarters, from 1935 and ’44.) While he readied the next jug, I took the receipt to a cashier and she did a double-take looking at the amount, said, “Hey, Sylvia, you ever seen something like this?” Sensing a little irritation, I cupped my hand, saying, “I know! I feel like I robbed a bank!” and the mood turned light. Meanwhile, Booker was pushing the next installment of loot into the machine, once we signed in again, and that resulted in $160.95, so we hit the goal. It took an hour, and as small pleasures go, this was a bright spot of the past month. We gave Melissa three crisp $50 bills, Booker took $200 and Mr. Monopoly got the rest. Everyone was happy: Booker said receiving $200 for an hour’s light work made him feel like he was in a union, perish the thought.