If You've Ever Been a Waitress

Only then do you truly appreciate restaurant wait staff. 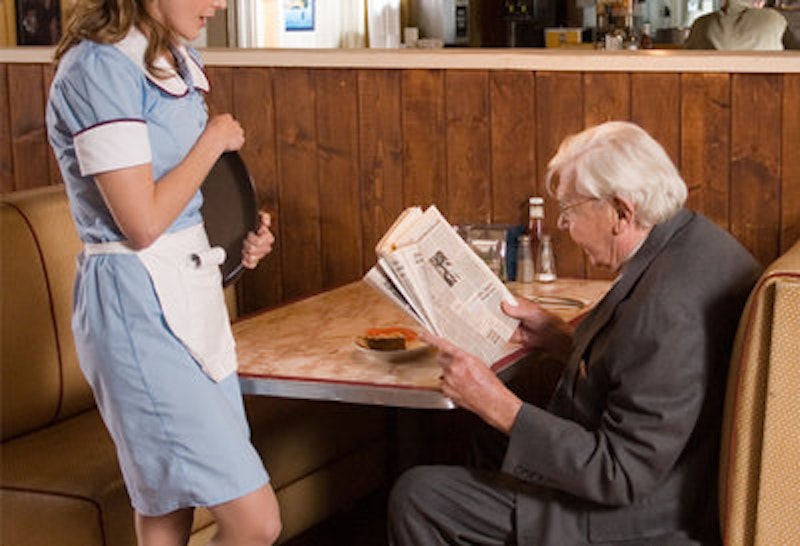 In restaurants around the world, there are those who treat wait staff like shit and those who don't. I recently ended a potential friendship with someone because I went out to restaurants with her three times and on each occasion, she treated wait staff like indentured servants: sending coffee back that “wasn't the right temperature,” dismissing our waitress to stupid, petty runs to the kitchen like some kind of diva dining celebrity, and even complaining to managers about bad service that in actuality was just normal service that didn't meet her unrealistic expectations.

I don't necessarily think it’s mandatory to have worked as a waiter or waitress in order to treat wait staff with kindness and decency, but it helps. When I was 16, I worked as a Friendly's waitress in the King of Prussia PA mall, America's biggest. It was busy. And it was nearly 30 years ago. But I still remember the difference between the people who treated me like a human and those who didn’t. It wasn't about tipping; really, it was more about how people spoke to you, whether they looked you in the eyes. I was working a few jobs saving up to pay for my college tuition, but who I was didn't matter to people who simply thought they were better than a waitress.

I'm nobody special now, I sort of believe nobody is anybody special, but I always over-tip wait staff unless they do something outrageously negligent. Nine out of 10 times I will give them the benefit of the doubt because they probably have too many tables, been working too many hours on their feet, and are dealing with a slow kitchen, so it isn't even their fault service is slow.

When I eat at a restaurant, I always know the name of the waiter/waitress if they supply it—and if they don’t, I usually ask—not because I want to get them in trouble later, but so that if I want more coffee or something, I can say “Hey, Trevor, could I please get a coffee refill when you get a second?” I appreciated it the most when someone remembered my name even though I was just the person bringing them their Orange Fribble, Jim Dandy sundae or clam boat platter. Big tips are great, but as a server, when someone remembers your name it means they are seeing you as an equal versus some kind of indentured servant who exists to accommodate their every whim.

Waiting tables is a suck job. It’s messy: once I had a tray full of sodas and ice cream sundaes and a kid grabbed his sundae off my tray, upsetting the tray balance and sending the entire liquid rainbow mess onto his mother’s white pants. Not my fault, but no tip for me. It’s hectic: there’s a scoreboard-style board with table numbers on it—the cook lights up the table numbers when the food is ready, and sometimes you look up and there are four table numbers lit because somehow all the food came up at once and you have to figure out how to get it all where it needs to go while someone asked for more coffee, someone’s waiting on a check, and there are people waiting to be seated and no hostess today. It’s thankless. This is America. We expect to be served, and served well.

The majority of waiters and waitresses aren't doing this job because it was a life's ambition. They're trying to make ends meet so that one day they can make their dream come true, or simply so that they can put food on their family's tables.