I Swear I'm Not a Drunk 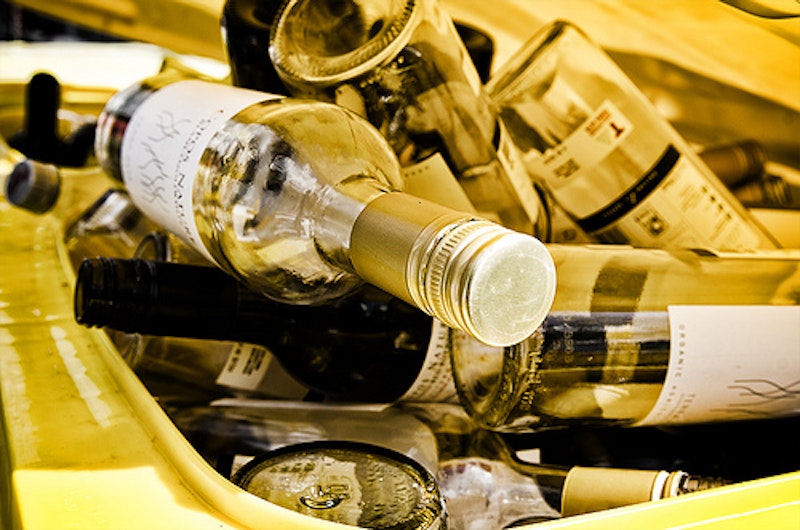 When you walk into my apartment you’ll see nine empty bottles of wine just sitting on the counter, but they’re from the past few months not just this week I swear. Inevitably someone says, “Damn you really like wine!” which, yes, but I just keep the bottles so I can remember the stuff I like.

Anyone who knows me well understands that I never used to drink alcohol. Never. I was the gay at the bar who always ordered cranberry juice or a soda or some other kind of non-alcoholic drink, and people always looked at me quizzically, “Are you not drinking tonight?” like I was positively boring for not drinking, like I’d made a poor life choice/would not be getting laid. It was either that or an “Oh wow. Congrats!” like I’d won some kind of prize.

Now my old friends see me out and are surprised to see Mizz Moore guzzling cosmos and mimosas and champagne and Bordeaux. “What happened?” they ask. “Welp, I moved to Virginia and got sort of bored so I had no choice!” And really there’s nothing more to it than that.

Before moving to Virginia I avoided alcohol like the plague. I never drank in college or even in graduate school, which probably leads you to question the validity of my arguments and talents as a writer since all writers are drunks. Being drunk off my ass and vomiting and having a hangover and being a hot mess out in society never seemed like reasons to drink, more like reasons to avoid the stuff.

But that was before I realized there was a difference between being completely wasted and having a drink or four because you enjoy the flavor. Now I love a nice red wine or a mimosa at brunch or an even more fabulous cosmo any time of day. I now know the pleasures of sharing a bottle of wine with a friend and talking about politics, relationships, cocks, etc. And actually, my friend Alexis and I used to meet up in New York and have wine and French fries at the bar, talking about boys, cocks, and just how much New York sucks and what we were going to do about it.

Looking back, I understand that I was actually afraid of alcohol because in a lot of ways I was taught to fear it. I thought alcohol was “bad.” I was paranoid that two sips would put me on my ass, because that’s what pop culture taught me. I’d seen too many examples of drunks in movies and was afraid of being uncontrollably ratchet, which is not a cute look on anyone.

People often rely on alcohol in social situations as a crutch. They’ll say they love drinking because it opens them up, makes them more sociable and reveals things about themselves that they didn’t know they wanted or could be interested in. I guess you could say I didn’t like that approach to life.

But probably more importantly is that I know myself well enough to recognize that I have an addictive personality. I was afraid of what would happen if I really liked alcohol. When I want something, I want all of it, right now. I was worried I could potentially drink myself into oblivion. Alcoholism is a serious problem.

I still find myself sending paranoid texts to my friends, “Hey, um, is it too early to have a drink right now lol?” to make sure I’m not headed down the path of alcoholism. But I hate even feeling the need to do that, because it just shows how deeply all that puritanical bull about being clean has impacted the way I think about and experience pleasure.