Busing Tables is No Joke 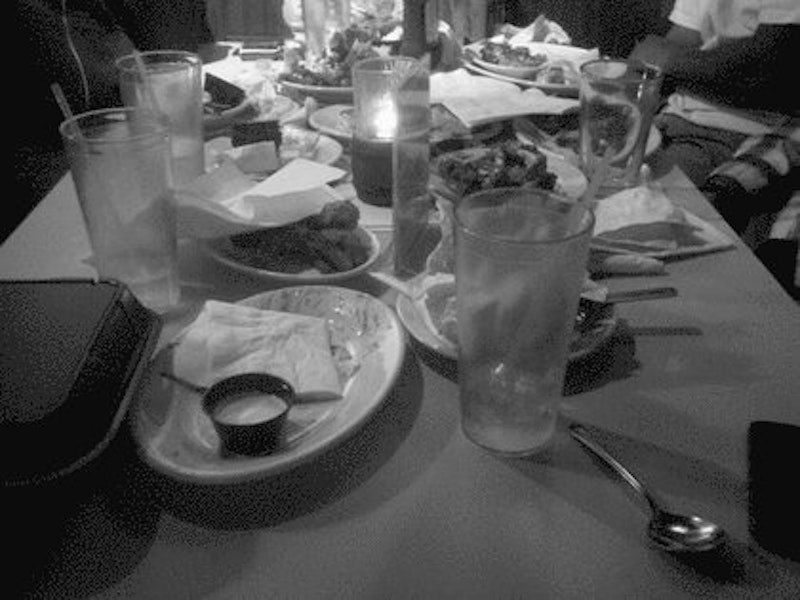 There’s a girl at the local restaurant I frequent who stands out among the staff. She’s impish, scrawny, eyes perpetually unfocused, and she walks with an odd gait. She seems too young to be working weekend mornings as a busser, though looks can be deceiving, and moves with an eagerness and furious drive that ought to be the envy of all of her co-workers. It’s impressive.

Game, as they say, recognizes game, and in this young woman I see a bit of myself. I spent a few years in high school toiling at a Towson, Maryland country club as a bus boy. When patrons arrived, I served rolls and water; when entrees had been consumed, I scooped up the plates and dishes and took them back to the kitchen. For private parties, I helped set up tables, laid out finery, and arranged chairs; later, I served coffee and cake and rubber chicken. Then I broke all that shit back down and got home crazy late.

I approached the task with a zeal that left my limbs aching and my work uniform reeking of grease, cigarettes, food, and booze by the time I made it home every night. It was not a dream job. It was not a distinct pleasure. It didn’t even pay especially well. Given that I had a first-row seat to witness the mistreatment servers were encouraged to bear stoically, I had little desire to graduate up to that level; I would eventually retreat to the kitchen to work as a dishwasher, but that’s a tale for another piece.

But it gave me something constructive to do with an abundance of spare time, enabled me to buy a scrap heap of a first car from my uncle, and taught me a great deal about how not to treat people who earn as much in an evening as you bill by the hour.

Everyone should treat other people the way we want to be treated, including wait staff, who are fallible and have feelings, too, even though some patrons like to imagine that they don’t. This is something I keep in mind at all times and in all situations, even when the kitchen has botched a dish or the hostess somehow fails to communicate to servers the fact that I’ve been seated a good 10 to 15 minutes after I’ve made up my mind what I’d like to order.

I always tip too much because I believe in paying it forward, even though I know the bussers are unlikely to see a dime of it. It’s a karma thing. I guess I like to imagine that even if the server doesn’t pass any of the tip to the busser, maybe the server, feeling generous and large-hearted, slips the busser a Slipknot CDR or a joint or a hand job after the shift. Hey, I’m an optimist.

If I’m out at a sit-down dinner situation, and there are dishes, I’m totally stacking some dishes up—my dishes, and yours. Be warned: I will pour crusts and leavings and crumbs onto one plate, and then pile the other plays underneath; I will group all of the glass and ceramic in a convenient cluster. And, no, I don’t care if you’re think that’s invasive, or OCD, or whatever else. Busing is a thankless business. It’s physical labor that most people don’t get tipped for, unless the waiter or waitress is an especially generous sort, and there’s no reason to complicate the work of someone whose job is already difficult enough as it is.

My most vivid memories of busing involve families of two or more children, where those children turned the table surface and the carpeting beneath into a Romper Room trash pit—straw wrappers, torn-up paper placemats, smashed crayons, you name it—because their parents couldn’t be bothered to care. When my son was younger, we collectively worked to leave our table almost as pristine as it was when we first arrived. It’s not cool to be a slob out in public any more than it is at home; there’s no excuse for that.