Fragility of the Restaurant Industry

How will a masked sommelier sell a $300 bottle of wine? 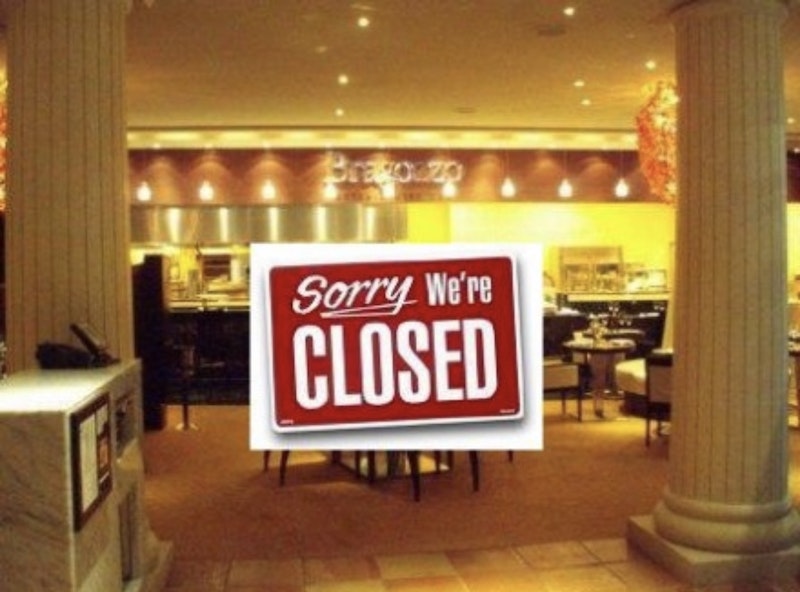 A few days ago, I went to a restaurant for the first time since the lockdown began—"back then," as they're already starting to call it. It felt good, although being the only customer was strange. I hope more customers start coming in, and have my fingers crossed that this place, which stayed open to serve take-out food when it had to close its dining room, will stay afloat. Some businesses that shut down completely when the lockdown began will never open up again―restaurant analysts are putting the figure at around a devastating 75 percent.

The coronavirus pandemic has highlighted the fragility of the restaurant industry, a condition that insiders have long understood. A glossy spread in Bon Appetit magazine may look impressive, but it doesn't tell the story of the often rickety financials that give the place that nice sheen. A few weeks ago, the local Panera Bread, which is located in an upscale mini-mall, announced that it was permanently closing. If a corporate restaurant, in a system that's always refining best practices for better profits, can't make a go of it then how will local stand-alone restaurants survive?

The answer is, "Adapt or die." It's simple, straightforward advice, yet not everyone is suited to heed it. Restaurant owners are passionate about their businesses in ways that corner grocery owners are not. That can make them inflexible. If you're in love with your restaurant concept and it's tied to your identity, or if you live for those special wine dinners and crave contact with your customers, you're at a disadvantage now. Restaurants conceived more as artistic concepts aimed at foodies than as numbers-based, sustainable businesses are going to have a harder time in this new business environment. Celebrity chef David Chang has already announced that he's shuttering two of his restaurants, despite the backing of a billionaire investor and the name recognition of one of America's most celebrated chefs.

Restaurants are vulnerable because they’re low-margin, high-overhead, cash-poor operations that were showing signs of unsustainability well before the pandemic hit. Small profit margins (often three to five percent, well below average for small businesses) mean that restaurants must sell at high volume, which is challenging with government-imposed 50 percent capacity limits. Some restaurants will raise their prices, but to retain profitability they'll have to explain their burdensome cost structure to customers.

The worst-case scenario is that independent restaurants are facing extinction, and that the fast food chains, with reserves of cash, will be the only survivors. The Trump administration, which has hosted representatives from McDonald's and other large chains in the White House in the past few months, has little concern for them. What does this president care about an Ethiopian restaurant or any place serving food from other "shithole" countries?  Chain restaurants, which operate on a different business model (e.g. they don't employ high-salaried chefs) often have 30 to 50 percent profit margins, which gives them a big leg up on stand-alone restaurants.

With luck, this scenario won’t play out. Viewed in a positive light, an industry that was already ailing now has a chance to reset, and it’d be a shame to rebuild it back to its former flawed structure. Amid all the doom and gloom, however, opportunities are popping up. The preeminent problem in the restaurant industry is high rent. A restaurant's success is often tied to a prime location, which is expensive. Typically, rent eats up 20 to 25 percent of a restaurant's total operating costs, while the general rate for a small business to be sustainable is around 10 to 15 percent. Landlords, previously in the driver's seat, are now willing to cut deals to retain their current restaurant tenants and to attract new ones for open spaces due to restaurant closings. Those spaces present an opportunity for savvy restaurateurs, as repurposing them for a new restaurant costs about half of what it takes to open one up from scratch.

Going forward, restaurants will need to think creatively and produce new revenue streams. Increased takeout, delivery and more catering are options, as is preparing kits for home-cooked meals that come with cooking instructions. A destination restaurant heavily dependent on tourists, but too pricey for locals, may rebrand to serve the locals.

It's important not to overlook the precarious position of restaurant suppliers, which are being hit just as hard as restaurants. If restaurant supply chains collapse, what will distinguish fine dining establishments from the chains? One thing that's certain is that the restaurant industry, the second largest in the nation, faces trouble. How are places that rely on an elegant atmosphere going to make that work when servers are wearing masks (or even gloves), the silverware’s disposable, and the smell of disinfectant is lingering in the air? How will a masked sommelier sell a $300 bottle of wine? Will the food even taste as good? Chefs rely on constantly tasting the food they're preparing and making adjustments accordingly, but they're going to find that challenging while swaddled in PPE.

But the biggest threat is most likely limited-capacity laws, which hurt the heavy weekend business that most restaurants rely on. That means that the longer it takes to develop a vaccine, the more restaurants are going to close down. Their fate is out of their hands.