The American version of the pro game is back. 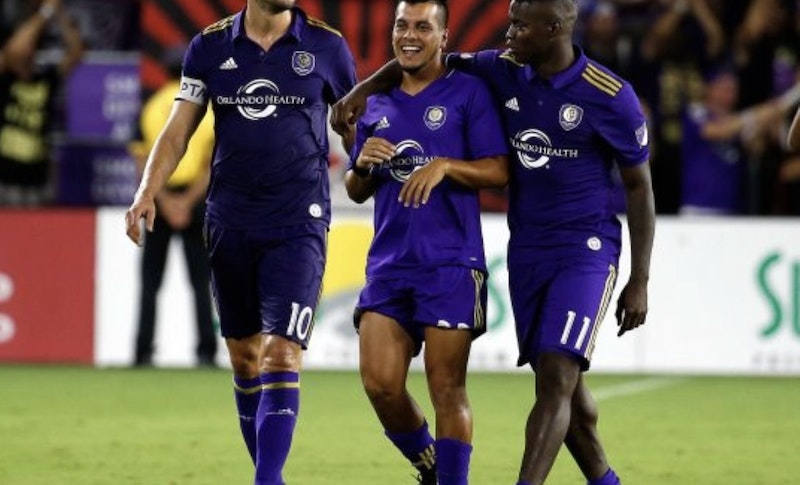 Someone asked me: Are you really going to watch the opening Major League Soccer tournament game between Orlando City FC and Inter Miami?

I was in my above-ground Esther Williams swimming pool cooling off after a Wednesday taxi shift that featured lots of seniors going to chemotherapy in Poughkeepsie. “Yes, I think I deserve that punishment,” was my answer, swilling some $8.99 Walnut Crest 2018 Pinot Grigio in a big Pirates promotional cup full of ice. I nodded to my tattered MetroStars flag hanging on the pool deck as sort of a privacy shield. Somewhere, Rhett Harty, the skinhead defensive midfielder for that inaugural MLS squad from 25 years ago, might’ve faced the same question.This was, after all, the mid-week “MLS is Back” tournament kick-off. It has group stages and gives everyone an equal shot at winning the underwhelming MLS Cup trophy which under normal, non-pandemic circumstances passes unnoticed like the Cockerton Cup box lacrosse trophy or the Doggett’s Coat and Badge rowing reward in England.

Someone online had the nerve to call this Florida rivalry the “Sunshine Classico.” To me, that would’ve been MLS’s Miami Fusion against the Tampa Bay Mutiny back in 2001, which is the last time two Florida franchises faced off on the pitch. Both those teams have since folded, yet the corporate shell game money-laundering mechanism of MLS has allowed more Florida teams to sprout out of the league’s ill-advised fungal expansion. Suddenly Orlando is a “city” like Manchester and Miami is Inter like it is Milan. Throw in the Beckhams and the deceptive Disney demographic and history repeats itself. Meanwhile, in a “bubble” tournament environment taking place at the ESPN/Disney Wild World of Sports complex in Orlando, just several miles from Orlando City’s own Camping World stadium in the bad part of Orlando, two MLS teams have dismissed themselves from the tournament thanks to excessive positive tests for COVID-19.

FC Dallas and the team from Nashville are now in the MASH tent getting urgent care from Alan Alda and Dr. Fauci. With temperatures in the high-90s with 1000 percent humidity, MLS has created a hell-on-earth performance environment not seen since the Irish national team was forced to play in Central Florida during the summertime slate of the 1994 World Cup. How could I not tune in? In the background of Wide World of Sports Field 17, where this game unfolded, is the towering structure of the Spring Training baseball park for the hated Atlanta Braves. Oddly enough, this same compound is where the NBA is creating a “bubble” environment in an attempt to restart Lebron James’ marketing campaign and motivational speaker infomercial.

The beauty of it all for MLS comes in the form of ESPN commentator Jon Champion, a north Yorkshireman with a giant vocabulary and all the candor of high tea served at Windsor Castle. He uses phrases like “ropey sandwiches” to describe the food inside the MLS bubble and words such as “disconsolate” that predictably baffle his dandy American counterpart Taylor Twellman. Both were calling this Orlando-Miami game remotely from the strip-mall confines of the ESPN main campus in Bristol, Conn. Twellman is Champion’s perfect foil, the dumbed-down American questioning the austerity and formality of the tweedy, overeducated Brit. Twellman never really blossomed as a U.S. national player and was an annoying presence on the New England Revolution MLS side. He wears undersized blazers and has TV hair and kind of follows the Alexi Lalas tradition of “let’s be a contrarian” when it comes to soccer commentary.

One of the main storylines about the Inter Miami MLS team is that David Beckham is a part-owner of the club. With the ESPN ticker running underneath the footage of this “historic” MLS restart of a league trying to celebrate 25 years of action, this flashbulb MLB moment ensued: “Sonny Gray named the Opening Day starter for the Cincinnati Reds.” Oh my God! Let’s order some Skyline chili!

It wasn’t until the 50th minute of the match or so that Beckham’s name came up. Champion mentioned the Englishman couldn’t get into the U.S. to possibly attend this non-event and was at his home in the Cotswolds in England (two a.m. local time as of this mention) and was tending to his new hobby as an “apiarist.” Right on cue, Twellman was all over Champion. “Why don’t you just say beekeeper?” was his beckon. Good chemistry in the socially-distanced booth. But then there was a nasty throat injury to a Miami player that took nine minutes or so to resolve as there was some confusion on the Disney complex on how to get the stretcher over the advertising banners and onto the field in a timely fashion. Miami was up 1-0 in the 47th minute on a stuff-in goal by Juan Agudelo, the Colombian-born New Jersey guy who has scored for the U.S. National team against South Africa and Argentina.

The six pitch-embedded ESPN microphones Champion kept mentioning captured their share of off-color language, including the f-off expression from Orlando City striker Chris Mueller, a feisty Midwesterner who netted his 10th career goal for his club to equalize the match at 1-1 in the 70th minute. The excessive on-field audio with the coach’s barks and the players banter had the feeling of attending a whacked-out auction of sorts, with bids been thrown about willy-nilly and call and response ever so slightly delayed. There were a few major soccer legends like the well-traveled Portuguese star Nani for Orlando, or the sublime Mexican standout Rodolfo Pizarro who wears the Inter Miami kit now. It was Nani that would see a fortunate rebound fall on his foot to put Orlando up 2-1 late in the massive stoppage time granted because of the throat injury and stretcher delay to get Colombian-born defender Andres Reyes off the pitch. Orlando would win, for just the 12th time in its last 62 matches, as Champion liked to point out. His team, according to online bios, is York City FC of the sixth tier of English football, though they are seeking promotion as of his writing.

In a sense, this MLS Florida non-spectacle reminded me of childhood forays to places like Orlando’s Gatorland a few miles from where this opening tournament game happened, or the Reptile World Serpentarium in nearby St. Cloud or even the Waltzing Waters down south in Cape Coral. There was a cheesiness to it and a buzzing background dirge cutting into the silence, a bemoaning of air conditioning units, water purifiers, the strain of overtaxed pumps and generators. The sounds of Florida in mid-summer. You could hear all that as the MLS restarted this week, and it truly was white noise that may or may not be welcomed, laughed at or completely disregarded.

In any case, seeing the word “live” in the upper right corner of my TV screen had a certain thrill to it at this particular juncture of this endless pandemic. I guess I’ll root for New York Red Bulls out of loyalty to my old, tattered MetroStars pool deck flag and my signed Rhett Harty photo in my garden shed and my wall of MetroStars press credentials issued so long ago when soccer was a joke in New York and me and my German and English pals were pissing ourselves laughing.