Delta 8, the Smooth Jazz of Cannabis

Eat a gummy, or drop a tincture, and catch a vibe. 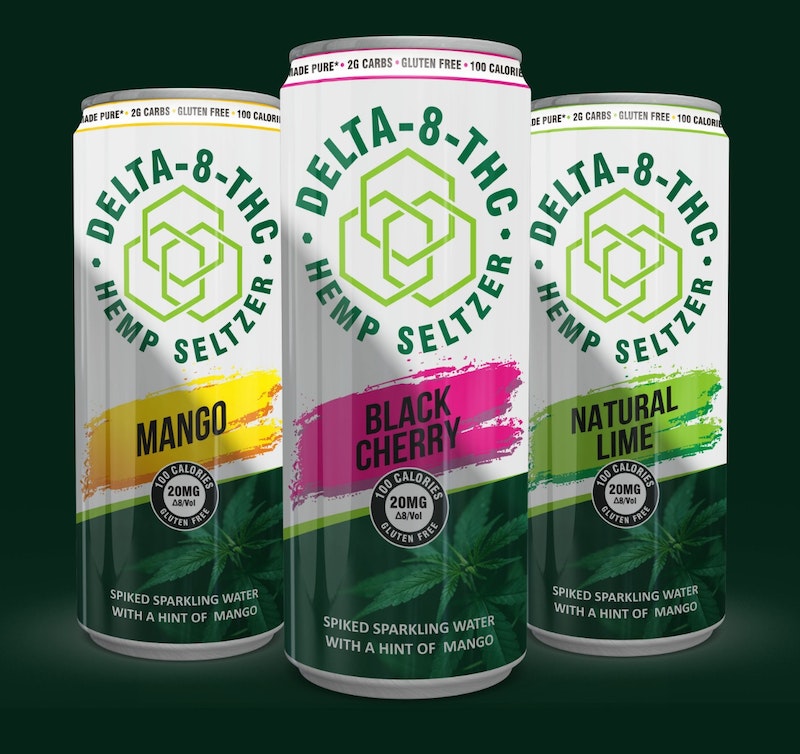 The D8 Seltzer website promises that its product will help me live a life "without limitation." That's a tall order for a canned drink, but maybe that's why it costs $25 for a four-pack. Pricey for a beverage that has no alcohol, but D8 Seltzer's not a soft drink. It contains the psychotropic substance known Delta-8-tetrahydrocannabinol (also known as Delta 8, and Delta-8-THC), which is the lesser-known cousin of the popular (and still illegal by federal law) Delta-9-THC (also just known as just "THC") that marijuana contains. Delta 8's nearly identical, chemically, to Delta 9. The reason people will pay $6 a can is that it gets them high, and reportedly without the paranoia associated with Delta 9. And it's legal, as Section 12619 of the 2018 Farm Bill removed hemp-derived cannabinoids from its Schedule I status under the Controlled Substances Act.

D8 Seltzer ads, like beer ads, won't say explicitly how its drink will make you feel. The company says it contains an "analogue" of the type of THC found in a joint that will stimulate your appetite, give you clarity of mind, and help you to love life—and only five calories too! Anyone 18 and older can purchase products containing Delta 8, which is about half as potent as Delta 9, but has more medicinal uses, including easing nausea and anxiety, slowing the growth of tumors, and protecting the brain from concussive injuries.

In addition to the drink, you can purchase Delta 8 in gummy bears, chocolate bars, vape cartridges ("carts), tinctures, and capsules. Oddly enough, one local establishment told me that it could only sell me a Delta 8 product if I was a "patient," although Delta 8 is legal here in Florida and their website says I don't need a prescription. Only Rhode Island, Arizona, Alaska, Mississippi, Delaware, and Arkansas have outlawed the substance so far, but it's certain that other states are looking into imposing such tyranny on their residents.

According to comments in a Delta 8 Reddit discussion, it appears that this high produces less anxiety and paranoia than regular THC, plus it leaves you more clear-headed. Some users described it as more of a body high than they'd get from smoking weed, which the federal government ludicrously classifies alongside heroin and LSD as dangerous substances. One user said that 40 minutes after taking a 25mg gummy bear, his body began to feel "heavy," but he still had his "faculties" about him. He compared it to feeling like he'd just come out of a spa, adding that within 90 minutes he'd fallen into a restful sleep, with none of the morning grogginess that some sleep aids can produce. The two main types of cannabis are indica (body high) and sativa (head high). The effects of Delta 8, by most accounts, more resemble the former, although you can buy Delta 8 products in both indica and sativa varieties.

One of the great shames of this nation has been continuing to make marijuana users into criminals, while drinkers can get as drunk as they wish without recriminations. Even more shameful is placing strong limits on medical marijuana, as Texas does. It's a twisted mentality to deny people with serious illnesses access to what to them is medicine just so recreational users can't get their hands on it.

Delta 8 is now taking off because the ever-vigilant federal government let its guard down and allowed a variant of marijuana—which is not legally classified as marijuana—to be legally sold. The authors of that farm bill probably had no idea about the legal loophole they were about to create. What a radical concept not to imprison or wreck the lives of people who enjoy consuming a plant. Plenty of employees of the DEA, a rogue agency wasting $2 billion in taxpayer money annually that has accomplished nothing positive since it was formed, must be upset. The more substances they control, the more power they have. Don't count the federal government out of any future intervention, however. There are many in D.C. who believes they know what's best for all Americans and get concerned when one of their instruments for control over citizens' lives is taken away.

I've heard Delta 8 described as "the soft jazz of cannabis" and "weed's little brother." Some people carry it around with them in a small vaping pipe and take a few hits when they find themselves feeling awkward in a social situation. Others like to relax on the couch and feel like they just came out of a spa. It's nothing the government should worry about.

This pandemic has caused plenty of anxiety, and I've had trouble sleeping, so I went over to the local CBD store and bought a two-pack of 25mg Delta 8 dark chocolate squares for $6.75. After about 45 minutes, I felt a subtle change. My body felt a tad lighter, not heavier like the guy in the Reddit chat said. The glow continued to amplify. It was like the exhilarated contentment I used to feel after a full day of skiing. Sitting in a Japanese bath for about a half an hour now would just about put me into relaxation territory, so I can understand the "spa" comparisons that people make.