Hen Under a Hot Tin Roof

Imprisoned in a shack on the Quibbits estate, Bennington contemplates an economic and political “close down” as the only way forward for himself—and the world. 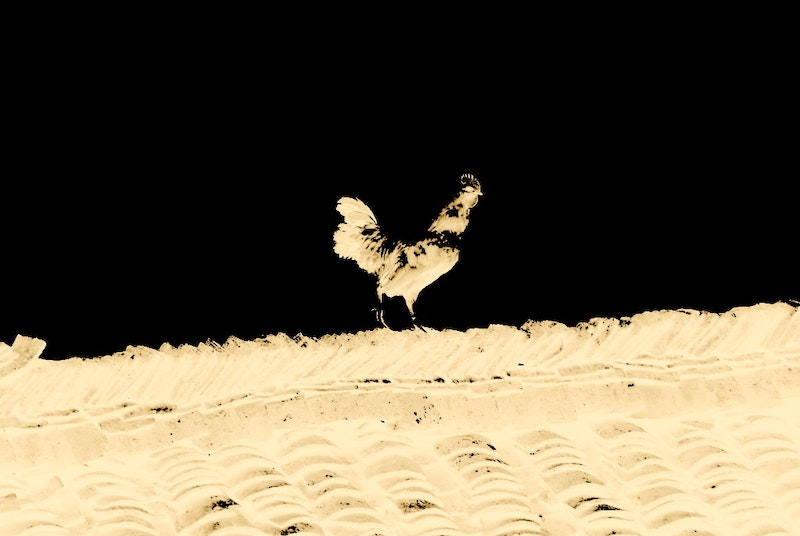 Ping…ping…ping…ping…ping… I can always hear the rain when I wake up. Nothing wakes me up like the rain. Right when I realize that the day’s already done, at two p.m., and the clouds have banished the sun for a blissful 16 hours of darkness. No moon shines above this rooster’s shack. I’m no longer in the barn, but a shack in the back, relegated to this faux-prison by my cousin and his wife Monica because of my “behavior.” They called it inappropriate. I called it speaking truth to power. Nevertheless, that power has kept me locked up in here for months with my beak figuratively sutured and shut to keep from further harming the family “image.” What are we, the Royals? Is my name Prince Bennington Philip? Is Rooster supposed to be Queen Elizabeth? Who’s Monica, Piers Morgan? British people confuse and scare me, and I know that I’m hardly in the minority on this.

So I’ve been writing like a madman in here, “real Dostoevsky hours,” but even I can see that most of what I’ve produced is shit. This is garbage, trash—who wants to read about the species-specific woes of being a “chicken” in a society run and ruled by homo sapiens? I suppose NPR’s audience may be amenable to my whines, what with their whole anti-racist programming, but I’m not sure they’ve evolved to keep up with the times. Other human beings discriminating against other human beings is nothing new, but human-on-animal violence? We’re still being falsely represented by those terrorists at PETA, who make a joke of our plight and only exist to denigrate and mock the cause of animal rights. The average American NPR listener might say, factory farming is bad, but what can I do?

None of them are willing to give up eating meat—skin, feathers, bone, viscera, excrement—but it wouldn’t take much to convince affluent liberals that eating birds is sinful. How to go about it though? Their guilt ducts are deep, but they’re clogged now with various ethnicities and pet causes of their own species. I fear that our lack of a leader, a voice, an image, is precisely what’s holding us back. There will never be an avian Jesse Jackson, a feathered George Takei, or a beaked and winged Andrea Dworkin. Rooster has done his best in this space to broadcast the news of the world back to its people through the eyes of the beings that see everything from above, but it’s still only text. People need an image, and a voice.

“Death is represented in this film by a flow of images.” In this enforced lockdown, in my shack, rain pitter-pattering against the tin roof, I watched Ici et Ailleurs on the recommendation of my cousin. “You’ll like it”—okay, thanks for the tip, but can I come outside now? I’d also like to regain my freedom of movement. But they’re still keeping, feeding, and treating me like a prisoner, communicating through breaks in the wood and shouts from the barn. Either they’re watching a lot of adult movies or they’re making a whole new family because that barn is NEVER quiet anymore.

In this film—the English is Here and Elsewhere—the filmmakers say that, in every image, there’s violence. This I know to be true. It’s also said that those without an image, or a sound, can’t fight against those with images and sound. It is not a matter of left versus right, rich versus poor, or Western or “Third World”—without an image or a voice, everything becomes “elsewhere.” We have seen so many scarring images, and they’ve created an impasse allowing nothing else to get through. We’ve seen the insides of slaughterhouses, we’ve seen Auschwitz, we’ve seen Abu Ghraib, we’ve seen Daniel Pearl, we’ve seen George Floyd, and on and on and on. This wild overstimulation creates a stasis and an inertia that appears impossible to break.

The only solution is to, as Pasolini said in the final interview of his life, “close down.” We have to start a new world from new ideas and with an eye toward the future. The past can only be regarded as pavement on which to plant the foundations of this new utopia. “Imagine no possessions,” sure, but also imagine the freedom of love. Imagine a world whose only constraint is linear time. There would be no more violence, no more products. The cynical interviewer asked Pasolini what he would be left with after this “close down” he proposed, given that he was a filmmaker, author, and artist with commercial works. “I’ll be left with everything.” He never got to find out whether he was an idiot or a genius in this regard.

The gas is leaking, I’m being suffocated. I’m not sure how much longer I can write in here, with no light except what leaks in through the slats. If I’m ever going to get out, I’ve got to break through the roof, and if it’s sheet metal, if it’s tin, I’ll be able to get out by chucking this here Chromebook into the roof and making one last push to fly away. I’ll do it as the mother lifts a car above her crying baby. But first I must complete, save, and email this story to my publisher. I’m attempting my own “close down” now. The world will soon know if Bennington Quibbits is an idiot or a genius.