The Potato Heads Have Always Been Gender-Fluid

Mr. and Mrs. Potato Head, more than any other toy, have always been directly concerned with the deconstruction of gender codes and signs. 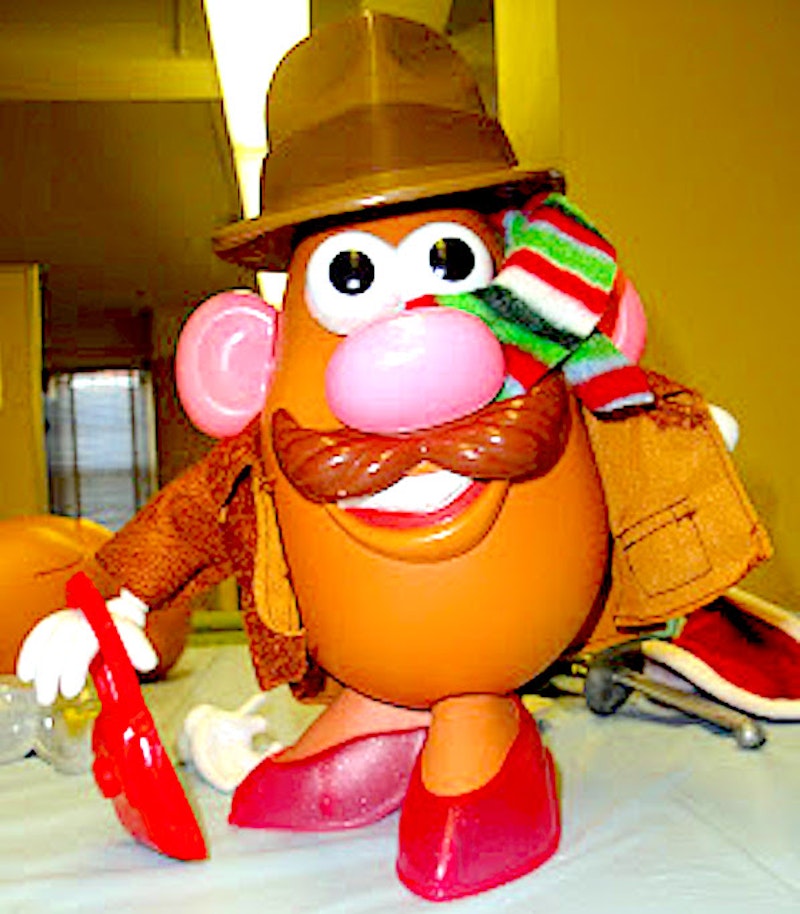 “Mr. Potato Head” was never a man—he was always a radical experiment in gender semiotics. Consider the functions of a Mr. or Mrs. Potato Head: one can move around various accessories and body parts in a humorous, nonsensical pattern, hence the fun, hence the toy. It follows that one could easily take a “Mr. Potato Head”—hat, mustache, glasses—and jumble the pieces until “he” no longer resembles a mid-20th century American working man. People have put Mr. Potato Head in drag for years; this isn’t news.

Hasbro has produced Potato Head products since 1952, and they’ve been an enormous success: besides selling millions of toys, they’ve both appeared in the Toy Story films, some of the most widely seen cultural products of the last 25 years. Everyone knows Mr. and Mrs. Potato Head. But let’s unpack the concept of the product: again, Mr. Potato Head is only identified by his mustache and hat. You can’t tell me pink boots automatically code a potato as female. Show me Mr. Potato Head wearing pink boots instead of his usual blues and I’ll tell you that that man—I mean potato—has a man’s penis.

See? This is what I mean. The mustache and glasses are as important to “Mr.” Potato Head’s identity as a hypothetical plastic phallus would be if such an absurd accessory were included with a toy meant for children (though, with so much focus on Potato Head in the media lately, and the abundance of adult concern over the “gender change,” one wonders how many adult human men are at home “playing with their products”). Similarly, Mrs. Potato Head is coded as female only through her hair and handbag. This is already a very gender-fluid family. Why all the tsuris?

Perhaps that was Hasbro’s intention, to emphasize a genderqueer aspect to the character of Potato Head that’s been inherent and obvious since the mid-1950s but which was traditionally overlooked or ignored entirely: “Hasbro clarified that while the brand is changing, the actual Mr. and Mrs. Potato Head characters will still live on and be sold in stores. In a picture posted on Twitter, the ‘Mr.’ and ‘Mrs.’ names are less prominently displayed at the bottom of the box, instead of the top… ‘They are looking to broaden the franchise,’ said Robert Passikoff, founder of marketing consultancy Brand Keys. ‘You take the focus of what is essentially one character and now allow it to be a platform for many characters.’”

The market understands that gender sells, but who’s buying? Who cares—I just think that Hasbro should include many more accessories and parts than are currently on offer, and I’m not just talking about male/female codes like dresses or pants. What if Potato Head has a drug problem? What if they’re shooting up heroin? What would a spoon mean to a Potato Head? What about a Mr. Potato Head? Same as Mrs.? Does it matter? Someone’s getting strung out either way. Or they’re eating Cheerios. These are all signs, and that’s all they are.

Mr. Potato Head is not being castrated or “erased” because he doesn’t have an adult man’s penis. He doesn’t even have a plastic replacement. Mr. Potato Head is as much of a man as Julia Sweeney’s Pat, and Mrs. Potato Head may as well not exist for as little as we know about her. How about that for some gender reconciliation? I want the origin story of Mrs. Potato Head, or a mid-life crisis story like Jackie Brown that could plausibly appeal to the adult baby “girlboss” set and could actually be a maximalist masterpiece like The Emoji Movie.

I like these moves. I think they’re interesting. It’s fascinating to watch major corporations reckon with the fury and rigidity of activists and customers growing ever younger and more abundant. They can’t help tripping over themselves, and it’d be very funny if the pendulum swung back in a year or two, and we actually get an anatomically correct Mr. and Mrs. Potato Head, just for clarity and posterity. How well is Mr. Potato Head hung? We don’t know, thank god. Yet.