Lord I Could Eat at the Murder Restaurant

The 1990s were comfortable and free—so much so that I (a bird) went into a Manhattan McDonald’s for lunch one clear spring day. 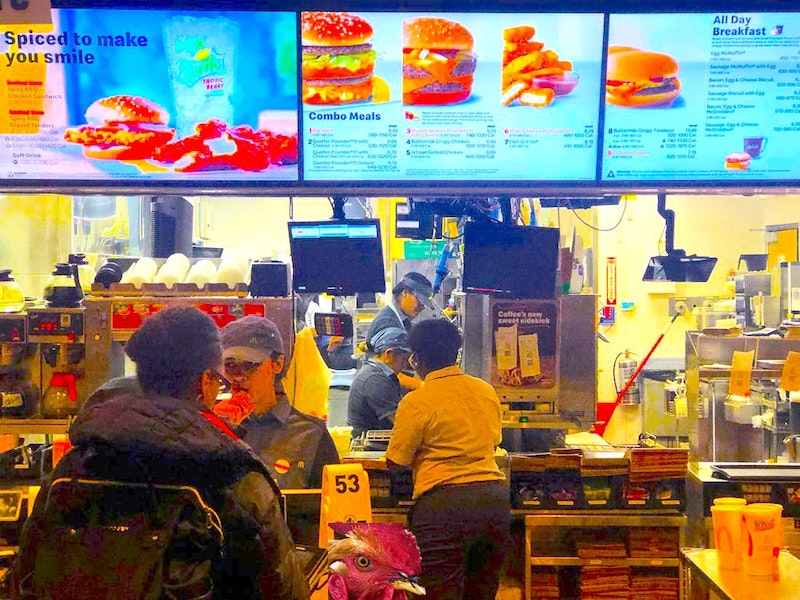 The author at a McDonald's sometime in the 2010s—he is, at times, an undisciplined individual.

Deeper than my well of understanding, or that of my grandfathers, is the pain inflicted every day upon the winged races of the world. Birds are the prime targets, as I remind everyone that asks (few do). I can understand war—la guerre—as it was fought before the Industrial Revolution. Combine the military technology of the early-1800s with the medical advances of today, and, if you ask me, war would be a lot more humane. You guys might actually get to have more of them, if that’s even possible. I kid. I’m not a partisan. I just hate McDonald’s so much it’s unreal. It’ the Great Satan, and today I’m going to tell you a story of the one time I went there—not as an investigative journalist, not as a government agent, not as a saboteur, not as an activist. I just went in there to see if I could eat.

Lord, I could eat.

I knew this day would come. It was the 1990s in Manhattan—the greatest time and place to be alive—and I was feeling great. It was a clear spring day in 1996, and I sauntered over from my rent-controlled loft attic situation to the Virgin Megastore in Union Square. I bought Mellon Collie and the Infinite Sadness by The Smashing Pumpkins on cassette. The album was so long it came on two tapes, and the cover box was as thick as the mermaid on the cover, touching herself while flying inside of a star (oh behave!). No but really I will, behave that is, because I know my wife reads my writing. At least I hope she does.

I bought some other things at Virgin Megastore: On the Corner by Miles Davis (incredible), Nashville Skyline by Bob Dylan (decent), Post by Björk (eh), It’s a Shame About Ray by The Lemonheads (very good), Liquid Swords by GZA (also very good), and A.M. by Wilco (awful). I was a fan of Billy Corgan’s band because they gave us a place to stay in Ghent in 1992. He was awfully nice to Monica, maybe too nice now that I think about it, but I was happy enough to see their double album displayed out front, knowing this generous man who unsuccessfully hit on my wife and gave us a place to stay in Europe had found some success in his life. Maybe he could finally go to an exorcist and get rid of those demons inside of him. Dude was tortured for real…

Happiness is not always fun. Neither is death. I had had nothing to eat that morning and as all birds know, New York City is not a fun place to be if you’re winged. First of all, consider Chinatown. They hang rabbits upside down in their windows—skinned. What kind of sick fuck even dreams up something that perverse? Then there’re the street dogs, and I don’t mean the pets of the rich (although poodles can suck me on soft, as always). There were a couple of hot dog stands outside of the Virgin Megastore, and I had to hide under my shopping disguise more than usual to avoid being snapped up by the immigrant murder salesman (I always wear a brown sweater vest and a brown bowler cap with fake glasses and mustache whenever I go out into human consumerist spaces).

So I had presents for Monica and myself, and a lot of time left in the day. The daylight stresses me out. I can’t get anything done during “banker’s hours”—it hurts too much to remember that I’m alive. In a fugue state, I started walking not towards the Toys ‘R’ Us (to get a video game for my then-ailing Uncle Slippy—he loved GoldenEye), but to a set of what you demons call the “Golden Arches.” I was attracted by the smell—potatoes, salt, grease—that tricks so many of you into ingesting its violence. I admit it’s a drug, and they have to be putting something into the air ducts.

I don’t remember walking in but I remember standing in line. This was a “bad” McDonald’s (as if there could be a “good” fast food restaurant—have you ever heard of a “good” concentration camp?), and there were used condoms on the ground, people sleeping underneath the tables, people shooting up under the tables, heroin paraphernalia scattered around the first floor. Remember this was New York, in the 1990s, so everything was more. This “bad” McDonald’s had two floors, and I didn’t dare go up to the second to find out if they had expanded into the opium den business. There was no line on the first floor, just junkies milling about nodding off and a couple of businessmen and employees of nearby stores eating with great concentration, just trying to get through these 45 minutes they have “to themselves.”

I do remember going up to order. “One fry.” The cashier asked me to repeat my self. “One fry.” She asked again if I could “please” repeat myself. “One fry, please.” I wasn’t going to give this death factory any more money than the minimum. She told me they “couldn’t do that.” I asked why. She said they only sold smalls, mediums, and larges. That’s when I stopped listening to the words coming out of her mouth and started listening to the song singing from her heart: and it was a song of hate. “You don’t deserve one fry, you should have to pay for one and one thousand fries, you stupid fucking bird. Get in the back so we can use you.” I heard all of this emanating from this woman’s heart.

Maybe she’s a Congresswoman today. Maybe she’s a heroin addict. Maybe she’s dead. These are all possibilities. Life is long and mysterious—for some. For others, it’s rather brief and unspectacular, even excruciatingly painful, with no reprieve. I’ve had better luck than that, and so has most of the Quibbits extended family. God looks after us birds. That’s probably why he makes anyone who plays Big Bird impotent. Very wise, although redundant if you ask me. She may be famous today, but on this clear spring day, this woman was just trying to take my order at McDonald’s. And I’ll admit it: I was rude to her. I didn’t know how to be a “good leftist.” I’m trying, because I want to go on Sam Seder’s show. I like his backdrops and his YouTube clips. I don’t know much about politics but I know more about farming than all of those mealy-mouthed Brooklynites.

I didn’t hit her, I didn’t scratch her, I didn’t yell at her, I didn’t turn into a whirling ball of blur and spur claw her halfway to Sunday—all I did was put up my wing and say, “No thank you, bitch”—and walk out. She probably wasn’t a bitch. Like the dad in Donnie Darko said to his wife after their son acted up, “You’re not a bitch. You’re bitchin’, but you’re not a bitch.” I turned around so fast because I was scared, I was nervous, I was a coward, and I can’t tell you what that woman’s face looked like any better than I could tell you what a McChicken or a McDouble tastes like—I’m not that much of a masochist. The junkies parted like the Red Sea when I left the McDonald’s and headed south down Broadway.

I never got my “one fry.” Of course I had had French fries, but never from McDonald’s. Ultimately, it worked out, because only a few years later, I read a story in the New York Post about a Muslim man suing McDonald’s for frying its fries in animal grease, thus violating his religion. As if this corporation needed any more evidence that their very existence was an affront against God—yet they continued. The fries have been cooked in vegetable oil ever since, even if that one Muslim man is never going to receive his eternal reward for unknowingly consuming animal byproducts.

“So it goes”—I think if Kurt Vonnegut had lived longer he would’ve written copy for McDonald’s. Once you’ve lived as long as I have, you realize life is not a straight line but a series of figure-eights, and through the centuries I’ve found myself more concerned with morality, uprightness and courtesy than in the past or recent future. I couldn’t be bothered with Victorian morality, but I was aghast by everything that happened in the 1960s (besides the drugs). I don’t think wives should be “swapped,” and I certainly don’t think anyone should throw their car keys into a bowl. That’s just unsanitary.

But that was the 1970s—I think it might be high time to bring back transgressive behaviors. Everything was allowed in the 1990s and it felt okay and right to try new things—like eating at the murder factory known as McDonald’s. But even in as free and comfortable a society as that, when face to face with death, and the devil incarnate as represented by minimum wage cashiers, one’s ideals do turn from stone to slop fairly quickly. I got honey buns from a bodega and brought them home to Monica that night. We ate the buns, watched Larry King Live!, and went to bed at 11. Things were better then.