No More Fried Dog on My Menu

PETA, as always, can kiss my ass. 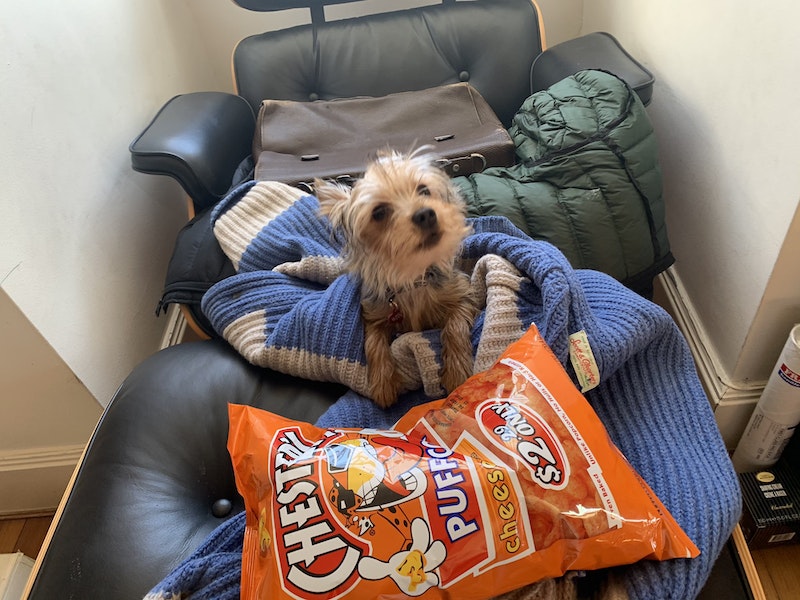 At some point in the late-1980s one of my brothers, after receiving lousy cholesterol numbers, decided to go full bore on a new dietary regimen, and for a month ate the most boring foods you can imagine, which was difficult for him, since it meant putting the foie gras and stinky French and Italian cheeses to the side. He remained in good spirits, however, although became peckish around dinnertime. Near the end of his experiment, he said, with a grin, “I’ve decided to treat myself. I’m going to have a baked yam for dessert tonight!” That got a good chuckle from a few of us, which was about the best he could ask for, seeing how the ghost of Euell Gibbons was hovering over him at the kitchen table, nodding approval at the repast of berries, various kinds of lettuce (no dressing), plain almonds and radishes.

Anyway, his month in culinary prison was a success, as the doctor reported improvement, and he was free to get the feedbag back on. Not excessive, but grilled fish, caviar on occasion, oysters and clams when in season and even an occasional portion of terrapin soup, liver or fried calamari.

At the time, his monk-like diet was a source of private amusement, but as a sexagenarian now, I’ve consisted on a plain bill of fare at suppertime, not because of high blood pressure or bad cholesterol—in the genetic pool of our fairly large family, I got lucky in that department… at least so far—but rather a rebellious gut, probably ravaged from a lifetime of eating very spicy food, from Indian to Thai to Szechuan (with extra chili oil) to Mexican, not to mention dousing most foods with Tabasco. It was just 10 years ago that my wife, kids and I would give the Maryland State Fair a two-hour whirl annually, and the best part was coming back with a slew of pulled pork sandwiches that went down easy; and I used to eat 25 chicken wings, dressed up “Chernobyl” style, and thought nothing of it. Today, if I pulled same stunt, my mood would be exceedingly cranky the next day.

But one can try to make do. Now, at dinnertime, I have a crisp and sour apple, and then chicken or minestrone soups, salads or simple pasta dishes prepared by my indulgent wife, or turkey or tuna sandwiches, and, on most Saturdays, I go wild with wraps from Bella Roma’s. At the beginning of the day, I think about getting Chinese (even though the take-out in Baltimore is just one rung above disgusting) for the spare ribs and beef with broccoli, but always go yellow when it’s time to pull the trigger. My sole weakness—it’s incredible, at least to me, how vices, at least for those who don’t want to feel like shit, become so tame as you age—is an assortment of salty snacks to accompany the meal. Nothing too glutinous, I’m not a Big Gulp bruiser, and pretty thin, but an assortment of chips, pretzels and Doritos are on hand.

(I first had snacks as an accompaniment for lunch at college in 1973, when my roommate habitually ordered Fritos to go with his burger. When I asked why, he merely said, “For a taste differential.” That’s not to say I was deprived as a kid: on Long Island, Wise potato chips—the old recipe, with spuds slightly burnt, couldn’t be beat—Cheese Doodles, Dipsy Doodles and pretzel sticks were in our cupboard. Now I favor Utz chips, which slaughter any of the organic shit on offer at Whole Foods.)

My current snack of choice is Chester’s Puffcorn (news to me that Chester’s is a division of FritoLay; I assumed it was an independent company that started in some backwater Pennsylvania town around 1920)—which I’d never heard of until about a year ago—a sort of popcorn, but without those nettlesome kernels. Cheese-flavored, the Puffcorn is soft (not like buttah, but maybe a red or orange Jugyfruit right off the assembly line) and even acceptable when you’re in midst of constant dental work—an ongoing story for me now; after almost a lifetime of well-behaving teeth, they’re now worn out, and it’s a parade of root canals, crowns, and even a “flipper” that I’m currently, with protest, wearing to cover the hole created by a pulled dead tooth—and they go well with Andy Capp’s cheese fries.

(By the way, even though I had my share of tubs of buttered popcorn at the movies as a kid, I turned against it when I was a vendor at Baltimore’s Memorial Stadium in the mid-1970s and saw the room that stored hundreds of immense bags of stale popcorn, hawked as “hot and fresh” to unsuspecting spectators. That popcorn was awful shit, but maybe the paper Orioles megaphone was draw.)

Long story long: I was bummed that a local supermarket in my neighborhood, Eddie’s on St. Paul St., a fixture on the 3100 block since 1962, shuttered on New Year’s Eve. According to local news reports, it wasn’t the pandemic that did the store in, but rather aging owners who were ready to retire. As a college student and young adult, I shopped there regularly, and its nearby proximity to Eddie’s Liquors and the Homewood Deli was very handy. In my second stint living in Baltimore, I didn’t go to Eddie’s much, except… they were one of the few stores that carried Chester’s Puffcorn and Andy Capp cheese fries. There is another Eddie’s downtown that has the wares, but it’s a bit out of the way; the Safeway near my office doesn’t touch Mr. Capp but if I’m lucky will have a few bags of Chester’s. But it’s hit-or-miss.

I suppose I’m making a big deal out of not too much, but it beats joining the millions still rejoicing about Rush Limbaugh’s death or foolishly—almost four years before next presidential election—speculating on 2024 politics. I’ve no idea and I’m honest enough to admit it. The real question today is how long before Joe Biden—it’s really something to watch his half-incoherent minute-long statements on YouTube, or cable, if you’re still in that gulch—is replaced by Kamala Harris. (Oh, on Limbaugh: I hadn’t listened to him since the Clinton presidency, he was too full of himself and pushed loony lines of political thought, and there were way too many commercials. But from August 1994 to the midterm elections I tuned in daily. A younger and more together Newt Gingrich was a frequent phone-in guest, and though hardly any other news outlet was paying attention—no Fox News yet, but Deborah Orin in the New York Post was on top of it—the coming GOP “tsunami” was apparent to anyone who listened to Limbaugh, although the decimation was larger than expected. Ironically, one of his biggest detractors, Howard Stern, in pre-Sirius days, was an enormous factor in George Pataki’s upset win over Mario Cuomo for New York governor that year.)

Above is a picture of the family puppy, Billy, a five-pound Yorkie who barks like a German Shepherd, and happily for him, there’s no dog-to-the-slaughter timetable.