Empathy is lost on one late night diner. 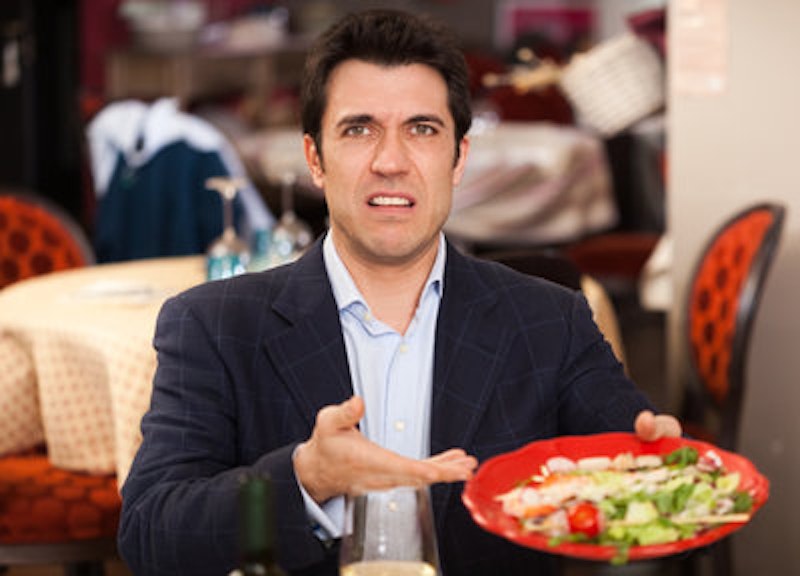 It’s late—around 9:45—and I’m hankering for a salad. Sweetgreen’s open till 10, so I book it out of my apartment and jog to DuPont Circle, worried that I’m gonna be that one annoying customer who comes in at closing and demands service. I am that one—one of many. There are about half a dozen people in line, and they all look as guilty as me, eyes darting around sympathetically at the handful of Sweetgreen employees doing double duty: attending to us and preparing for clean up. Except for one lady—early 30s, short, professional-looking—who’s taking stealth photos of the whole scene. She’s probably a Yelp! veteran.

Our amateur documentarian shakes her head and frowns while tapping away at her iPhone: she’s snapping pictures of the guy mopping up, the sealed neoprene spinach containers balanced on the sink, the avocado shells strewn across the entrance to the kitchen (an employees only area). She’s muttering “What’s taking so long?” in a stage whisper, hoping a fellow customer will strike up a conversation and join her side. Some people turn away, some retreat to their phones. I avoid eye contact—I want no part of this war against Sweetgreen. She wants blood, though. That much is clear. She’ll fight this war solo if that’s what it takes.

The manager walks past us. She strikes. “This is ridiculous,” she says. “You guys need to get your act together.”

And then the monologue starts: “You have customers here. You can’t start cleaning up until your customers have left, that’s just basic etiquette. It’s gross. I don’t want to see someone mopping while you prepare my salad. That spinach over there, on the sink? Why’s that not refrigerated? You need to throw that all away. This place is a mess, it’s disgusting. I’ve been a waitress before, so I know the rules. And you are not following them. It is 9:56, you don’t close until 10. That means you cannot clean up until 10. This is ridiculous, it’s ridiculous!”

Then stop eating here, lady. Your past history as a waitress is irrelevant since you clearly can’t empathize with group of poorly-paid, hardworking “Sweetgreen teammates.” Why do you demand more from these people? Just wait for your food politely and be grateful that they served you in the first place.

The manager handled it well. He apologized and said that he understood her frustration. She wasn’t mollified—I bet her Yelp! review was scathing. I considered speaking out—telling her to lighten up, to have some empathy—but that wouldn’t have solved anything. It probably would have caused more trouble for the manager, actually.

But still, I wish she hadn’t walked away with a sense of accomplishment. People in the service industry work hard. They don’t need any extra grief. If you want better service, tip instead of complaining. And don’t be upset if the restaurant aesthetics aren’t optimal while someone prepares your kale Caesar salad.