Why I Stopped Tossing Salad

Once you go crudité, you don’t go back. 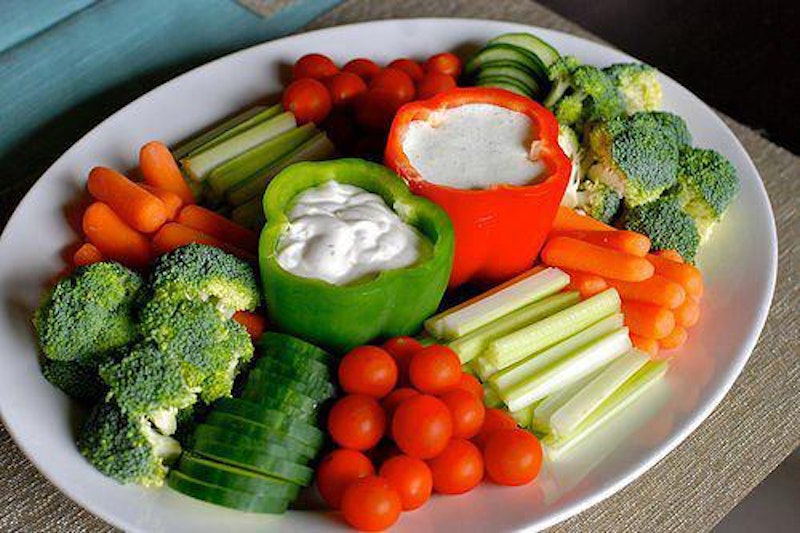 My orientation altered the week that Cocoa poured love and garlic into his homemade hummus. The day after first enjoying his dip, I found the chilled leftovers still in the fridge. On any other day, under ordinary circumstances, I’d have gone through the motions of tossing a salad, dreading the bushy kale bowl’s sogginess and penchant for drenching my beard.

I worked from home and didn’t like eating out. My lunches, though healthy, were loveless affairs. I’d strip kale and chard leaves from their stalks, liberate a bumpy head of broccoli and shave its fat stump for additional fiber. I’d make sure that green mess got a bath in the colander. Quick to clean a carrot, I’d lay it on the cutting board, hack it up and drop the orange coins in the mixing bowl. It didn’t matter how I dispensed with the onion. Mindlessly deciding on diced, minced, or rings, I could never develop a preference. The necessity was that of dousing the raw onion with olive oil and vinegar to kill the sting to my nose, mouth and tongue. Finally, I’d add salt, pepper, parsley, honey, cayenne, sriracha, soy sauce, and/or blue cheese, close the lid on the bowl and shake it vigorously. As you can imagine, the majority of my salads were unfortunate cesspools. Such goopy, rain-forest goody bags assaulted my tongue and, because they had to be chewed at length like cud, challenged my gag reflex.

It was clear I needed to dump the salads, which were obviously too much for me. I was in over my head. I’d have to switch my methods of engagement and consumption in order to get any pleasure from eating raw vegetables and salad greens. My lust for a second taste of Cocoa’s lemony hummus motivated me to take risks, to redefine a relationship with edible plant matter.

“A dollop of that hummus will be the centerpiece,” I decided, getting down a plate from the cupboard. I went to the fridge for the kale bag and ripped just enough leafage to create a nest for the hummus blob on the plate. I sculpted the kale and hummus into what looked like a head of cabbage and carefully christened it with a little olive oil and paprika. Next on the cutting board, I quartered a tomato before exacting it into eight pretty wedges, aligned along the top right quarter of the plate. It was then that Cocoa walked into the kitchen and commented, “Oooh, you’re going about it all 1950s.”

“I mean you’re fixing one of those fancy platters of crudités.”

My excitement and drive instantly grew in response. I imagined first I was a pretentious French chef set on impressing palace guests with the pyrotechnics of nude veggie arrangement. Then, thinking about what Cocoa said about the 50s, I became an American mom, post-World War II, restoring visual order to harvests and reviving lost appetites with a little art and a healing touch. I chopped both ends off of a handful of green beans, halved them, and built a beaver’s dam at the bottom of the plate. The west top quarter displayed my signature carrot coins. This was my inaugural stab at crudités. Cocoa helped me take a picture of it for social media.

Boy, did I like what I sat down to ingest! It was healthy and mess-free. The vegetable piles removed the need for a fork. They were the tasty utensils with which to enjoy the feast. More than once I was using the green beans as chopsticks. I laughed. I didn’t know it at the time, but when you make crudités you develop an intimate relationship with each vegetable. I find that carrots are sweeter when they stand alone in your mouth. They afford a lovely crunch. How fun it is to suck a tomato dry, swallowing the seed gunk that rides down the back of your throat. I didn’t find the kale troublesome to chew because there wasn’t much of it on the plate. Besides, the chickpea goo buried the little leaves and softened their abrasive texture.

In the weeks following this first experiment, I’ve sculpted a dozen admirable examples of crudités, each one a little more elaborate. I’m still finding my footing and unique tastes, but I haven’t had a single craving for a tossed salad.