Should I Kill My Collard Greens? 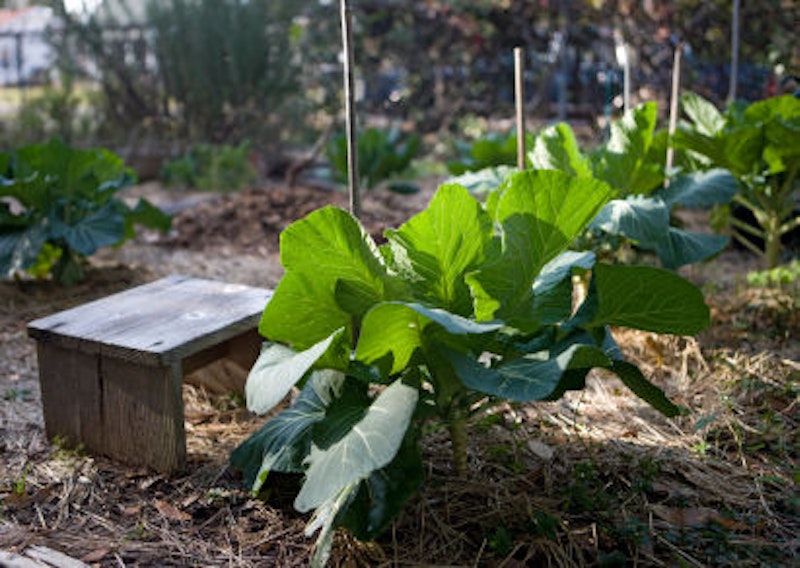 Somehow I doubt this is covered in the guidebooks or online. When I started a backyard vegetable plot, I expected moral dilemmas, but not this one: my collard greens refuse to die.

A year ago I planted kale, chard, lettuce and collards in several small patches around my property. A couple of these spots were in the front yard, defying suburban norms. For reasons unclear to me, rabbits and occasional deer never touched any of this bounty. But there was no shortage of enemies: slugs, caterpillars, and clouds of tiny white-winged bugs that can turn a thick healthy leaf into lace in a day or two. I didn’t spray poisons on my garden for two reasons: I planned to eat the produce, and lacked the dedication it’d take to research insecticides, buy a sprayer, mix up the potions, and then drive back to the hardware store for a protective breather. In past years I did set out jar lids full of beer to give the slugs something to wash down my buttercrunch lettuce with. I justified that decision on the grounds that the beer, left over from a poker game, was not that great.

Rather than chemical warfare, I based my defensive strategy on out-producing my foes. Hence the multiple plots. And it worked. Although hard-working insects ravaged night and day, they couldn’t keep up with the supply. Whenever I wanted collards or kale I could always snip a bucketful of untouched leaves. And the plants grew undaunted, pumping out new leaves as fast as previous ones got consumed. I became the collard and kale king of the neighborhood, ensuring the loyalty of my followers by dispensing bags of green loot.

Collard plants grow from the top. As lower leaves vanish or perish, fresh ones emerge where they have the best shot at the sunlight. Over the course of the summer and fall, my collards grew taller. They crowded out the chard and sprawled beyond their proper borders. Their stalks thickened and twisted and spiraled onto the grass, daring the lawnmower to stop them. At grocery stores and farmers' markets, people paid I don’t know how many dollars per bunch.

When winter arrived, with multiple heavy snows and long weeks of deep freeze, my collards became even more a source of power and pride. They never gave up. Their young leaves poked through the snow, defiant. On a couple of occasions between snowstorms, I helped myself to a goodly harvest.

Now it’s spring and even more of the collards have come back to life. Tangles of brown ropey stalks cover the patches of ground where I first planted tiny seeds. Verdant vertical shafts, resplendent with pristine leaves, form a wider periphery, extending further and further from their roots. The collards give every sign of taking over more territory. So, that’s the dilemma.

Perhaps I lack imagination, but this appears to be a binary choice. Either I allow the collards to run rampant, or I take a steel spade and chop the entire community from the soil. Am I capable of that level of violence? There is a greater good argument. The sacrifice of the collards would clear the way for zucchini, for this year’s chard. There’s also the matter of inevitability. The collard plants are now going to seed. By sparing them in April, I could end up with the shame of useless weed patches by mid-summer. But to sever from life the collards that provide such a wealth of nourishment and inspiration? Cold.