Buttered Toast As a Necessity for Life

I’m a bird of simple pleasures, and toast just isn’t what it used to be. 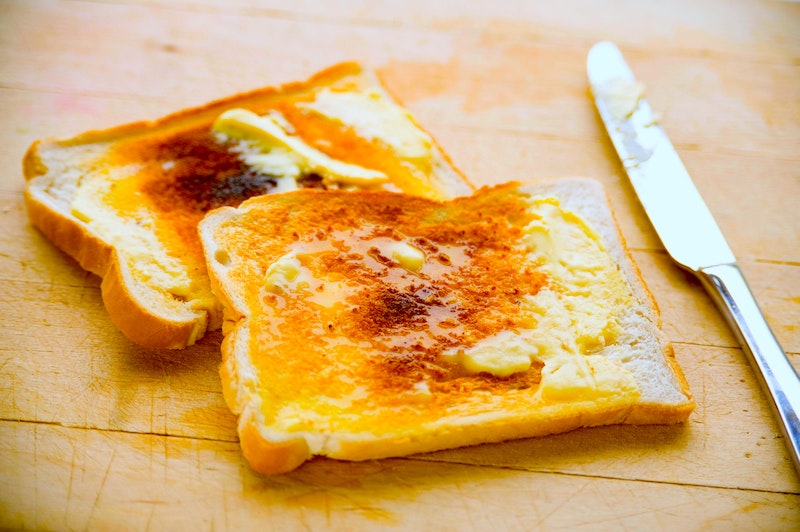 Ever since the war started, they’ve stopped putting butter on toast. What happened to that? It used to be you could get a Full English at any diner near or in Marshfield; now they’re all Dunkin’ Donuts, Starbucks, and 7/11’s. What happened? We used to be a country. We used to have the church—not that I ever went, but we used to have it, and it mattered. It was important. Another thing I miss about breakfast is complimentary grapefruit juice and coffee. What happened to that? Has the grapefruit gone missing in the Global South? Are cocoa beans hard to come by now? I understand that inflation is occurring, but I’m not sure exactly how.

That’s not entirely true: I know because my latest advance is a quarter of what the last one was. Admittedly, it’s a shorter book, with zero “trauma” or political relevance; I just wanted to write a story about goats in the 1800s. Problem? (It’s not a Western, by the way.) Not only that, sales have been slipping on my one hit, Always a Stone, still in its third edition after a smash success in hardcover and paperback. I’m beginning to think that David Foster Wallace and F. Scott Fitzgerald had the right idea in “taking a break”—i.e. trying extremely fucking hard to follow up your career making success with an even better achievement without ever actually publishing anything new for a long time—because even if they didn’t live to see their legacies blossom and new fans every generation, their books are still read. And more importantly, they sell.

Maybe it’s time for another “big book,” one laden with great meaning and grand discoveries of the soul. Perhaps I’ll finally show humankind how far away it has strayed from the principles of Christ. Perhaps I’ll just end up on some literary critic wank’s list of the Top 10 best or worst books of the year, in a half-inch column in a glossy magazine no one will read, doomed to sit in a dentist’s office, untouched and unobserved until it’s thrown away and brought back into oblivion. Always a Stone is gaining the kind of reputation Jonathan Franzen’s Freedom has: a lesser novel following up a masterpiece most people have forgotten in the first place. But I don’t even have that first masterpiece. My masterpiece is my life, and I live it every day. Try getting that published.

“Roo? There’s no electricity in the kitchen. I think we need to sue the utility company again.” I tell Monica that she doesn’t need to sue anyone, I’ll just call Ben (Affleck), our gas and electric provider. Just like Leonardo DiCaprio owns dozens of apartment buildings in West Hollywood, Ben has a financial interest and a stake in his home state. We like Ben: we had him and Matt over for dinner just before Good Will Hunting wrapped in Boston. Elliott Smith was supposed to come, but they told us that he had had too much to drink the night before and tried to jump off a cliff. Wait, no, he did jump off a cliff, he was trying to kill himself, which he didn’t, I guess. Anyway, they were very nice but we’ve never seen them together again, only separately. Monica doesn’t like it when Ben smokes menthols in the house but I join in, because kindness goes both ways: I got him to give us a 50 percent discount until he got back together with the love of his life, Jennifer Lopez.

So I thought we were set for cheap utilities forever, but lo and behold, love wins, and now we can’t afford to keep the lights on. “Are you coming in for breakfast? Bennington’s finally awake.” I tell her I have too much writing to do, but just before she leaves in a huff, I shout back, “Is there toast?”

Finally time for me to eat some breakfast.