When the government gets inside your cocktail glass. 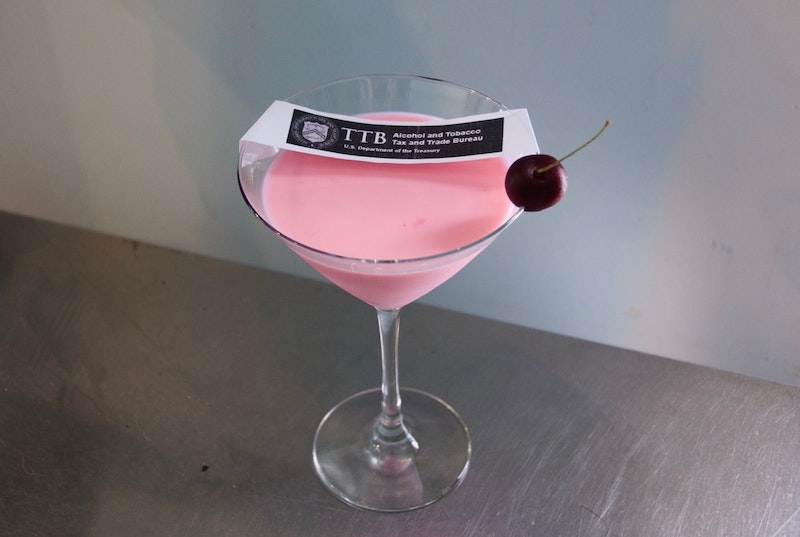 Next time you plunk down on a bar stool and order up a creamy, sweet pink squirrel to take the edge off, make sure the bartender uses crème de almond, crème de cacao, and cream. If not, look them in the eye and inform them that they might have to answer to the U.S. government.

It may surprise you to learn that the Feds define what constitutes a pink squirrel—along with a wallbanger, grasshopper, sloe gin fizz, mai tai and some 25 other cocktails. You’ll fine these mixed drink definitions in Chapter 4 of the Beverage Alcohol Manual: A Practical Guide (distilled spirits edition) put out by the Alcohol and Tobacco Tax and Trade Bureau, TTB for short (or “The Revenuers” in the parlance of bootleggers and moonshiners). The TTB was spun out of the Bureau of Alcohol, Tobacco and Fireams in 2003, which itself had actually added “and Explosives” to its name in 2002 but everyone still calls it the ATF.

Over the years I’ve had cause to dip into TTB’s thicket of liquor literature, discovering a mix of helpfulness and humor. (Just the mental picture alone: a group of buttoned-downs sitting around a table in a D.C. meeting room, “Okay, next on the agenda, the pink squirrel…”) The manual also aids with my ribbing of top-shelf vodka drinkers pontificating about their brand’s superior “flavor” while justifying the swollen price tags. Here’s how Uncle Sam defines vodka: Neutral spirits distilled or treated after distillation with charcoal or other materials so as to be without distinctive character, aroma, taste or color [italics mine].

While vodka—in all its indistinctive glory—is pretty much dispatched with in a sentence, TTB takes four pages to define more than 40 types of whiskey, domestic and imported. There’s a lot of good information here. I don’t know how many times I’ve been talking whiskey at a party and someone will insist that bourbon has to be made in Bourbon County, Kentucky to be labeled as such. Truth is, until a small craft distillery opened there four years ago, no whiskey has been made in Bourbon County since Woodrow Wilson was in the White House. No, here’s what a bottle labeled bourbon needs to be: Whiskey produced in the U.S. at not exceeding 80 percent alcohol by volume (160 proof) from a fermented mash of not less than 51 percent corn and stored at not more than 62.5 percent alcohol by volume (125 proof) in charred new oak containers.

Rye whiskey is exactly the same except you swap out corn for rye.

While that seems pretty exacting, some craft distillers are stretching the word “stored.” Until you get to the classification “straight whiskey,” which mandates at least two years in wood, no storage length is specified. Some distillers are taking spirit straight off the still, pouring it into an oak container, and then pouring straight out again—reborn as whiskey. I’ve even heard of one maker who runs new spirit through an oak pipe where it comes out “whiskey” at the far end.

Beer gets its own TTB Beverage Alcohol Manual though it’s considerably shorter. The bureaucrats really drop the ball here, refusing to wade into the increasingly complex world of beer—with its Barrel-aged New England Red Double IPAs and the like. Here’s how they “define” an IPA: Malt beverage containing 0.5 percent or more alcohol by volume. That’s it. This Every Beer descriptor is used repeatedly, rendering the manual of little help when confronting the increasingly convoluted taproom chalkboard. Not that I pine for my early-1980s college days when there were only two types of beer: 1) those I could afford (Wiedemann’s, Schaefer’s, Schmidt’s, and a few other regrettable brands); and 2) everything else.

Wine doesn’t appear to get is own manual, though its regulations and stipulations are plentiful. I was hoping the government could help me figure one thing out: what is/was cold duck? During my 1970s childhood, bottles of this stuff would show up in the fridge portending that another raucous, smoke-filled party was headed to the club basement. But no official duck answers could be found. Google says it’s a blended wine developed in Detroit (of all places) by marrying a cheap sparkling white with a cheap, sweet red; it’s based loosely based on a Bavarian tradition, with the waterfowl name the result of a botched German translation.

I’m sure it’s way too sugary for my tastes. Ditto the pink squirrel. (What, you thought I would drink such a thing? The photo is milk I colored with cake icing dye.) But you want to know something funny? The TTB’s take on the squirrel appears to be wrong. After speaking with bartenders and poking around the web, the pink squirrel—born in Wisconsin in the 1940s—is traditionally made with crème de noyaux, not crème de almond. This liqueur tastes almondy but is actually made from the pits of apricots or other fruits in the prunus genus. Seems they really do need a pink squirrel meeting down in D.C.