The Year the Frappuccino Went National

It was considered something of a problem child. 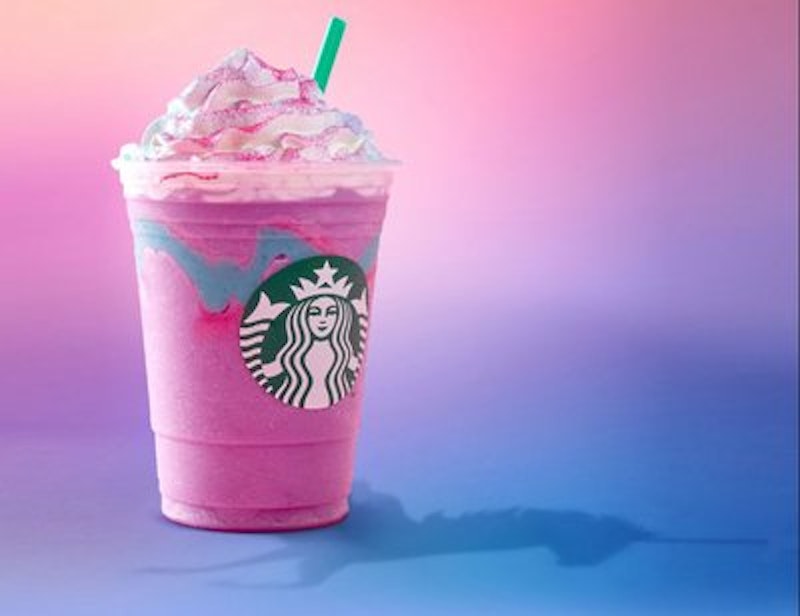 Starbucks introduced a drink called the Unicorn Frappuccino last weekend for a limited run, the Internet went wild, and some baristas lost it on social media. Many of the responses to those baristas have been a variation of, “Suck it up, buttercup, you were hired to do a job, and you should be grateful to have a job you spoiled turd.” I worked at Starbucks the year the Frappuccino went national, so I’m more sympathetic to the baristas, since I’ve walked in their sticky shoes.

I was surprised to find that the Frappuccino is over 20 years old, which makes me feel ancient. Starbucks was looking for a cold beverage to compete in Southern California, and created an early version of the Frappuccino in 1993. After acquiring a Boston chain called the Coffee Connection in 1994, Starbucks also acquired the Frappuccino name. In 1995, it would go nationwide.

At that point, Starbucks was still a novelty, and had a rough start breaking into the Chicago market. By 1995, there were a few scattered locations throughout the city and suburbs, and none of them had a drive-up window. Now there are 16 locations of some stripe or another (kiosks, Target, etc.) within a five-mile radius of my home.

The location I worked in was a newly-opened store on the suburban North Shore, the setting for many John Hughes movies. The store had an unfortunate layout, and only made sense if the designers anticipated that the baristas were all going to be well over six feet tall and 40 pounds underweight. One of the terrible things about the layout was that we couldn’t see the menu board. If someone asked a question about it, we’d have to run out from behind the counter to see what they were talking about. Another flaw was that the drain in the back room was at the highest point in the floor.

The Frappuccino itself was considered something of a problem child. I know the recipe has changed somewhat, so I don’t think I’m giving anything away. We’d have to brew mass quantities of Italian Roast coffee, then blend it with the Frappuccino mix, where the first ingredient listed was high fructose corn syrup. We’d keep that blend in a pitcher in the little fridge under the counter, along with several other pitchers in the big fridge in the back. In talking with the baristas at my regular Starbucks, I mentioned the use of Italian Roast, and they didn’t know what I was talking about.

I began working there in January, so the managers were still working out the logistics, and almost no one wanted anything cold. After Memorial Day, the Frappuccino was like a movie monster consuming baristas in its wake. We couldn’t brew the Italian Roast fast enough. Even then, we still needed to wait for it to cool before we could use it. We’d have to borrow cartons of mix from other stores. Our store was so busy that other store managers stopped by and their eyes would glaze over.

The affluent area gave us a very entitled type of customer. Our close proximity to California Pizza Kitchen also gave us girl drink drunks looking for something to take the edge off. I’d classify the worst customers into three groups: Eurotrash, teenage rich kids, and bored rich women. Eurotrash were terrible because they seemed to think that we cared about their lectures about Starbucks bastardizing the European café experience and threw tantrums when we told them they couldn’t smoke inside the store. Teenage rich kids were annoying because they kept changing their minds, which resulted in a lot of do-overs, and they were slobs. The rich ladies, with their giant rings and displaced eyebrows, were obsessive in their quest for the lowest calorie drink that wasn’t black coffee or straight-up espresso. They almost always decided on a bone-dry cappuccino with a hint of vanilla flavoring. It’s not that the rich ladies were particularly rude, it’s that they seemed to live in a persistent state of crisis over their weight, and it was draining to wait on them.

On hot days, our tiny store was filled to capacity with all those characters. In listening to the complaints of present-day baristas over the Unicorn Frappuccino, it sounds like they’re making the drinks one at a time. When I worked at Starbucks, we quickly figured out how to make two or three Frappuccinos simultaneously, if they were all the same flavor. At this point, it only came in Coffee and Mocha, and, aside from vanilla, I don’t remember people adding the flavored syrups to everything. Starbucks also didn’t have the domed toppers for the plastic cups yet, so anyone who wanted whipped cream on their Frappuccino was getting cheated. The only way to get the whipped cream on the drink and under the flat topper was to give them less Frappuccino, and considering how expensive they are, I advised against it. We also had only two blenders, and each only had two carafes. We always seemed to get busy when at least one carafe was in the dishwasher, which made rotating through them a little more of a challenge. On top of all that, we were still manually pulling espresso shots.

There are a few disasters that I remember vividly. The first was when an electrical fire started in the dishwasher. It was a slow morning, and the assistant manager and I were the only ones on duty while the head manager was at the bank. Shortly after going on, sparks shot out from the bottom of the dishwasher, with small flames forming. The assistant manager had me call the fire department while she not only evacuated our store, but also ran next door to Crate and Barrel to get everyone out. The head manager returned from the bank at the same time the fire department arrived, and my boss actually fought the fire chief about entering the store, because he thought it would look bad if people saw the fire department entering the store. The fire chief threatened to have him arrested, and explained that it would look even worse to let the store burn down. Ultimately, it wasn’t too terrible; as far as I know, we just needed to replace the dishwasher.

Another scary moment came when both ice machines broke. There was a small ice machine under the counter, and the big one in the back room. The small one was already broken, and our new store manager was running back and forth with buckets of ice. It was the hottest day of the year, and we were in the weeds, cranking out the Frappuccinos as fast as possible, hoping there was enough Italian Roast to get through the day. What actually happened was that the ice machine in the back room also broke. My manager kindly announced to a filled-to-capacity store waiting on their drinks that we were out of ice, and he was in the process of arranging an ice delivery. He offered refunds or coupons, or offered to change people’s orders to iced espresso-based drinks, but almost no one took them. Nearly everyone waited for their Frappuccinos. So we stood behind the counter watching our customers, waiting for the ice man, and the customers stared back at us, like the Sweaty Children of the Corn. When the ice man arrived, people applauded. And we got back to work.

For all of my complaints, I did enjoy working there. The pay was above minimum wage, and you didn’t have to work full time to be eligible for some benefits. Occasionally, I filled in at other stores and saw what normal looked like. I had some interesting co-workers, and Starbucks became a kind of central hub for other mall workers to commiserate on our customers’ need for constant pampering.

I’m not sure what sort of magic makes the Frappuccino so popular. Starbucks has expanded its range of flavors, and I’m partial to the Espresso Frappuccino. The Frappuccino takes a lot of heat for its high sugar content, and it’s best to treat it like a dessert item. As for the Unicorn Frappuccino, I couldn’t try it. I watched a barista make one for another customer, and it didn’t look appetizing. But if Starbucks wants to bring back the Mocha Valencia, I’ll be the first in line.