I wore a diaper when I worked in an Amazon warehouse. 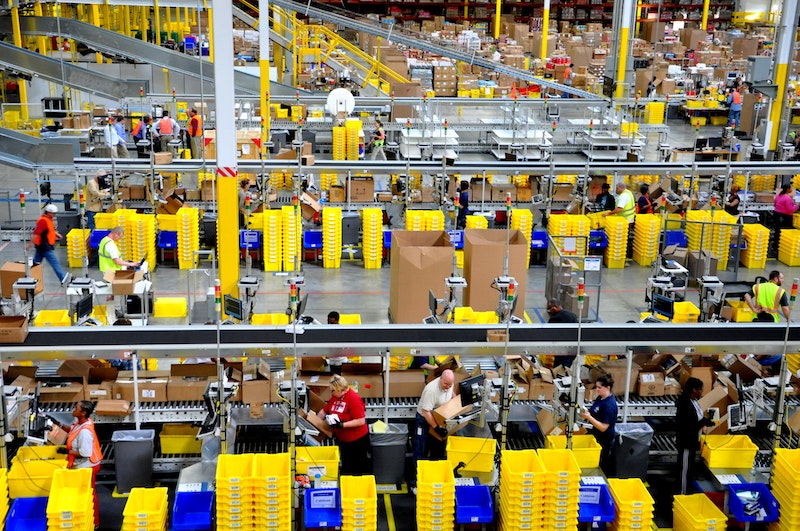 Please God, don’t let Amazon move to Massachusetts. I don’t want to be in the same state as their headquarters, even if I never have to see it. My PTSD is flaring up just thinking about it, remembering… sometimes it’s so hard to forget, and all I can do is remember… it comes in waves. First an interview, then a tour of the warehouse, then a job. I thought it would be a nine-to-five—I was on a respectable kick and wanted to prove to my holier than thou cousin and his bitch wife that I could be an empowered and informed member of society. So I took a grunt job working at an Amazon shipping and storage facility in… oh my god… I don’t even remember where it was. Maybe this was when I was stuck in the bayou with the Louisiana blues (Dylan reference). Or maybe it was when I was in Texas getting ready to send Rooster to Git—I mean, Guatemala. For… research. He loves traveling, thought I’d surprise him.

I wore a diaper when working for Amazon. We weren’t allowed any bathroom breaks, and any activity or body motion not directly related to the sorting, shipping, and selling of products was punishable by force and torture. One of my colleagues was “disappeared” after she fainted from dehydration in the parking lot during our lunch minute; another had his ribs broken by a robot; some were spanked by the secret sorting machine. Bezos has all of this filmed, by the way—I’m surprised The National Enquirer hasn’t picked up on that weird kink yet. I mean hey, whatever gets your rocks off, but I could’ve used a little less of the brass knuckles and a little more brass in my wallet, nawmsayin?

One day I was 14 hours into a shift with another 16 left and my diaper was full. I shouldn’t have had so much wine and tapas the night before but Barack likes to celebrate. As I was losing consciousness, my diaper started to slip off from the weight of the guano, and Barack’s advice came back to me: “Run shit on God.” I passed out before I could peck or spur-claw anyone, and when I woke up I was tied down in a windowless room with two pink-faced goons standing over me. I was waterboarded. I don’t want to talk about the rest. But in my delirium, I saw Bezos bash Barack’s skull in with a hammer. I saw the face of God and it was weeping. Just, okay, PLEASE… I can’t handle any more Amazon in my life. I already have nightmares of Jeff Bezos breaking into my barn, mistaking it for an outhouse on his massive estate, and shitting in my mouth. Not a little, a lot. A full log. This is what I think about at night. I can only hope you are so lucky, hipster.