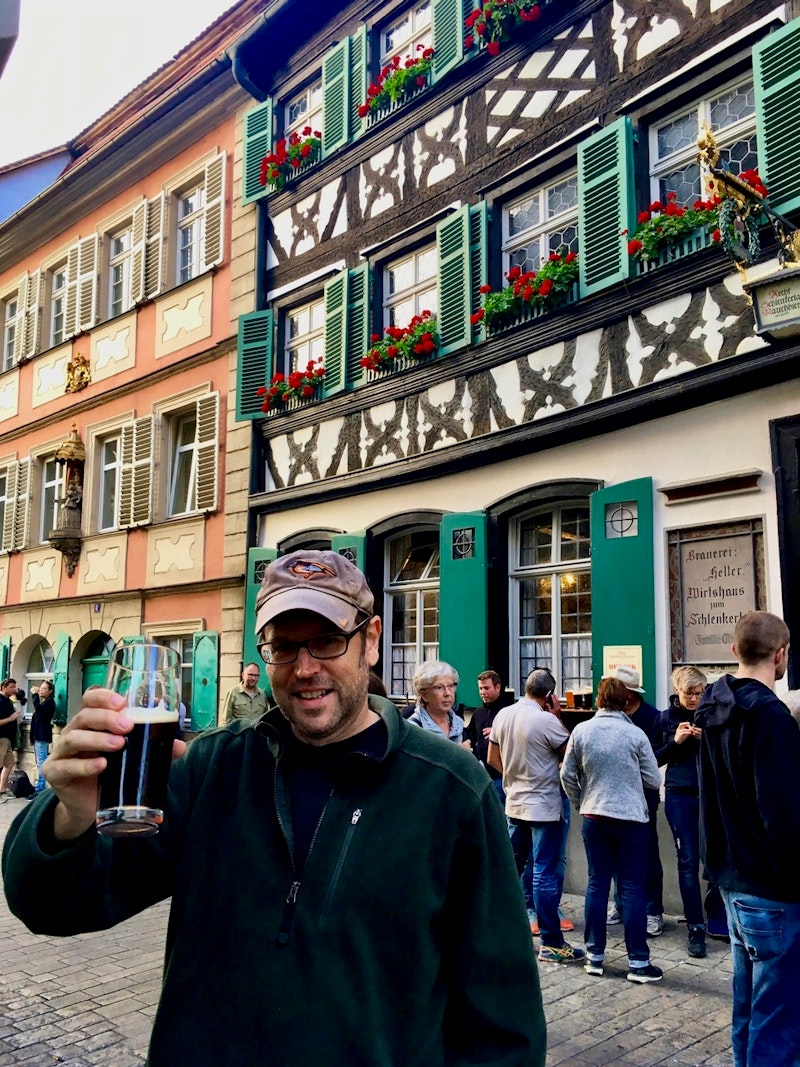 My wife and I spent the first half of October in Germany. Yes, it was wunderbar. And, no, we didn’t.

No, our trip to Germany was born of a pronouncement I made some years earlier. Rising to full height and with the most sonorous voice I could muster, I proclaimed to the Mrs. that I wanted to spend my 55th birthday in Bamberg, Germany drinking Schlenkerla Rauchbier direct from the wooden barrel. I don’t recall if I pounded a fist for emphasis or not. I do recall her response: “Okay, dear.”

Marriage is full of surprises. For logistical reasons we missed my actual birthday by a couple of weeks, but I did find myself in the postcard-pretty northern Bavaria city—little damaged by the war, where half-timbering meets rococo—drinking the much-storied brew in its 14th century home pub.

The Schlenkerla brand is famous for its line of rauchbiers—smoke beers—which kind of taste like bacon. The malt is kilned in-house over hardwood fires—birch or oak—and picks up a bacony taste from the contact with the smoke. (It’s basically the same way some Scotches taste smoky, only in their case the smoke is from burning peat.) It’s an ancient approach to brewing. All beers used to taste somewhat smoky until the Industrial Revolution arrived with new kilning equipment that took the smoke out of the equation.

Their Märzen rauchbier is perhaps the most representational of the style and is readily available at better beer stores here in the States. It’s a ruby-reddish beer where strong smoky aromas ride over malty sweetness with the understated bitterness of old-world hops adding counter notes. It’s simply one of the greats. The late Michael Jackson (no, not that one—the bearded Brit who largely birthed contemporary drinks writing) called it a “world classic.” (I should note that my indulgent wife doesn’t care for the stuff; for her 55th I’ll probably be dragged to a chocolate factory in Switzerland.)

Of course, I drank a lot of other beer in Deutschland. This was my first visit to a nation with a bona fide brewing culture. (In past trips to places such as Italy, Croatia, and Portugal, I drank the local wine.) While British cask ale remains a beloved tipple of mine, on our last trip there I had to lug along a printed beer guide just to find the dwindling number of pubs that can still pull a proper pint.

In Nuremberg, it was rotbier (red beer). Minuscule Pottenstein amid the bizarre rock formations of “Franconian Switzerland,” managed to have two brewers for post-hike refreshments. Bamberg’s Spezial brewery also serves a tasty rauchbier, while the city’s Klosterbraü brewery is known for its braunbier (brown beer). In booming Leipzig, gose is the thing—and it’s much less in-your-face salty/sour than the versions American brewers create. Along the way, I learned to love the unfiltered, unpasteurized kellerbiers and zwickels, sort of Germany’s answer to cask ale. It was all nice break from the tyranny of the IPA.

I was never served a beer without at least an inch of head. Glasses—and establishments dutifully employ different types for different beers—are designed to leave room for this blanket of foam. And everybody drinks beer everywhere all the time. In fine dining settings, you’ll see as many foamy mugs of beer heading to tables as stems of wine.

Rauchbier notwithstanding, whether it was a dark and roasty schwarzbier, a sweetly quenching hefeweizen, or a malty dunkel, it was all beer that, well, tasted like beer. And it didn’t knock you out with outrageous alcohol levels. But we’re home now. I recently received an email from a beer group I belong to with this subject line: Double New England Maple Pastry Black Coffee Milkshake IPA. No, really.

Now, I’m thankful the craft-beer revolution came along (and remember when we called it microbrewing). I recall when bar rails and chill cases offered little choice beyond fizzy macro lagers. But it’s a safe bet that I can walk into just about any brewery tap room today and instantly write off more than half the chalkboard offerings as being either too boozy or too wackadoodle. Is there an unadulterated, well-made pale ale, lager, or porter lurking among the taps? I can only hope.