This Ain’t The Darwinian, Dog-Eat-Dog World of Nature, Bub, We’re at CiCi’s. 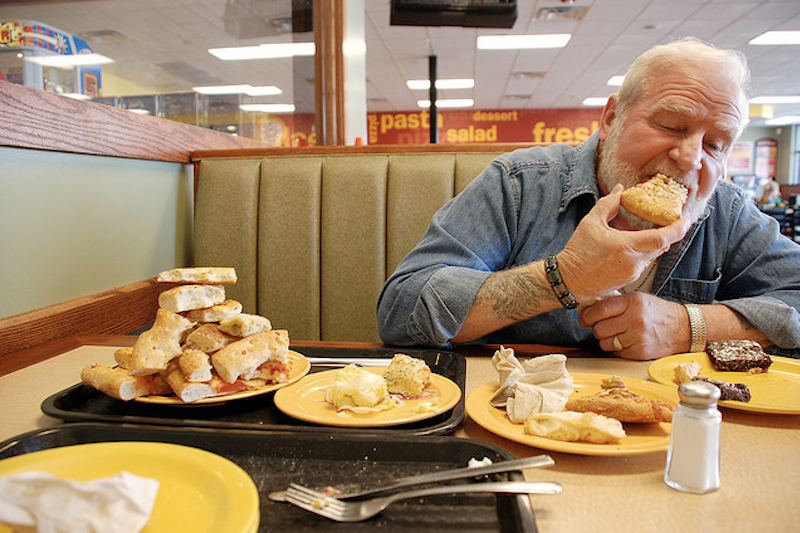 Perhaps you remember me. I certainly remember you: swarthy, in a navy blue t-shirt and flip-flops. We were queued up along the CiCi’s pizza credenza, watching one of many hyperactively helpful CiCi’s employees squire a pepperoni-and-green pepper pizza from oven to bar. Mouths watering, we panted together as the employee slowly cut the pie into slices, but it was in that moment that impatience moved me to reach to the right for some other kind of pizza—maybe a sausage slice, I can’t remember now—but when I turned back, not 30 seconds later, you had managed, with a surreptitious ease and a practiced nonchalance, to pile all eight slices onto your plate, to balance the wobbly tower of pizza with the hand not holding the plate, and to bounce back to your corpulent, pajama-clad Sasquatch/baby-mama.

There are issues of etiquette and social ethics too obvious and hackneyed to explore here, of course, but you—the pizza-purloining you, the editorial you, the wouldn’t-be-caught-dead-queuing-up at a CiCi’s you—might do well to think of my dog, Neeko. Neeko is a 105-pound German shepherd. At mealtime, for reasons related to base, primordial instincts, you don’t fuck with Neeko’s bowl. Nine times out of 10, I could give Neeko twice his usual allotment of kibble, and he would eat every last bite. Why? Because he’s a dog, and pre-historical orneriness is hard-wired into his brain; even though no one else living in this house wants to eat his dinner, he’ll still gobble it all down because something in his psyche directs him to as an antiquated self-preservation measure.

The great thing about being a human being is that reason can—or should be able to—overcome the inanity of instinct, so that we can arrive at common-sense decisions and move through logical cause-and-effect chains. For example: if I know that CiCi’s has an infinite supply of pizza, and that CiCi’s employees will make me any kind of pizza I want upon demand, it follows that I can pick up two or three pieces of one kind of pizza and return for more later. If the pizza bar is, say, 10 paces away from where I sit within an air conditioned environment, and I’m able to walk for thousands of paces at a time in the heat, it should follow that it isn’t necessary to load up with 20 plates of food—pizza, garlic bread, salad, noodles with mysterious red sauce and brownies—all at once, upon arrival, as if I’m terrified that starving chain-gangers will storm the restaurant and make immediately for the pizza bar but, like, I’ll be okay because I’ve hoarded enough grub in my booth to feed a battalion for a week. If I know that I can only consume four slices of pizza, then I should just eat four slices of pizza, and not 20 slices. The issue, as I see it, is not only that a good 90 percent of CiCi’s patrons are dangerously averse to this sort of linear thinking, but are also allowed to vote and drive automobiles—things that my dog cannot do, despite being smarter.