Could the Present Fruit of the Loom Ad Campaign Outlive Us All?

It certainly stands to reason; there’s nothing standing in its way. 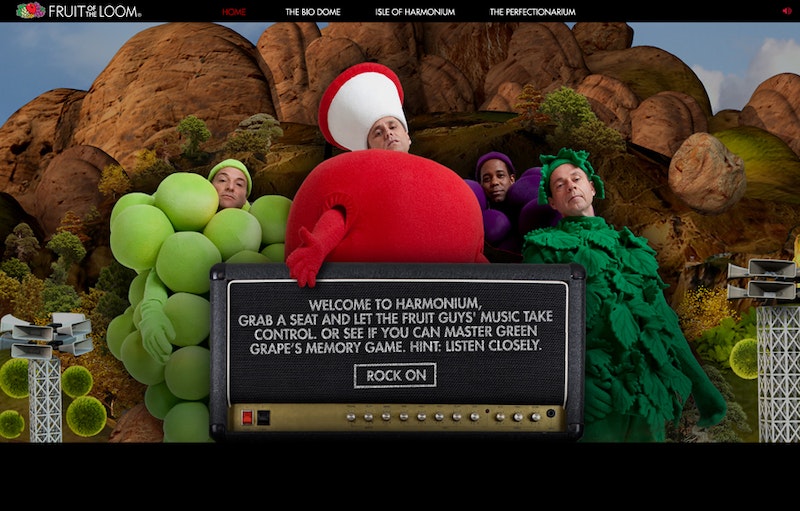 American television advertising is a transitory business, predicated upon the idea that the couch-bound audience is easily bored, in possession of gnat-sized attention spans. So the idea, most of the time, is to leave us wanting more of whatever was being used to successfully sell stuff before we can tune out: ergo the brief reigns of Old Spice Guy, the Ed O’Neill-led 1-800-Collect roundtable, and those pastel-drenched, Darius Rucker-as-a-metrosexual-cowboy-featuring Burger King spots.

(If you have no idea what I’m talking about, take heart; you’re not really supposed to remember that any of those commercials were ever on the air.)

Which brings us to theFruit Guys, a quartet of grown men in eye-popping colorful and undoubtedly cumbersome fruit costumes who are in essence Fruit Of The Loom’s answer to Geico’s late, lamented modern-yuppie cavemen and FreeCredit.com’s bygone genre-hopping no-hope rockers, and who will just not go away.

The lead Fruit Guy—an enormous Red Delicious—should be paying Ben Folds royalties. The others—a bemused bundle of purple grapes, a schlubby bundle of green grapes, and some other ragged thing that I’ve never quite identified—are the textbook definition of sidemen. The Fruit Guys, are, in fact, musically inclined, soft-rocking open mic events acoustically, warbling quasi-NAMBLA ballads about the relationship between fathers and sons, pounding drums while surrounded by female models in Fruit of the Loom unmentionables. (Take that, American Apparel!) More recently, in a bromantic, timely-circa-2005 masterstroke, the Fruit Guys sent up sword’n’sandal epics:

Those blank, non-plussed expressions on the dudes they service with undershirts? That’s me every time I lose another 20-30 seconds of my life to the Fruit Guys.

One could argue that these commercials are as much a critique of the narcissistic self-seriousness of much MOR pop as they are glorified underwear ads. But there’s a problem: the Fruit Guys’ projections of intensely knowing ludicrousness have the interesting effect of nullifying any intrinsic, lasting ironic value. So we’re left with a raft of campy, vaguely unwholesome underwear spots which, while not especially fun or funny, no one’s ready to pull the plug on for reasons that are a mystery.

So given that the preemptive default kill switch that usually prunes these notions before they can become tiresome has spared the Fruit Guys—and given, I suppose, that focus groups find their continuing sub-adventures “charming” and “uproarious”—it doesn’t seem unreasonable that this particular strain of consumerist anti-comedy could stumble on indefinitely, culminating in the Fruit Guys ringing the bell at the New York Stock Exchange and getting their own shitty animated series and turning what was probably supposed to be a temporary gig into an honest-to-God career. Still, I guess it could be worse. Consider what preceded this shtick: Charlie Sheen stalking Michael Jordan.