No One Cares That Gulf Is Back

Unless of course their prices are better. 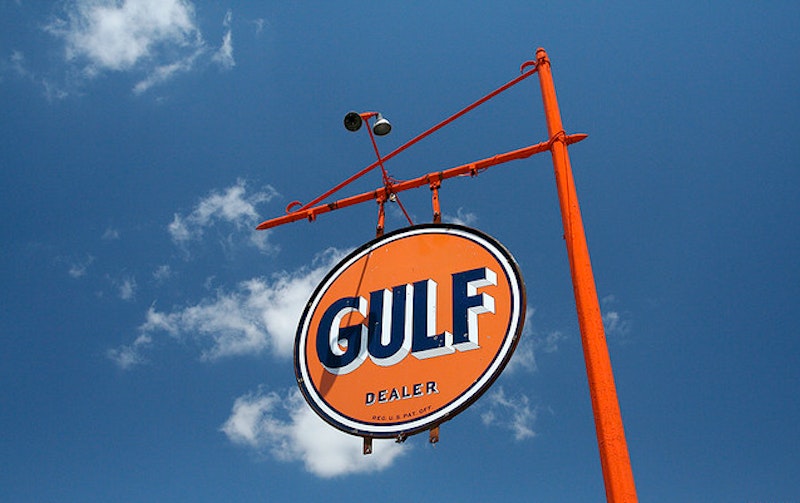 There was a time when reasonable adults actively and vocally favored or disdained gasoline brands the way most of us swear by particular types of soda. This one was especially good on mileage, use of that one resulted in frequent trips to the auto mechanic, another resulted in a strange thrumming sound while stuck in downtown traffic, and so on. There were certain stations that my mother would patronize almost religiously when I was growing up, to the exclusion of all other options, which meant that a shopping trip to Silver Spring or a sojourn to Western Maryland for weekend camping necessitated some degree of planning or strategy.

All of which seems somewhat quaint and antiquated today, of course. The recent erection of a Gulf billboard in the Austin metropolitan area declaring euphorically that “The legend is back!” next to a massive image of the semi-iconic Gulf service-station logo helps to underline the disconnect between how America views the oil industry and how the oil industry perceives itself.

When it comes to fueling, motorists contemplating the not-quite-stratospheric sightlines of corpocracy-enabled neon and plastic aren’t trolling for brands; it’s not as if we’re choosing between Oreo and Hydrox, Target or Walmart, or Newsweek and Time. Price is the thing, the seemingly inconsequential gulfs (no pun intended) of 10 and 20 cents per gallon that are huge in terms of consumer psychology and decision-making. This is how allegiance is determined, which is to say that the ideal of petrol allegiance is dead, broken, an anachronism so dated as to be laughable. The only folks for whom Gulf, BP, or Exxon signage carries any real meaning are those who watch American Pickers for tips on where to score more nostalgic, time-capsule totems. Putting up capital for billboards like this one—and rescuing the Gulf brand from a Land of the Lost cultural quicksand jumble—is a grand-scale fool’s errand, a needlessly meaningless gesture in a world full of needlessly meaningless gestures, a terroristic act of advertising pollution.