Pancakes embedded with bacon-bits? No thanks. 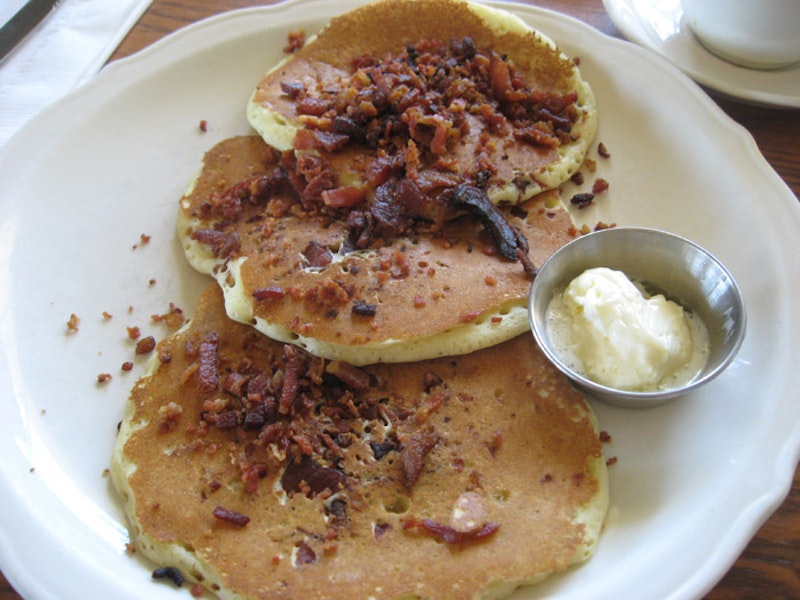 Chief among the many positives attributable to the pancake—aesthetic uniformity, aerodynamic ease, that it can double as headgear for infants—is its nature as a gustatory tabula rasa, its unbridled versatility. There is literally no limit to how one might dress up and subsequently enjoy a pancake, or several pancakes. Applications of butter, confections, syrups, and fruit toppings are no less logical than consumption accompanied by a tall, frosty glass of milk or squat mug of strong Belgian coffee. A case might be made, as well, for mouthfuls of pancake and similarly gnashed pork products—sausage, bacon, scrapple, those miniature ham steaks—an unlikely yet immense pairing of flavors.

One might be persuaded that the marriage of the pancake and crushed, freshly fried bacon would make for inevitable culinary triumph. On a recent trip to the Original House of Pancakes in Austin, three relatives ordered this specialty—"Bacon Pancakes"—though none of them were able to finish the meal in a single sitting, a collective failure I attributed at the time to the quantity of pancakes served and a limit of appetite. (A regular serving of pancakes = six. Your correspondent went in for the traditional full stack and tore that mother up, but in all fairness, I was really hungry.) Leftovers were entrusted to me, and a day or two later I sat down with a pair of swine-infused flapjacks, a tiny bottle of Cracker barrel syrup, some butter, and some rather high expectations.

First, it's important to understand that Original House of Pancakes hotcakes are pretty much pancake perfection: flavorful without being candied or overbearing, thoughtfully cooked, light but not crepe-light, their deliciousness increasing in direct proportion to the amount of butter and syrup applied. Often, restaurant pancakes are made with an overabundance of flour, resulting in cakes that leave the customer quickly stuffed, bloated; OHOP traditional full stacks satisfy without overwhelming.

Not so the Bacon Pancake plate. The Bacon Pancake plate has two strikes against it from the jump: these cakes are heavy and filling, supplementing the usual amount of batter with a not inconsiderable hash of shredded bacon. It gets worse, because it turns out that the commingled tastes of bacon grease—the grease was not removed or absorbed in any way, and the fat wasn’t trimmed, so it’s in there as well—makes the pancake gross. Really, really gross, and the grossness is in no way abated by the conflicting textures at work in every bite of these things. And it doesn't matter how one eats them—plain, or with some sort of condiment—it's a process, a conundrum, to eat Bacon Pancakes. If you find yourself settling in at an Original House of Pancakes and notice other diners chewing thoughtfully and laboriously, as though puzzling through complex mathematical equations or a Latin translation of The New Testament, you can hazard a pretty solid guess as to what they ordered. Don't make the same mistake.