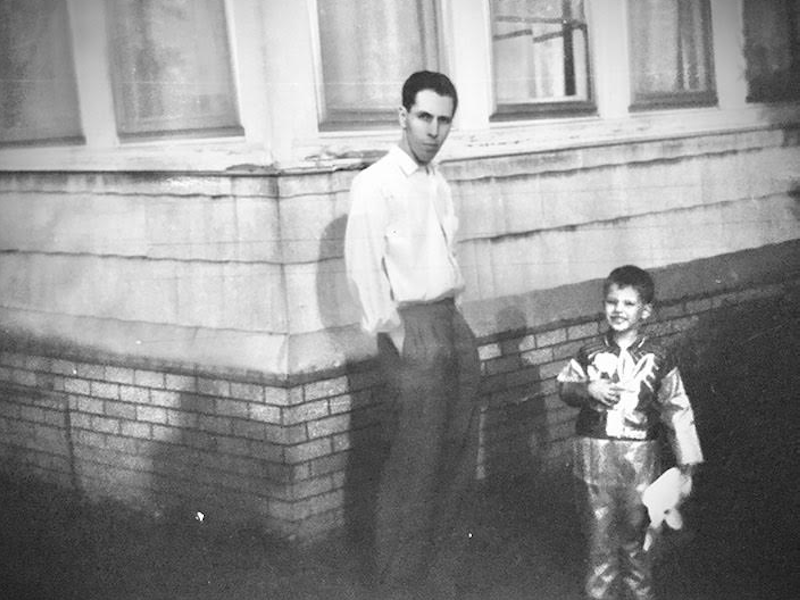 My father Lou and me in Baltimore, 1964, on Halloween in Baltimore’s Hamilton neighborhood.

There were reports of The Jetsons flying around on their spaceships over the Valley of the Dolls. It’s puzzling remembering the 1960s; an enigmatic, promise-filled decade; rife with inconsistencies. Recording engineer Joe Meek’s 1960 “I Hear a New World” asks what’s in store me, with its mysterious inaugural invitation. I was young with vague impressions, but retained the I Am Curious part, so I asked friends and eyewitnesses. They said the cultural phenomenon is gone forever—you’ll never see times like these again.

There’s debate over the ending bookend. The Manson murders on August 9th, 1969, are mentioned, as is Meredith Curly Hunter’s killing at Altamont Speedway on December 6th that year. Others believe it happened on May 4th, 1970, at Kent State University in Ohio. On the frontlines in Baltimore, my strange but familiar world, some minutiae etched itself in my consciousness.

It’s difficult to envision the 1960s without conjuring up fragrance memories from elementary school: girl bombs wore Faberge Tigress. That scent, as well as a burst of citrus from Jean Nate After Bath Splash, was very popular. Wearing perfume at school was frowned upon, most teachers didn’t appear to mind. First period homeroom was full of pleasant, musky smells.

What really upset the nuns was the indecent behavior of rising hemlines. The hunt was on. Before class in the mornings, Sisters ran around schoolyards with rulers in their hands, measuring the length of a girl’s uniform skirt over her knees; some students were sent home to change. Wearing such a youthful, captivating fragrance demanded a certain level of savoir-faire.

“Hey, get off that furniture, you trying to ruin it.” said television personality Royal Parker. It was a classic local Baltimore television commercial for vinyl slipcovers. On a living room set, three giddy kids bounced up and down. In July, if you didn’t have air conditioning back then, and most people didn’t, you had to be careful visiting a neighbor if they had slipcovers. The ad was big hit with the kids, and it provided us some great ideas. We attempted it every time it aired because we didn’t have slipcovers.

On late-summer afternoons, there was a loud, screeching noise. The Good Humor guy floored it. His truck rounded the corner. The ice cream man came whizzing by at 50 miles per hour “jing-jing-jingling” on a residential side street. He did a quick U-turn at the end of the block, then slowly returned. Children gathered as the truck pulled up to the curb. I looked for loose change the second I heard the bells. Some coins were stashed in an old, wooden Musketeers cigar box upstairs on top of my bedroom dresser, or “Chester Drawers,” as we said.

Back downstairs, a red and white Better Homes and Gardens cookbook sat on the kitchen countertop, confirming tonight’s dinner: pot roast. Eat dessert first. The screen door slammed. Thinking, I’ll probably have to wash the dishes tonight. Now what will it be—a fruit-flavored popsicle—rainbow, pink lemonade, lime or, maybe a chocolate eclair bar on a stick? Standing in front of the ice cream truck, Little Rickie bit off more than he could chew. His ice cream sandwich drizzled a Jackson Pollock on his t-shirt making a big mess.

Even as a kid growing up, you were aware when the holiday season kicked off in late October. Next to the Read’s Drugstore, the Arcade movie theater in Hamilton, a small stage was set up on Harford Rd. for Halloween. A small procession with pirates, devils, and clowns were in attendance. I wore a $1.98 Bugs Bunny costume from Kresge’s 5 & 10 Department Store.

Near the same intersection at Harford Rd. and Hamilton Ave. in 1969, I purchased a Wallace Beery jersey from Pair Tree Boutique. Another store further up the road, First National Grape Boutique, was in an old bank on Taylor Ave. They stocked patchouli and strawberry oils and had a wild, psychedelic blacklight poster room.

I never saw a Baltimore Oriole my entire time in Baltimore, except for a few baseball games at Memorial Stadium. I searched everywhere; in yards and treetops and found none. An oriole’s plumage of rusty-orange-colored feathers, mimics the coat of arms of Lord Baltimore, proving it’s an elusive bird. Occasionally, some neighborhood kids ran off with the mouth.

“Look, there’s an oriole!” pointing to a random bird in a tree.

In the summer months, it was all about the cool. Bring the bikini. The 17-year-old teens hopped into the bucket backseats; they were drawn to the horsepower of a V8 Pontiac GTO convertible. Blasting tunes an 8-Track cassette player. What a way to go on a youthful wanderlust on a weekend trip down to Ocean City, MD.

If you weren’t incarcerated, in reform school, or at Spring Grove or Sheppard Pratt Psychiatric Hospitals, and weren’t experiencing heady days, you often stayed at home because someone you knew was on a local television show. The Kerby Scott Show aired every Friday before the WBAL-TV 11 evening news anchored by Rolf Hertsgaard. The weekly live TV studio dance event was hosted by DJ Scott.

I was spellbound watching the Mod Squad celebration; bell bottoms, mini-skirts and fishnet stockings. Local and national music groups, including The Cowsills, made appearances. When the go-go dancers broke into the Pony, Twist and Watusi, body parts moved in every direction. There was lots of hair tossing.

Beware of the Thing. On July 30th,1966, Billboard’s number one single was “Wild Thing” by the British group The Troggs. From AM radios to vinyl 45s from the Arcade Record Shop, everywhere you went you heard the solid, garage anthem. “Wild Thing” along with Merrilee Rush’s “Angel of the Morning” was written by composer Chip Taylor, actor Jon Voight’s brother, Angelina Jolie’s uncle.

The Troggs liked to dress in white vertical-striped suits on occasion. The song, rumored to be recorded in 20 minutes, has the most famous ocarina instrumental break of all time. Legendary lead singer Reg Presley’s head slides from side to side. He vented attitude with a smile accompanied by a lustful sneer. Performed live at Monterey Pop in 1967, Jimi Hendrix smashed his guitar and lit it on fire. Shake it, shake it, Wild Thing.

Mass consumerism reached unseen heights. This was a generation hell-bent on defining its own self-image in a society saturated with consumption. Radio still played a dynamic force in media. At the local newsstand, print held strong;Tiger Beat was one of many teen fan magazines readily available. It made sense for teenagers to put their Barbies away toward the end of the decade. Joanne, Darlene and Vicki were now old enough to go to CYO dances and listen to bubble gum pop. There were a lot of schoolgirls whispering about heartthrobs gathered in the parking lot outside the Hamilton Recreation Center on Sefton Ave. They had the power, as the girls squeezed the last drop of Clearasil acne cream from the tube.

If you didn’t have a ponytail, you whipped-out a rat tail comb and began working a Toni hair perm. In terms of hair, the more, the better. Another interesting feature was their tongues were stained purple and scarlet from SweeTarts and Smarties candy. They all knew this was the real thing because things go better with Coke. Drink it quick, the apex wouldn’t last long. Funny how time goes around in circles, but history remains steady.