The Sledder’s Guide to Baltimore

The best spots in the city to go snowblind. 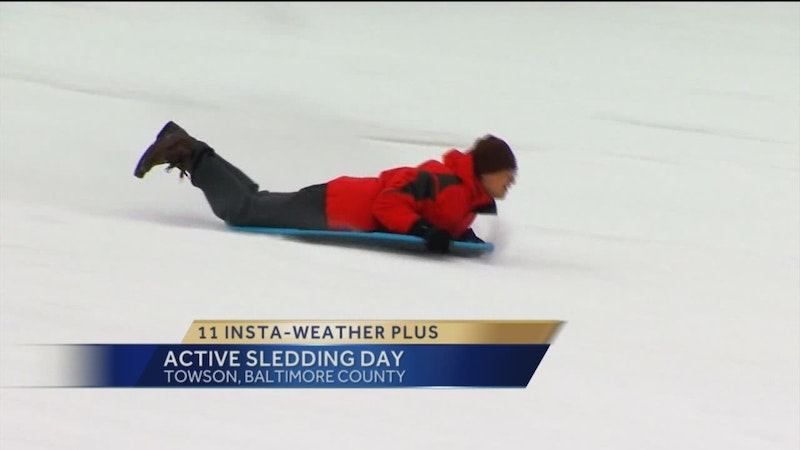 As Baltimore enters its 293rd winter, the tricentennial just around the corner, I ask myself the question that I ask near the end of every December: what kind of snowfall are we looking at this year? Will it be like the winter I moved to Baltimore—aka Snowmageddon—when we got a two-footer, and then another foot and a half days later? Or will it be like last winter, when we barely got a dusting? The suspense keeps me going past the holidays (Maryland hasn’t had a white Christmas in 20 years) and through the doldrums of seasonal depression. Meanwhile, the old saucer and toboggan collect dust under the basement stairs, begging to be used. Patience, my pretties.

At the threshold of middle age, I’m supposed to put away childish things like sledding, or at least have a kid to justify them. I’m supposed to complain about the snow and the amount of money I pay in taxes to have it plowed. But the truth is that I love snow, and I hope I never take the beauty of snowfall for granted, no matter how old and jaded I get. When I’m in my 70s, I’d like to think I’ll still throw on snow gear and trek to my preferred spots, toboggan in tow.

Here are just a few of my favorites, plus a couple I want to try soon.

Wyman Park—There used to be a really good slope across from the BMA that would send you off the stone border into the Wyman Park Dells, but overgrowth has rendered it no longer viable. The next best thing is the small slope that goes down from 31st St to Wyman Park Dr., near the Stony Run Trail, but it’s really only good for kids. Maybe when I’m 70 it’ll be more my speed.

Patterson Park—The hill is mids, but the snow-covered pagoda is a sight to behold. Have fun finding a place to park.

Baltimore County Board of Education—I’ve never actually sledded here. I often drive by it on my way to Trader Joe’s, a drive that’s too treacherous for snow and ice. But man, what a slope! It reminds me of Art Hill, the main sledding destination in my hometown of St. Louis: surrounded by a long driveway, it’s a huge, steep hill that ends rather abruptly in a ditch (better than Art Hill’s abrupt end in a fountain, protected by hay barrels that some unlucky sledder always manages to bypass). Maybe next snow I’ll roll the dice and drive over there, ending up in a ditch, whether by car or sled.

Mount Royal Station—This was the go-to sledding spot when I lived in Mt. Vernon, and it’s a pretty good one. There’s a somewhat short but very steep hill that encircles the station. Be careful, though: the lot at the bottom of the hill is usually plowed, resulting in ramps that’ll launch you out into the lot; if you land on the sled it’s fine, but if you fall off midair, the cobblestone can fuck you up pretty bad. I know from experience.

Leakin Park—Another one that I’ve never been to but have heard good things about, specifically the hill that runs behind Crimea Mansion. I hear there are sculptures on the hills that you have to dodge, so this might be for more advanced sledders.

Roland Park Country Club—This is the good shit. There are two hills: one that descends from the country club building, which is extremely steep and long; and another one off to the side, separated by trees, that’s not quite as steep but also goes just as long. In an apparent homage to Caddyshack, the country club staff haven’t been kind to me and my fellow sledders (most of them a third my age), often threatening to call the police for trespassing. (Imagine calling the cops on children for sledding.) The good news is that Roland Park recently purchased the property from the country club, renamed Hillside Park and open to the public all year round—including snow days.