He Makes The Sweaters 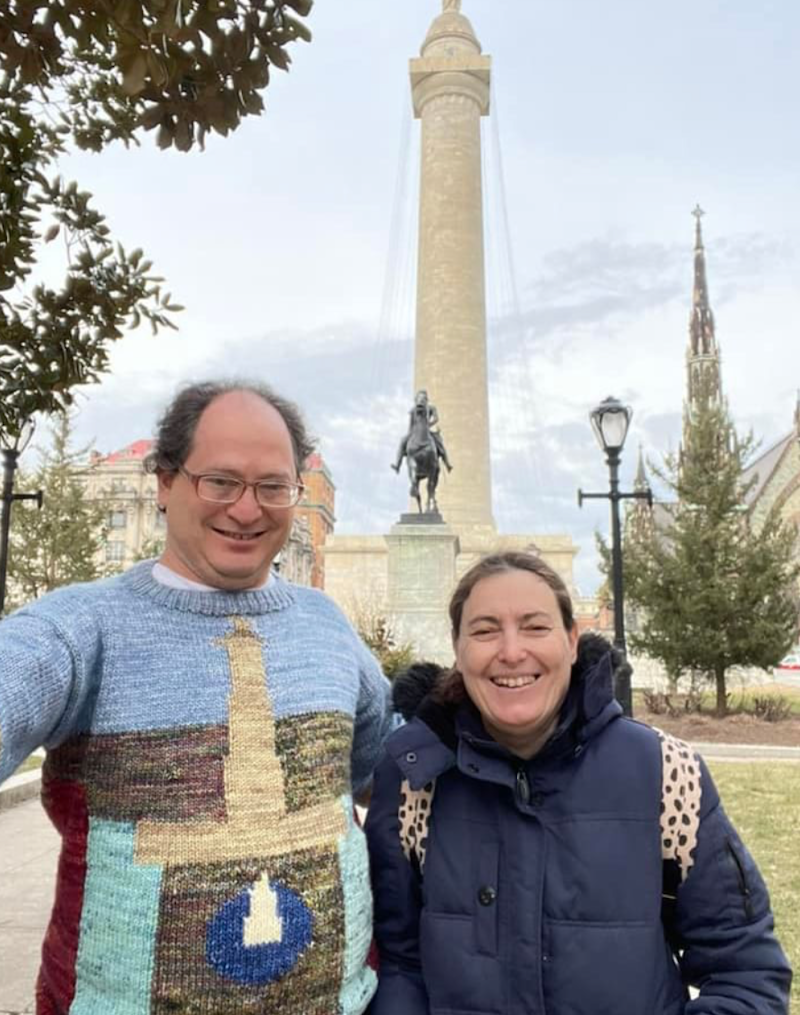 I recently chatted with hometown handicraft hero Sam Barsky, famous for his sweaters depicting historical monuments in Baltimore and around the world, then posing beside them for social media photos, sometimes with his wife Deborah. Stories about him are in Time, the New York Times, Baltimore Sun and beyond. 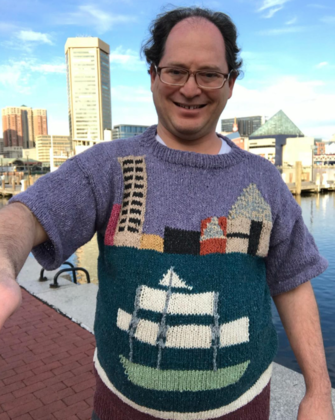 Splice Today: Did you grow up in Maryland? When did you start making sweaters and how many have you made so far?

Sam Barsky: Yes, I grew up in Maryland. I’ve lived most of my life in Baltimore. I started making sweaters in 1999. I’ve made 160 so far and plan to make many more in the future.

ST: I saw on TikTok that your most frequently asked question is whether you’ll sell your sweaters, and you answered that you can’t be a “human sweater mill.” What’s the most money you’ve ever been offered to make a sweater for someone and are there any circumstances you’d make someone a custom sweater?

Sam: I’ve been offered several thousand dollars for a sweater at times. I’ve turned down these offers that are just for the sweater itself. What I will do is, if someone wants me to travel somewhere and knit a sweater of a landmark in that place, I’m willing to take that offer if all my travel expenses are covered and I’m well-compensated. When I take such an offer, I usually keep the sweater as part of my collection, often with plans to market t-shirts of the design. Only once did I let the venue keep one. In 2018, the Boulder Library asked me to knit 3 sweaters or Boulder area landmarks so they could be ‘borrowed’ in the style of books and the borrowers could take their own selfies in them. Per the agreement, they kept the one depicting the library building itself. I’m also willing to lend my sweaters out for a temporary display.

ST: I read that it takes you about a month to make a sweater. Do you also work part or full time or are the t-shirt replicas of the sweaters your business now?

Sam: I make a living in several ways. Selling t-shirts is one of them. I also do greetings for special occasions such as birthdays, anniversaries, and holidays in relevant sweaters and I give speeches and teach classes about my knitting to audiences.

ST: How many sweater replica t-shirts do you make, how do you choose which sweaters to make into t-shirts and which is the most popular

Sam: So far, 29 of my sweaters are available as t-shirts, with many more coming in the future. I don’t have an inventory of them. They’re produced on demand as they’re ordered by Picture This Clothing in Las Vegas. It varies at different time periods which one is most popular, but in recent months, the sweater of sweaters and the human anatomy ones have been the top sellers. Also, the ants, unicorn, and power lines sell well.

ST: Which are your favorite sweaters and why?

Sam: I don’t have any favorite sweaters. It’s too difficult to pick favorites.

ST: You’ve achieved fame from your sweater creations. What do you think fascinates people about your story?

Sam: I think people just find it interesting. For many years before I achieved this fame, I found impressing others with my sweaters was easy. But for the most part, only people I knew locally were familiar with my sweaters. Then social media changed all of that. Even so, it took several years of sharing on social media before I managed to reach worldwide fame.

ST: You often comment about whether or not there’s a green screen background or whether the scene is real, which leads to many comments. How do you handle internet trolls or rude commenters?

Sam: Basically, I always tell the truth about it. It’s up to someone else if they want to believe me. But for one who knows how, it’s easy to tell if something is a green screen or not. Most of the still photos are actually of me in the real places. There are some exceptions, for example my picture with my Egyptian Pyramid sweater is in front of the Luxor in Vegas because I haven’t been to Egypt, and my I Have A Dream Speech sweater is in front of old pictures of the speech, which happened before I was born. When I use an app to create such an image, I make it clear in the post.

Most of the Reels/TikTok videos are with green screens by default. A very small number of them so far are in the real place, and that’s why I say “this is not a green screen.”

ST: What are your favorite and least favorite things about social media?

Sam: Social media is mostly positive. It enables people to stay connected to relatives and friends they wouldn’tbe able to see or talk to often, and gives people the opportunity to make new friends and meet up with them when you travel to their hometowns. Social media also enables people who want to start or run businesses to find customers and earn a livelihood. Social media does have its drawbacks, some that’re well-known. There are plenty of troublemakers. This is expected because almost anyone can use it. But I don’t let them bother me and I focus on the positive.

ST: Do you have any favorite stories about people you’ve met?

Sam: Yes, too many to list here. It happens routinely now that I’m in some public place and someone approaches me and tells me they follow me on Instagram and/or TikTok. I’ve had it happen several times that I have come to a location to take a picture wearing my sweater there and been approached by someone who identifies me as the one who makes the sweaters. Many of these people have gotten in the pictures with me. Not related to that, I’ve had plenty of times when I’m in a foreign country and I meet someone and strike up a conversation, only to find out that the person also is from Baltimore, and in some cases lives in my neighborhood or knows someone I know. 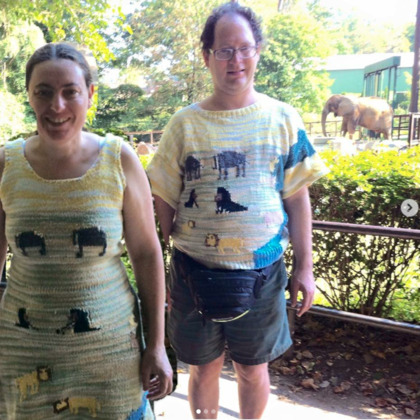 ST: You and your wife Deborah have been married for nearly 20 years? Are you celebrating with any special trips?

Sam: Actually, we just celebrated our 19th anniversary this past November. Deborah told me she wanted to go on a cruise, something we haven’t done since the start of the pandemic. I’m looking into it now.

ST: What are some destinations in the region that you have in mind for upcoming sweaters?

Sam: I have a long wish list for possible sweaters and I know I’ll never do all of them. In the United States, I’d like to do the Space Needle, Multnomah Falls, and a lot of the national parks. Eventually I’d like to do at least one of something in each of the 50 states. I’d also like to do more international landmarks, as well as a few more local ones.

ST: If you could make a sweater and go one place anywhere in the world to take a photo with it, where would it be?