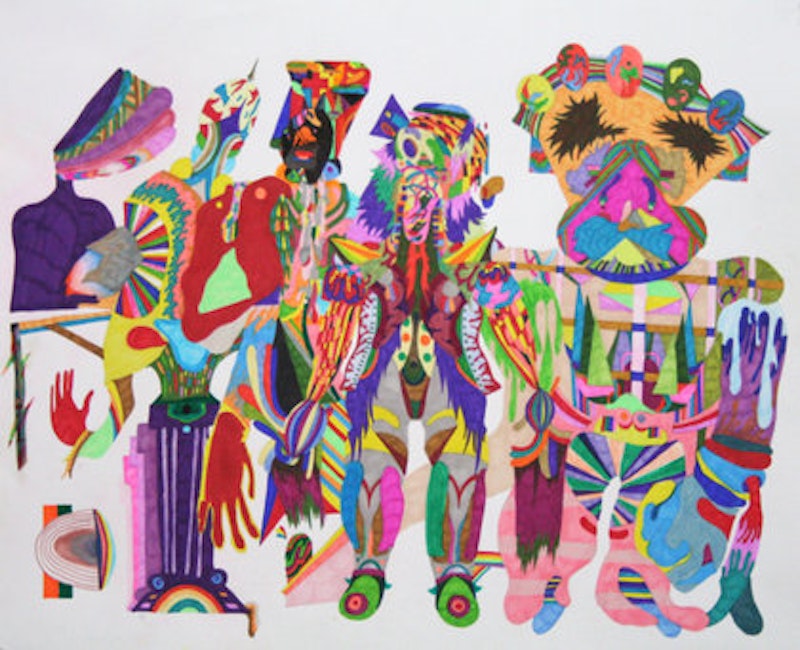 In the following interview I spoke with Baltimore visual artist and musician D’Metrius Rice. His painting exhibition entitled “Meme Schemes” is currently on view at the Windup Space music venue in Baltimore’s Station North Arts District. His most recent recording, ESP’N, part digital sound collage and part drumming odyssey, was released last month. D’Metrius discussed his drumming influences, Francis Bacon, and the tricky subject of how our brain manages to focus in an age of information overload.

Splice Today: I first came across your work as a painter. It seemed to me that at that time there was this massive untapped audio complement to it somewhere lurking beneath the canvas. Shortly after, I came across that audio complement in the form of your band Teenage Souls. How long have you been doing Teenage Souls? Were there previous incarnations of the project? Are there future incarnations that you see bubbling up within your present music?

D’Metrius Rice: I have been performing and recording music as Teenage Souls since around 2007. Before that, a much wilder version of the project was called Bone Guardian, which barely saw the light of day before Teenage Souls was adopted. The future of this project is sort of a split into alter egos. One is going to focus on production and songwriting without live drums being so focal. The other will continue in the direction of live drumming over sound collages.

ST: Given that information, one could conclude that in your mind there is this defined boundary between abstract rhythmic concepts and compartmentalized song concepts. Is that accurate?

ST: Where did you learn to play the drums? What event or person has defined your ultimate goals in drumming? Any drummers that you can recommend that are making challenging contemporary work?

DR: I learned to play the drums beginning in 2005 when I’d pieced together my first kit. I was pretty impressed with the idea of drum and bass, Indian and African music, or anything percussive which had a lot of energy in it. Metal never really gelled with me for some reason. I wanted that kind of energy, but with a delivery closer to the late 1980s and early 90s hip-hop I grew up on. Then Zach Hill came along. I'd been waiting for someone like him for a while, a really positive influence and someone who seemed to validate my oddball compositional ideas. Nick Podgurski, of Baltimore's Yukon and other projects, has always challenged my notions of meter and tone. Greg Saunier of Deerhoof does so much with so little. I played with this Italian band recently called Father Murphy whose drummer had a very abstract and non-linear approach to percussion. Almost as though that sound the drums produced were merely the residue of each gesture and that gesture or effort was emphasized. Ethan Snyder of Whoarfrost bends most of rhythms rules, and plays phrases, that should technically be impossible, but somehow are not.

ST: In previous conversations about your painting there is an element of multi-dimensionality that it seemed you were keen on addressing. It was as if there was this refreshing nexus of pop physics and pop spirituality coming through in the colors and composition. Can you speak to that? What is the link between your artwork and your music?

DR: Everything in my life centers around the notion that perception is the major vehicle of experience. "What you see is what you get" is something I don't believe in, but rather something I want to subvert by questioning what "seeing" and "getting" is. In music and art, I believe I set the stage full of examples of how we often get more than we realize, spiritually, physically and experientially, and are selective about what we acknowledge. That's life, especially when we live in an age where there is such abundance and multiplicity that we are forced to compress and select information that is relevant to us. I take that process and bend the components that measure and select and reduce information and filter it through some sort of chaos lens, so that the biases in the selections are harder to pinpoint, and in the end, after every extrapolation has been played out, we can survey unforeseen combinations of elements of the human condition and weave more delicate and telling webs of our own personal as well as larger contexts. I don't have the time or power to render every combination of elements or references, but I can at least venture outward, and bring you back something unique and stimulating to compliment the regularity in our daily reality.

ST: There are questions these days about how modern society is dealing with the influx of new information. That information comes in at a rate that we can’t keep up with is unsettling on a biological level. In the hands of a healthcare specialist, the handling of your observation that we “see” and “get” more than we can possibly handle would possibly result in the prescription of attention medication. Do you think that there is a value in understanding that there is more going on in the mind than is immediately obvious? Is the prospect of creating a world of super-focused beings something that you think is in conflict with art and artists?

DR: Yes, there is definitely a value in being aware that not everything of substance is tangible. I know that seems like a contradiction, but even a concept such as belief has a lot of gravity in it's many applications, but is not a literal object to refer to. There are many aspects of life that are more hidden from view than that. We have pursued belief because we want it, and gave it a name, it was already up there in the air somewhere and we just grabbed it and pulled it down. More intangible aspects of the universe will come into focus when we begin to change what we want. To me, focus isn't always about selection. Sometimes focus is about reduction. If we are incredibly focused, we could just as easily miss something important to us by reducing our options, just the same as if we were "too open" to chose a disciplined path. However, certain kinds of focus can lead to developments in quality of life, art, science, etc. that are necessarily sequential and couldn't have been arrived at without staying immersed in the first place. I'd leave it up to the individual to ask themselves what they want and why.

ST: In listening to ESP'N there's this sense of being inside a totally off-the-wall sound montage. One is immediately faced with this battle between organic and digital sounds. It comes across as being very Autechre-ish in its approach. However, being a drummer, I would imagine you are equally informed by the traditional four-piece rock band format. Can you enlighten us on your thoughts about how specific sounds and arrangements come about in your work?

DR: For a long time I wanted to oppose the obsession with gear and musical pretense by only allowing myself to use largely undesirable synthetic instrument sounds that came with the program called Fruity Loops that I learned how to use about 10 years ago. I also liked that Fruity Loops was deemed a "childish" program, when in fact its interface is just laid out in a way that makes it easier to find the parameters you want to edit. I felt like there was a lot of room to carve a niche out of using this relatively simple sequencing program to make audio events that were all my own. I'll start out with something that has a texture I find useful and each decision I make with that sound, pitch, timbre, resonance, etc. is merely a reaction to each decision that came before. I don't think about the acoustic drums too much when I'm arranging and composing other than I try to leave some room for them. At some point in the writing and meandering, there is some kind of focal point, maybe the way one sound mixes with another or doesn't, something that will create a kind of humor or value beyond what initially went into it, then the sounds start to become less like obfuscated noises and more like instruments in some kind of purposeful albeit, largely alien orchestra.

ST: Is there a glockenspiel in this alien orchestra?

DR: It phases in and out from time to time.

ST: David Lynch once said that Francis Bacon was artistically, for him "The Number One Guy." Is there a Francis Bacon in your artistic life?

DR: For a while it was Francis Bacon! I’m really impressed by the production values of a young man from London, who goes by the name Balam Acab. I have more pervasive influences, but not often as heavily impacting. He is able to somehow evoke and control nostalgia by the degree without being heavy-handed or corny. In visual art, I'm extremely taken by the work of Brooklyn artist, Eric Shaw. His work is the summation of almost all my artistic influences. I feel like I jack his ideas all the time.

DR: In art, I’m interested in further exploiting the limitations of 2-D art, as well as dissolving and collaging styles, not just visual elements. In a future piece, you may see a smear next to a realistic countryside, which has Saturday morning cartoon vomit projecting into the picture from the side, followed by strict geometric forms. In the more immediate future, I'm looking to isolate and pair down elements in the way I have been working. I’d like to limit my palette and really consider and adhere to specific rules that I set for myself. In music, I'm working on a new Teenage Souls record called Mind Reader. This record is a lot different from my other recordings in that, it was started with drums, probably the most frenetic and heavily patterned work thus far, with the intent of wrapping the rest of the music around the drums. Sounds are more carefully crafted, but more harshly collaged and varied than previous records. There is a much more of an organic quality to how it's being arranged and how it feels. I play in several newly formed bands, and I'm looking forward to putting music together more collaboratively.

D’Metrius’ artwork can be viewed on his personal webpage: http://djrt.tumblr.com/

D’Metrius’ music recordings can be downloaded for free from his Bandcamp page: http://teenagesouls.bandcamp.com/