The sublime dislocation of NARC. 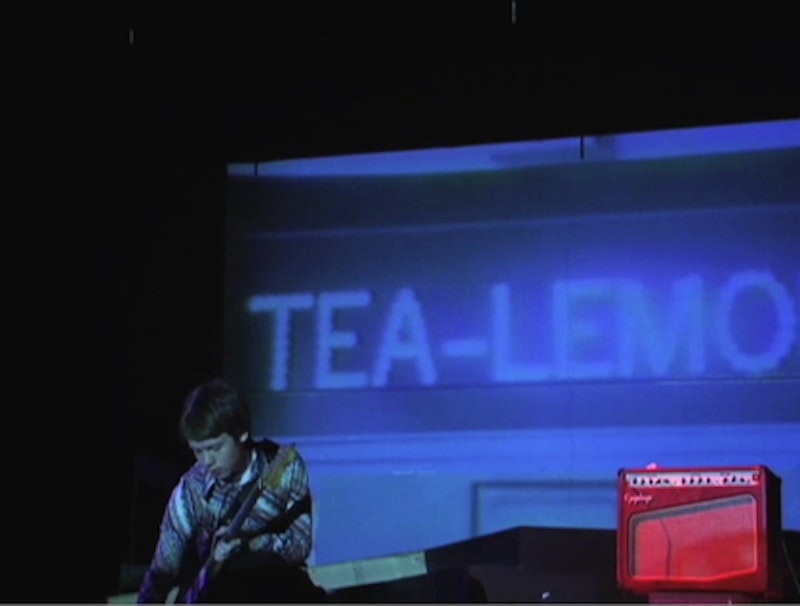 One lone coupling of drowsy, gorgeous notes trailed by another. Fingers audibly sliding upon strings, bowing and stabbing at them. Chords actualized and expanding in a daze, first in an orderly fashion then with a slightly greater urgency and agency; chords that blossom, chords that numb, chords representative of awakening.

This is "Ginger," the opening fugue from Mister Hands (MT5 Tapes) the new cassette from NARC's Nicky Smith; the album can be had free online in mp3 form, and experienced in a variety of iterations, but one should ideally begin with "Ginger" every time, because "Ginger" is pure acoustic guitar innocence—guitar original sin, if you like, a sonic babe in a manger, in swaddling reverb—and Mister Hands is essentially an album about what guitars are capable of, about possibilities and directions. Many of these directions are less innocent, but they're pursued with abandon, with brio; they're studies that feel unstudied.

I've listened to this record a few dozen times now on a semi-random setting; my iPod is somehow configured to kick off with the lead track but bounce around the playlist thereafter, almost indiscriminately. As a result, I have no idea what the proper Mister Hands progression should be, where one scrambling of riffs should precede a mangling of auditory syntax. In other words, I'm perpetually lost in Smith's wood shedding wilderness and have no interest in knowing where I should be or what I should be hearing at any given point. There's something freeing about this sense of dislocation, this feeling that I'm never hearing the same album twice or fully coming to terms with it; Mister Hands feels eternally young.

Before it is observed that this state may be achieved with any collection of songs, we might consider the abstractions on offer here, which serve to highlight the seeming intangibility of the whole. We might examine the flurry of synthesizer chirps and procession of Knight Rider-theme bass lines that characterize "The Bomb”—it does imply a ticking destructive device, doesn't it, or a team of specialists creeping forth in stealth to disarm such a device—and admire the song's taut economy, how clipped and tense the fret work, how cleverly inhuman in performance. "Hench" begins life clipped and muddy, in apparent imitation of P.J. Harvey's "Rid Of Me," but evolves into a sort of bright post-rock layer cake, one that's light and fluffy at first bite, becoming heavy, nauseating, and darkly warped and psychedelic at an alarming rate: sunshine acid transmogrified to peyote.

The delirious "Sweater" conjoins what straight world guitarists would likely consider a great many bum notes, wrong turns, and unholy tunings into a Sonic Youth fan's idea of a nasty little pipe dream, all cacophony and splice and everything nice; "Gangrene/Snickers" plays merry Hell with channels, see-sawing Smith's semi-ambient blare into a strobe-like dose of headswim guaranteed to elevate pulse rates; "Charles Rats Get It On Olson"—I won't even attempt to parse the in-jokes in these titles—x-actos an already convoluted construction into something approaching Eric Copeland's idea of instrumental pop excess. (Did I mention that Mister Hands is all instrumental? I did not before, but I will now: Mister Hands is all-instrumental.) "Don't Touch" brings the hard-as-fuck thunder god riff ruckus, and belongs on every mixtape made this fall for headbanging homies; low-fi, righteous, and vaguely distorted, it's driving-home-at-three-a.m.-with-the-windows-down gnarly.

When I was 11 or 12, my mother and I went out to stay with some of her Wiccan friends who lived in a ranch house bordering a wild, sprawling woods. When I wasn't losing myself in the host's Bloom County library, I struck out for the copses, as I was wont to do in those days. Wandering for hours and hours alone, baffled, scared, and thrilled in the face of my apprehension, I remember feeling very certain that, like, that was it: I was inextricably lost. Perhaps I'd unknowingly crossed an invisible borderline into a dimension devoid of human life; perhaps reality as I remembered it was a fever dream. Who would find me, way out here, wherever here was? No one. This was it. In my mind there was no search party or emotional, televised appeals, just a vanished self and a cut straight to the funeral, puerile testimonials and creaking caskets. And once accepting that I could never find the right road or the right house or my mother or whoever it was we were visiting, I found all of it, as if on cue—and discovered that I hadn't been missed at all.

When Mister Hands seize and scatter me, I experience that delicious sense of dislocation all over again, scenes out of sequence but familiar in indistinct ways, a tree like you know because maybe you dreamed about it, or dreamed that you dreamed about it. I become Tom Cruise in Vanilla Sky, edutained into perpetuity and maybe: Beyonder.