Indy racing and a day with the kids. 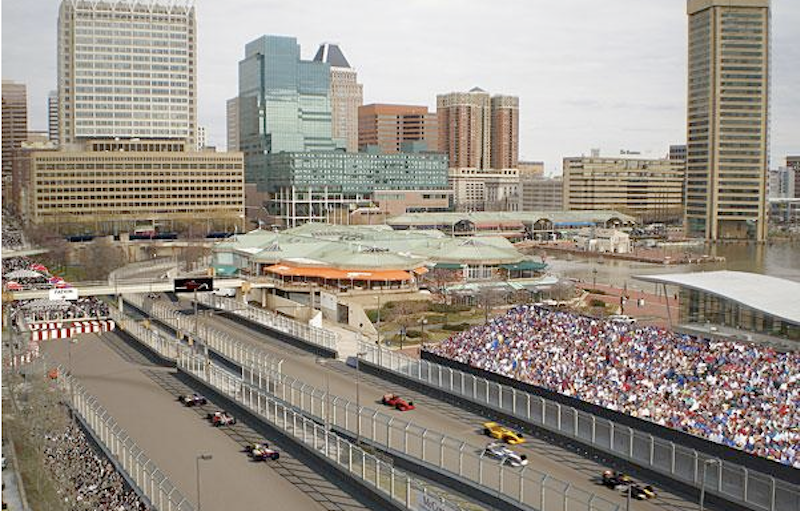 I've never been a racing fan but the thought of cars screaming down Pratt St. at 180 mph certainly intrigued me. As a lifelong sports fan and Baltimore native the concept of the Baltimore Grand Prix initially sounded like a pretty cool experience. When the announcement was made last year that the inaugural Baltimore Grand Prix would be run on Labor Day weekend 2011 I couldn't wait to attend.

Then the doubts started to creep in. One glance at the ticket prices caused me to cringe. The recent incidents near the Inner Harbor with tourists being injured or attacked added a layer of doubt and worry. The fact that it was the initial running of the race led me to believe that the event could be a massive cluster-fuck. Would my enthusiasm be met with long lines, ticketing issues, insufficient security, and a lack of public restrooms?

I woke up on Sunday morning to a rare blank day on the calendar and a questionable forecast. I figured, what the hell? I told my wife that I was going to take my four-year-old son to the Grand Prix. Much to my surprise, she wanted to go as well, which meant that our two-year-old daughter would be along for the ride. As a racing virgin I had no clue if a street race was a good place for a toddler and her slightly older brother, but I was willing to find out the hard way.

August and September are particularly tough months on our household budget. After spending on summer trips, ball games and pool days we're greeted with both kids' birthdays, our wedding anniversary, two car inspections and our homeowner's insurance renewal. The thought of dropping a couple hundred bucks at the Grand Prix wasn't all that appealing but it was a first in Baltimore sports history and I felt a civic obligation to attend.

My intention was to take the Light Rail to save on parking. A drive from York, PA to the Warren Rd. station and $6 got us a spot on the sparsely populated southbound train.  The train quickly began filling up with people clad in Orioles, Ravens and Terps gear. There was even some occasional Baltimore Grand Prix garb. The crowd was friendly and talkative. With the demise of the Orioles it’s always nice to see a sporting event bring the community together. It's one of the reasons I always try to attend opening day at Camden Yards; for one day in April those old feelings return for a few fleeting hours. They came back on that Sunday train ride.

When we got off the train at Baltimore St. it took us a few minutes to get our bearings. The IndyCar occupation of Baltimore had closed major thoroughfares and re-routed traffic. My intention was to seek out the nearest gate, buy some general admission tickets and see what all the fuss was about. We made our way down to the fencing along Pratt St. when I quickly discovered that we'd need to call an audible.

As we pushed through the crowd in front of a Pratt St. bar two blurs whizzed through my peripheral vision accompanied by ear-piercing sounds. The earplugs we stuffed in our ears didn't offer much resistance. I knew it would be loud, but holy shit! My wife, son and I were fine but my daughter screamed in horror and desperately wanted to be rescued from her stroller. We quickened our pace and thought once we got inside the gate we'd be fine. A few moments later the next set of cars flew past and my son freaked. He said, "Daddy, it's too loud. I don't like these racecars anymore. I want to go home." Thankfully his realization came before I dropped $75 on tickets. We headed for Lombard to escape the noise and regroup.

We ducked into The Gallery, got a snack in the food court and watched the cars through the glass atrium. It was a great vantage point because the track turned right in front of the building. Everyone was happy, snacking and watching the race with limited noise disturbances. A crowd quickly gathered and the rent-a-cops came by to shoo everyone away from the windows. We polished off our smoothies and decided to head for Harborplace.

We crossed the pedestrian bridge over Pratt St. and were again offered an incredible view of the race. Cars were zooming down Pratt and turning on Light St. just a few hundred feet away. On the bridge were about 10 of Baltimore's finest attempting to keep the crowd moving. The bridge was open to media and photographers but many onlookers stopped to pull out their cell phones and upload pics to Facebook. The cops were predictably dick-headed about the whole thing. They were apparently stunned that people found the bridge to be a good spot to watch the race.

After a quick stop to let my son inspect the Constellation, which he insists is a pirate ship despite my brief history lesson, we headed to the Top of the World. We paid $13 to ride the elevator to the 27th floor of the World Trade Center and were greeted with a view of nearly half of the racetrack. We could see the long straightaway on Pratt St. where cars were hitting peak speeds, the turn at Light and the hairpin turn in front of the Maryland Science Center. It was an amazing view. A sea of people, glorious sunshine, and high performance race cars zooming through city streets. Where the hell were we? It was like some kind of bizarro world where I hopped the Light Rail to see the O's get pasted by the Yankees and I ended up on the set of Iron Man 2.

I didn't find out who won the race until hours later. Not that it mattered. Congrats to Will Power, we'll see you next year. I don't think I'll ever be a grandstand guy; sitting there for hours waiting for the cars to pass every few minutes doesn't hold much appeal for me. I'm not even going to say that I'm now a racing fan, but I am a Baltimore Grand Prix fan. We had a great family day in a city that we love all for less than $100.