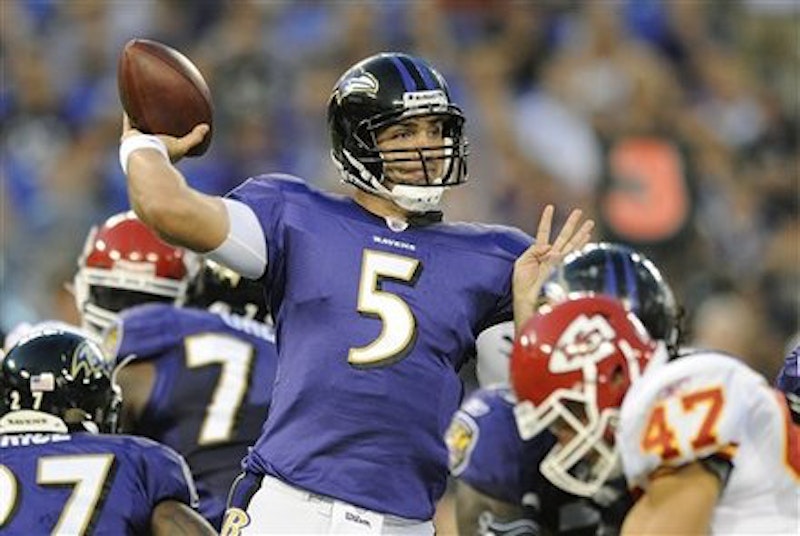 The Baltimore Ravens scored an ugly preseason victory against Kansas City on Friday night. The Ravens first team offense was on the field for much of the first half and mustered just 10 points. I'm not one to be concerned about pre-season results but the sight of Joe Flacco running for his life was both encouraging and worrisome.

The struggles weren't a shock as the Ravens were playing without two of their starting offensive lineman, center Matt Birk and right guard Marshall Yanda. Birk has missed all of training camp after having knee surgery. He is expected to be ready for the regular season but there are no guarantees. Yanda, who’s bounced between tackle and guard missed practice last week with back spasms. The fill-ins included rookie Jah Reid, the much maligned Oniel Cousins (playing out of position), and a former practice squad player at center. Needless to say, this is not the offensive line that will be protecting Flacco on 9/11 against Pittsburgh.

I was encouraged by Flacco's ability to evade Kansas City's seemingly endless rush. Despite being under constant pressure Flacco was not sacked. He showed improved escape skill in the pocket and fought to buy time and keep plays alive. Best of all, Flacco never forced anything. He tossed the ball out of bounds when the play broke down and didn't allow the pressure to bait him into a pick.

After the Lee Evans deal it was reported that the Ravens have about $2.4 million in space under the salary cap. Baltimore has been searching for a veteran center for weeks, at one point agreeing to a deal with former Raven Casey Rabach only to have him fail his physical. It is possible that the Ravens are simply waiting for Rabach to get healthy enough to pass the physical and they will attempt to sign him again before the start of the season.

I've heard many fans complain about the work of GM Ozzie Newsome. Despite the fact that Newsome addressed every one of the team's positional needs it still isn't enough for some people. The important thing to remember is that the season doesn't start for three weeks. Baltimore added veteran receiver TJ Houshmanzadeh on the eve of last season's opener. There are always surprise cuts as teams whittle their rosters down for opening day. It wouldn't be a shock if Newsome scored a veteran offensive lineman just days before the start of the season.

Former New York Giants center Shaun O'Hara and Guard Rich Seubert, both cut by the team in a post-lockout salary cap purge, are still on the open market. Both players missed time last season due to injury but they would bring some veteran presence to the Ravens young O-line. The Saints recently cut veteran right tackle Jon Stinchcomb, a 2009 Pro Bowler. Stinchcomb had started 80 consecutive games for New Orleans. Former Chiefs lineman Brian Waters is also available as a free agent.

I suspect Baltimore is using the preseason to get a long look at some of their young lineman, most notable Cousins and Reid. Cousins hasn’t played well in his brief regular season appearances, and has struggled this pre-season. He's likely to be cut. Reid, the Ravens third round pick in April, is under consideration for the starting right tackle job. Given Reid's inexperience and the number vets available in free agency I'll be surprised if he starts the season opener. It's likely that Newsome is engaged in a high stakes game of chicken with the agents for the free agent lineman. Ozzie can keep praising Jah Reid for another few weeks. Every day that we get closer to the start of the season the price for the free agents will likely fall. Given Baltimore's Super Bowl aspirations, and Newsome's recent acquisitions of Ricky Williams and Lee Evans, I think it's possible that the Ravens add both a center and a right guard/tackle before Week One. Chill out Baltimore fans and let Ozzie play the market.