A blow by blow account from the corner of 25th and St. Paul. 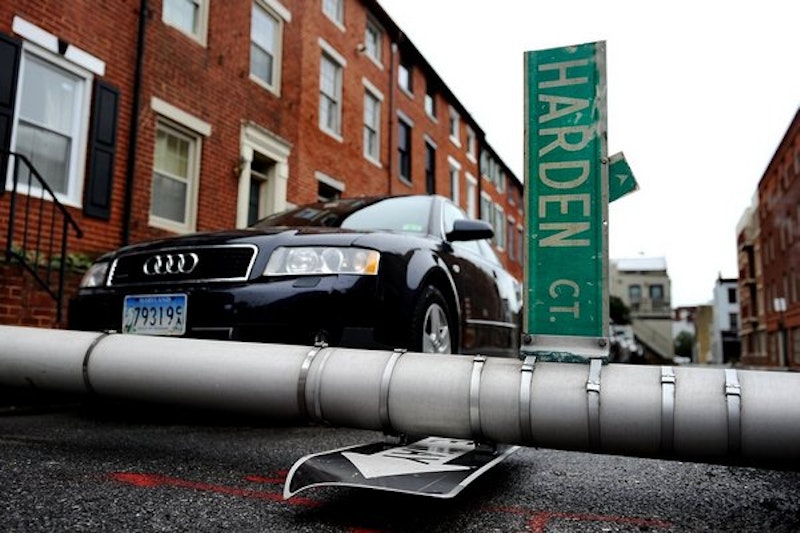 Nothing’s too crazy right now; I took some garbage out to the alley and there was a waterfall doing its thing into the dumpster, but that’s the extent of Irene’s histrionics as of 8:05 at the corner of 25th and St. Paul Sts. in Baltimore.

I’ve got candles and bourbon; I’ve got a full tub of water; I’ve got crackers and extra cat food and lovely wool socks and three types of Old Bay—but one eye is on the ceiling in my bedroom, which, in the one month since I’ve started living here, has leaked twice. So, assuming my AWOL/MIA/bullshit landlord actually did what he was supposed to do, my bedroom should be okay. But odds are he didn’t, so this hurricane log might get interesting, incoherent, or both.

What the hell: the Bay Bridge is closed, but the scene outside my window is pretty weak. This is what bourbon and West Wing episodes create: an unnecessary sense of disdain toward an as-yet immaterialized hurricane.

I had a plan: use the Calm Before the Storm to finish unpacking all the crap I haul around with me. The other day my girlfriend asked me: Why do you have dozens of Cal Ripken, Jr. baseball cards?

The leaking commences—a slow patter. I’ve triaged my pots and bowls for the various breaches in my castle wall, plus I’ve thrown down a bunch of old towels. I think staying in the living room is the best thing I can do for now. That’s where the action is: my snoozing cat, an ottoman for my feet—maybe I should bring the fridge in here.

Sirens, drips, and electricity. These are a few of my favorite things, except the first two. My girlfriend, who lives in Hampden, no longer has power. There’s this weird sense of guilt—as if it’s necessary for everyone to suffer the same as everyone else. When everyone spilled out onto the sidewalks after the Great Quake of ’11, I walked out of my Mt. Vernon office and yelled “Spring Break” but I don’t think anyone heard me. After the collective razzing that was the Earthquake and several days of Hurricane Hype, it seems like we should get hammered (weather wise, amirite?) and have terrible things happen to our next-door neighbors so we can cobble together leftover casseroles and offer up spare rolls of toilet paper and nod our heads approvingly as said next-door neighbors gripe about BGE being BGE, but you know what President Bartlett is about to take on Speaker Hafley and end the government shutdown while conceding nothing.

Still raining, though not particularly hard, and I still have power, so basically the Hurricane That Could has turned my Saturday night into a putter-fest of various inanities. Girlfriend is asleep with her cat; my cat is curled up in her box. Ever since she lost her hearing she’s been much calmer during storms, which used to completely freak her out—in case my pronoun usage is fucked, I’m talking about my cat, not my girlfriend, though, yeah. Yeah.

I’ve got a good game of Civilization IV going on right now; I’m the Egyptians, and I just destroyed the German civilization, and I’ve got my eye on the Mongolians next.

Christ, just heard a couple of yahoos out on the street (and in the light rain) scream “Yeah!” and “This is my storm” and “Yeahhhhhhhh!” Amateurs.