Incumbent Stephanie Rawlings-Blake has avoided any serious competition or discussion of issues in her campaign for mayoral re-election by outspending her rivals. 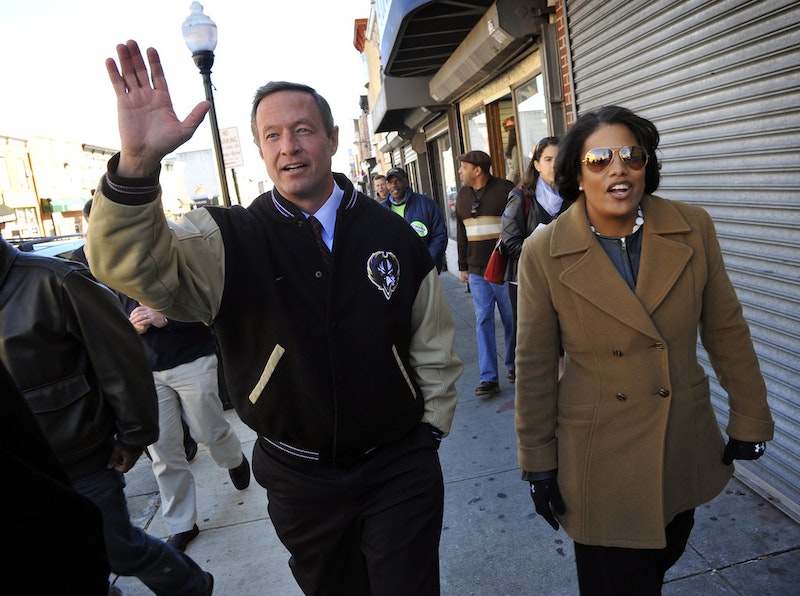 The three building blocks of any successful political campaign are money, media and organization. It’s possible to win with any two as long as one of them is money. Money will purchase the other two. And so it is that Baltimore Mayor Stephanie Rawlings-Blake can fill the air with bland TV commercials while her rivals are reduced to attending sparse forums and redundant debates.

Here in a city that can’t even get the primary election date correct on its sample ballots, Rawlings-Blake has cornered the market on money as befits an incumbent and political legacy. And because of the mercantile nature of her campaign, the other two pieces have fallen deftly into place. Rawlings-Blake has fertilized her campaign with more money than all other candidates combined—an impressive $1.4 million so far. Her campaign has assumed an air of casual invincibility, much to the chagrin of the other candidates and the delight of her supporters.

Much of Rawlings-Blake’s success derives not only from her status as an incumbent but also the symmetry between her campaign and the political organization of Gov. Martin O’Malley (D). City Hall and the State House are a virtual blur. O’Malley’s brother, Peter, is Rawlings-Blake’s chief of staff and former chairman of the Maryland Democratic Party as well as chief of staff to former Baltimore County Executive Jim Smith. Peter O’Malley also served as Martin O’Malley’s campaign organizer. Put another way, Peter O’Malley probably knows where more bodies are buried than the U.S. Office of Graves Registration, a pluperfect plus for Rawlings-Blake.

Rawlings-Blake is also the beneficiary of significant demographic changes in the city’s voting patterns. The largest voting bloc in Baltimore is now the collective of black women who have dominated elections in the past two or three cycles.

In Baltimore, where Democrats outnumber Republicans by nine to one, the primary election is all that matters because there hasn’t been a Republican elected mayor since 1963, when Theodore R. McKeldin Jr. ran on a fusion ticket with Democrat Hyman A. Pressman. Shortly thereafter, fusion tickets were outlawed by the General Assembly. Primary elections are all about candidates organizing their vote and getting it out on election day. Issues as well as personalities are usually reserved for general elections, which are all but non-existent in Baltimore City.

Try as they might, the major challengers—Otis Rolley, former chief of staff to Mayor Sheila Dixon and city planning director; Jody Landers, former vice president of the Greater Baltimore Board of Realtors; Court Clerk Frank M. Conaway; and Sen. Catherine Pugh—have yet to succeed in making an issue stick. They talk of reducing property taxes, rebuilding aging schools, creating jobs, attracting business and a new and youthful population, all of which are difficult, if not impossible, in an impecunious city without bundles of cash from Washington and Annapolis, both broke as well. Yet it is Rawlings-Blake’s close association with O’Malley that irks her rivals at the same time they envy her success. The mayoral campaign, like Churchill’s pudding, has no theme.

The closest any candidate has come to a story-line issue that resonates with voters is Rolley’s questioning of Rawlings-Blake’s judgment on sponsoring Baltimore’s first Grand Prix auto race on downtown streets over Labor Day weekend. The spending to prepare streets for the race, $7.7 million, and the inconvenience that it will cause has many residents angry and upset. But the worst offense was cutting down trees along Pratt St., an act that was legally challenged but thrown out of court. Rolley has questioned whether the race is worth the inconvenience and the cost and whether it will produce the kind of revenue to match Rawlings-Blake’s claims. Still, Rolley got a one-day story and little other traction. If Joyce Kilmer were alive today he would write: “I think that I shall never see/a Grand Prix as lovely as a tree.”

The punchline to the mayoral contest was Conaway’s remark at a black debate forum that, if elected, he’s going to fire everyone in City Hall “because they don’t look like us.”  The remark is reminiscent of an observation made by Rawlings-Blake’s late father, the esteemed Del. Howard Pete Rawlings (D) in the 2002 election: “People vote for people who look like them, talk like them and smell like them.” Read into those remarks what you will.

Special prosecutors are the long arm of the law when there’s a dirty job to be done. They come and go, at great expense and lavish exposure, in times of moral crisis and evil deeds. Usually they’re appointed to create distance between subject and object. A special prosecutor (Archibald Cox) helped to bring down President Richard M. Nixon. And a special prosecutor (Kenneth Starr) embarrassed President Bill Clinton in the Monica Lewinsky case and cost him his law license for lying. But Maryland may be among the few, if not the only state, that has a permanent special prosecutor who can initiate his own investigations. The office took down Mayor Sheila Dixon (D). A previous special prosecutor, Stephen H. Montanerelli, declined to take on the case against Linda Tripp in the Clinton-Lewinsky imbroglio. The Maryland prosecutor’s latest foray is the robocalls that originated within the 2010 campaign for governor of Robert L. Ehrlich Jr.

And now, 35 years after the fact, Maryland Attorney General Douglas F. Gansler (D) argues that the state office of special prosecutor is an expensive redundandancy. He’s right, of course, and he’d like to see the excess baggage eliminated. “One day we will get rid of the state prosecutor’s office,” Gansler said during an interview on Washington’s Newschannel 8 as reported by WBAL Radio.

The Maryland special prosecutor’s office is kind of a bureaucratic stepchild. It originated more as an ornament to good government than an actual instrument of justice. It was conceived at a time when the U.S. Attorney’s office in Maryland was conducting several widely-publicized investigations into political corruption that lead to indictments and convictions—Vice President Spiro T. Agnew, Baltimore County Executive Dale Anderson, Anne Arundel County Executive Joseph Alton and Gov. Marvin Mandel. The idea behind the office of special prosecutor was to show the nation, and the state’s voters, that Maryland was not the zip code of Tammany and Tweed and that the state was capable of cleaning up its own messes without the help or the interference of federal prosecutors.

First proposed in 1974, the legislation died in the General Assembly and then again in 1975. Finally, it was re-packaged as a constitutional amendment and approved by the voters in 1976. It was opposed by a majority of legislators, by then-Attorney General Francis B. Burch (D) and quietly by Mandel. While the opposition was broad, most were reluctant to oppose the bill publicly for fear of appearing that there was something to hide.

Since its creation, the office of special prosecutor has been kept on a very short leash. And there have been periodic attempts to abolish the job by eliminating the office’s budget. Its budget is anemic, deliberately so. And its staff is minimal. The reasons are self-explanatory: One of its assignments is to initiate investigations into allegations of corruption by public officials, mainly campaign law violations, the very same officials who oversee the office’s budget. The governor appoints the special prosecutor, on the recommendation of an advisory commission, currently Emmit Davitt, an appointee of Gov. Martin O’Malley. The very first special prosecutor was Gerald D. Glass, an ally of political boss James H. Jack Pollack and a former Baltimore City assistant state’s attorney.