Not everything is as it appears when you’re speaking with a stranger. 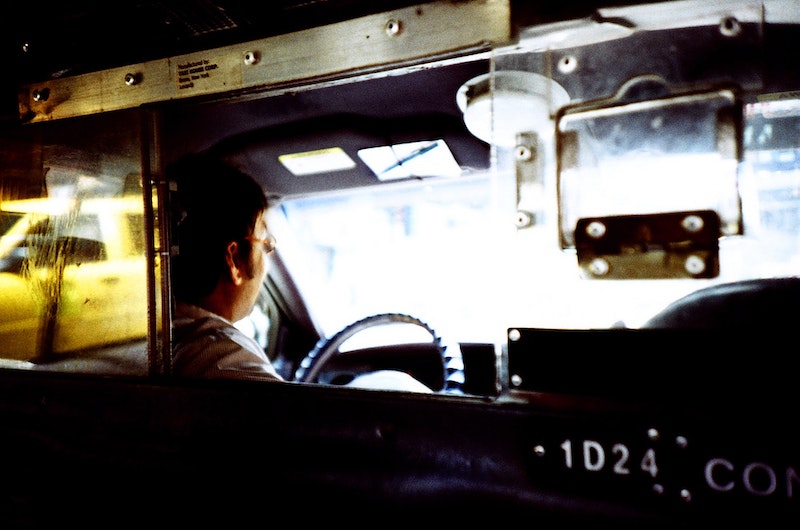 It’s always awkward when you’re trapped in a conversation with someone whose cultural/political views are a bit off-kilter, especially when that person appears reasonably intelligent. This happens a lot, but on one occasion about a week ago, confined in the back seat of a taxi on a lengthy, traffic-snarled ride, I let the chatty driver rattle on instead of ignoring him, and it was a wise choice. It didn’t hurt that the guy, a 60-year-old whose scruffy appearance—he had at most two teeth and was dressed in 1960s-era rag-tag duds—didn’t mesh with his articulate stream of conversation, was in an ebullient mood, on the way home after scoring a huge fare from the city to Dulaney Valley in Baltimore County. At first blush, when he spoke of his daily routine and how he’d steer clear of any neighborhood that was “taken over by junkie blacks,” I thought he was an old-school racist. And that’s no fun.

But as we talked, and talked, on the topics of over a dozen bars, clubs and restaurants—some defunct, some thriving, others just scraping by—that we’d both frequented over the years, it was clear he was far more complicated than a stereotypical redneck, the kind that isn’t at all uncommon in pockets of Baltimore city. He said he lived near Greektown, a well-known neighborhood in East Baltimore that many, many years ago was populated by, well, immigrants from Greece and more than an equal amount of Poles. Upon mentioning that during my first stretch of time in Baltimore—1973-87—I often patronized two restaurants, Ikaros and The Athenian, and was fond of the neighborhood, he said, “Oh, it’s all different now. The blacks, with their damn drugs and guns, have taken over, although there are a lot of Hispanics as well. Now, I like the Hispanics—they work hard, don’t cause trouble and are generally really kind and warm.”

So my quick caricature of a Sarah Palin groupie driving me downtown was out of the window, given his embrace of immigrants, legal or illegal. And frankly, I don’t know anyone here who’s in favor of the ongoing drug wars in East and West Baltimore, with all the violence and hopelessness and abandonment of children. Now, it bears repeating that Baltimore isn’t an entire replica of David Simon’s Homicide and The Wire, but whether citizens here like it or not, the author/director did nail any number of cultural realities in what’s still called, derisively, “The City That Bleeds” or, alternatively, “The City That Breeds.”

While driving down Greenmount Ave., a main drag that’s best seen during the daytime, we both recalled the days when the Orioles and Colts played at Memorial Stadium five or six blocks north, and how the neighborhood of Waverly has gone to the dogs since the abandonment of that perfectly fine ballpark in favor of the glitzy Inner Harbor. Snaggletooth—as I dubbed the driver in my head—rambled for a couple of minutes about a bar that, as it happened, we both knew well: Godfrey’s Steer & Beer, a fixture on Greenmount in Waverly for a decade or two. There was nothing particularly hip or trendy about Godfrey’s, but the pizza was more than passable, the $.25 drafts of Pabst a bargain, and the mixed clientele made for rich conversation if you were in the mood. Shirley was the brassy bartender, a weather-beaten dame who didn’t confer “regular” status—especially to longhairs in the early 70s—until a customer had measured up to snuff. The jukebox was a mix of mainstream hits and bad oldies (Tony Bennett before he became the pre-Betty White in the 90s), and I don’t think I’ve heard the horrific songs “Fly, Robin, Fly” and “Get Down Tonight” since the Godfrey’s days, which is, of course, a blessing.

What’s strange is that it’s entirely possible S-Tooth and I sat next to one another at this bar many decades ago and perhaps engaged in chatter, never imagining we’d meet up again. It was stranger still, as the driver moved on in his near-monologue, when he explained that he and his buddies would drift over from Hampden to drink at Godfrey’s. It’s not the distance that’s odd—maybe a mile and a half—but the drastic change of cultural worlds that it represented. He said, I swear with a wink (probably for my son’s benefit), “You know what ‘God’s Country' means, right?” Well, yes: that was the nickname Hampden residents gave their neighborhood because it was all white, and never infiltrated by those Baltimoreans with, euphemistically, deep suntans. (I toyed with asking if he’d been to “Allah’s Country” lately, but didn’t want to press my luck.) I lived in Hampden for a year during college with several pals, and once the neighbors in the adjacent rowhouse got used to us, one of them was delighted to let me know all about “God’s Country.” That creeped me out—I mean, it was 1977 after all—but not enough to pull up stakes and find another rental.

In the intervening years, Hampden’s become semi-gentrified, with, as the cabbie called them, maybe having a Mr. Natural flashback, “yippies,” meaning young people under 30. And while the neighborhood has changed, with “indie” shops and restaurants mixed in with the old junk stores, it’s still kind of ratty. I don’t mean that in a negative way, since unlike East Baltimore’s Fells Point, which more than a generation ago really was the most eccentric and fascinating neighborhood in the city but has since become mostly a strip of fratboy sports bars and other equally noisome establishments, Hampden is still pretty authentic. It’s much the better for the integration of artists and musicians along with the lifers who still remember with disgust the night in 1982 when conservative state’s attorney Bill Swisher was defeated by Kurt Schmoke, who five years later became Baltimore’s first elected black mayor. (Schmoke, before he got bogged down in the morass of governing a problem-plagued city, was a rising star in political circles, and might’ve had a shot at statewide office. Also, he did himself no favors by having the guts to advocate the decriminalization of drugs, which caused headlines across the country.)

Our ride nearing completion, we moved on to lighter, nostalgic banter, centering on all the regional chains and products that helped define Baltimore. Gino’s Burgers, for example, and the wonderful soft drink Almond Smash. Harry Little’s Subs, Leon’s Pig Pen, Little Tavern, Polock Johnny’s, Hansen’s, the Stadium Lounge, The Block, National Premium beer (the upscale alternative to the undrinkable National Boh, which, despite its retro popularity today, was likened to piss by my friends and me), restaurants owned by Johnny Unitas and Brooks Robinson, and the fabulous Lexington Market, once a destination that’s since fallen into utter disrepair. Taking leave from the cabbie, my son, processing a 25-minute local history lesson, asked if I’d really been to all the places mentioned. Yes, indeed, Junior, I replied, still a bit confused but captivated by our session with Snaggletooth, a man with more contradictions and surprises that I’d reckoned on.