Though it's not what you think. 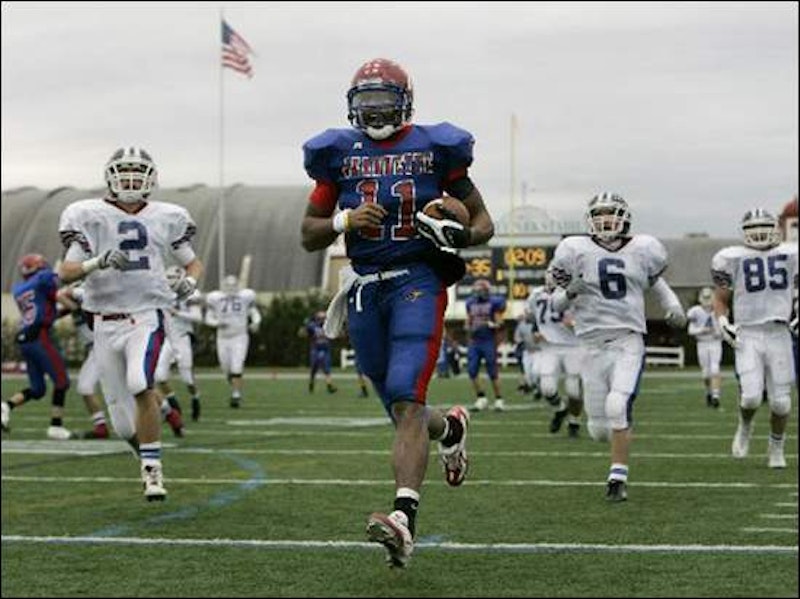 Embattled Ohio State quarterback Terrelle Pryor announced earlier this week that he’d be leaving school and entering the NFL's supplemental draft to be held in July. ESPN's John Clayton followed up on Pryor's announcement by suggesting some teams that may be interested in drafting the fallen Buckeye. Clayton mentioned the Baltimore Ravens as a possible destination for Pryor as a wide receiver.

As a Ravens fan, I hope the team steers clear of Pryor, though probably not for the reasons you may think. I don't really have any moral or ethical objection to the actions that resulted in Pryor's departure from Columbus. The NCAA and Ohio State made millions on the backs of Pryor and his teammates every time he led the Buckeyes to a BCS bowl. To suggest that Pryor trading on his fame and signing autographs for money is a crime against the spirit of college athletics is laughable. Pryor didn't kill any dogs, drag his girlfriend down a flight of stairs, shoplift, cheat or do anything else that would provoke moral outrage. He certainly didn't do anything illegal. In fact, given the other revelations about the Buckeye football program and Jim Tressel's resignation, it sounds like Pryor's actions were considered perfectly acceptable in Columbus during Tressel's tenure. If the worst thing Pryor ever does is sell an autograph then he's probably a pretty good dude.

I get it. Pryor broke an NCAA rule, no matter how arcane or ridiculous it may be. Getting chased off campus prior to the start of his senior season sounds like punishment enough to me. Pryor's transgressions aren't the reason the Ravens should stay away.

I've also heard detractors claim that Pryor is arrogant and selfish. Imagine! A selfish and arrogant athlete. What a novel concept. I'm pretty sure Kobe Bryant meets that description and he has five rings. Sometimes arrogance and selfishness are just a byproduct of athletic prowess. If Pryor can win in the NFL no one will care about his arrogance. Pryor's attitude isn't the reason the Ravens should stay away.

Pryor held a press conference a few days ago with his new agent, Drew Rosenhaus.  Unlike many sports fans I don't have anything against agents. They have a job to do, and Rosenhaus does a great job for his clients. Acting on the behalf of Terrell Owens and Plaxico Burress isn't the kind of meaningful work I crave, but Rosenhaus has clearly found his niche. In Pryor's press conference Rosenhaus made specific statements regarding his client's viability as an NFL quarterback. Rosenhaus said that Pryor is a first round talent and expects him to go in round one of the supplemental draft. Given the opinions of many draft pundits a first round selection seems unlikely.

Most experts have suggested that Pryor is a tremendous athlete and is either a late round project at QB or perhaps a middle prospect for a position change to either receiver or tight end. Pryor is often criticized for his lack of leadership and accuracy. Another knock against him is lack of experience in a pro style offense. If the Ravens select Pryor with the intention of moving him to receiver they will be drafting two massive headaches. Rosenhaus, and Pryor by proxy, have clearly stated that the intention is for him to play quarterback at the next level. A move to another position will result in a disgruntled player and a mouthy agent on the warpath. While Pryor may be a tremendous athlete the juice simply isn't worth the squeeze for Baltimore. With young receivers Torrey Smith and Tandon Doss already working through the playbook with Joe Flacco the Ravens don't need the headache of taking on a project playing an unfamiliar position.

My guess is the oft-criticized Oakland Raiders select Pryor in the second or third round next month. The ancient Al Davis is consistently unconventional and after whiffing on JaMarcus Russell the team is in need of a young developmental quarterback. Miami, which has been looking for a QB since Dan Marino's retirement, could also take a chance on Pryor. I'd be shocked if the Ravens call Pryor's name.