The War on Voting 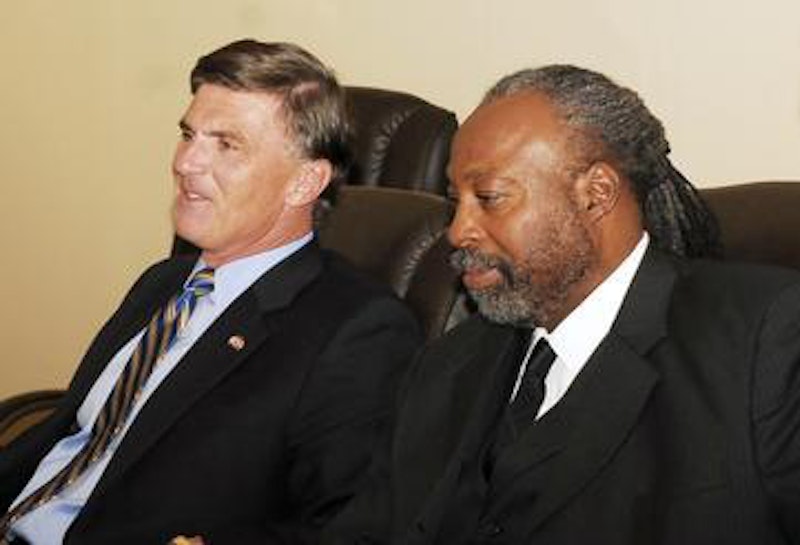 Grand juries and indictments aside, there is little or no difference between Baltimore consultant Julius Henson’s admission of voter manipulation than that of Republican governors and legislatures across the country and that is to discourage blacks and poor people, usually Democrats, from voting. Henson did it with Robo-calls and Republicans are executing it with roll calls, giving the underhanded enterprise an air of legitimacy. Henson termed his action “counter-intuitive”; Republicans call it “voter ID.” Henson was indicted; Republicans are signing what amounts to “voter suppression” into law.

Henson was working on behalf of Republican Robert L. Ehrlich Jr. in his 2010 attempt to reclaim the Maryland governorship, which he lost to Democrat Martin O’Malley in 2006. Henson has admitted that he conceived and authorized more than 111,000 Robo-calls before the polls closed on election day. And he did it hand-in-pocket with Paul Schurick, Ehrlich’s political sidekick and campaign manager, according to the indictment. The calls targeted Democrats in predominantly black precincts in Baltimore City and Prince George’s County and told them “…Governor O’Malley and President Obama have been successful. Our polls were correct… We’re OK. Relax. Everything is fine. They only thing left is to watch on TV tonight. Congratulations and thank you.” This cozy little homily, according to Henson, was supposed get Ehrlich supporters off their butts and out to the polls. Henson’s line of reasoning raises the metaphysical question: Huh?

Republicans in about half the 50 states are leading the charge for some form of voter ID, either a photo ID or by swearing an oath, according to an Associated Press survey. At least 13 states so far have enacted laws requiring that a photo ID, usually a driver’s license, be shown at polling places as a prerequisite for voting. And another 16 states require some form of identification at the polls. Opponents of photo ID requirements argue that the effort would disenfranchise millions of blacks and poor people who would be less likely than middle class people to own a car or carry a driver’s license, let alone a passport, which is also an acceptable form of photo ID.

In the pathology of politics, voter suppression is as old as the Republic, for the most part implicitly neither illegal nor legal, but acknowledged with a wink and a nod, until the 1960s when a bundle of civil rights legislation generally outlawed the practice through voting rights legislation. Voter suppression has many variations beyond outright intimidation. In Maryland, for example, political bosses such as Jack Pollack were paid tribute to turn the vote out or tamp down the vote, as requested by the patron or vendible candidate. And perennial candidates such as George P. Mahoney were subsidized generously to enter a race for governor or U.S. Senator to shift votes to or from other candidates on the ballot and in the process become wealthy over a lifetime of running for office (Mahoney ran for governor or senator 10 times, often coming close, but never a winner, doing what he was supposed to do). Remember, too, that Baltimore earned the sobriquet “Mobtown” because of the roaming gangs of thugs who used to intimidate voters. The “Blood Tubs” gang actually dumped tubs of animal blood on voters.

One outlandish example of voter disenfranchisement occurred in Indiana, where in South Bend, the home of Notre Dame University and “Football Jesus,” a dozen elderly nuns were denied the right to vote because they could not produce photo IDs, i.e., driver’s licenses. Indiana was the first state to require photo IDs as condition for voting and the law was upheld in a 2008 U.S. Supreme Court decision. Georgia had adopted a similar photo ID law in 2005 that allowed the state to charge for photo ID cards, other than driver’s licenses, which the courts overturned by ruling that the charge was tantamount to a “poll tax,” an early Southern “Jim Crow” tactic at voter suppression because blacks could rarely afford to pay the tariff. Initially, the Supreme Court upheld the poll tax as constitutional but finally reversed the decision in 1966 and outlawed the practice in state elections.

Included in the Maryland indictments with Henson was Schurick, a long-time aide to Ehrlich who managed both his 2002 and 2010 campaigns for governor and served as Ehrlich’s communications director during his one term as governor. “The first and foremost desired outcome [of the Schurick Doctrine strategy] is voter suppression,” the indictment said. Translation: Create confusion, fear and doubt among black voters and thus trepidation to voting. Henson had attempted to join Ehrlich’s 2002 campaign after the consultant was rejected by the campaign of Kathleen Kennedy Townsend, then Maryland’s lieutenant governor and a candidate for governor, over racist statements that Henson had made. Ehrlich confided privately that Henson’s 2002 proffer was little more than “a shakedown” because of the exorbitant fees that he demanded. In 2010, the Ehrlich campaign paid Henson $111,000 for his services. On election day in 2002, the Ehrlich campaign engaged in its own exercise of voter suppression. It bussed homeless people from Philadelphia into Prince George’s County, which is 75 percent black, and distributed misleading literature linking Ehrlich to black Democratic candidates and suggesting that he had their support. The Ehrlich campaign also circulated flyers in black and Hispanic communities listing an erroneous date for election day and implied that they could not vote if they owed rent, child support or unpaid parking tickets.

As a result, new language was added to the Maryland law by Del. Samuel I. Rosenberg and Sen. Lisa Gladden, both of Baltimore’s 41st District. It states that it is a violation of the election law to “influence or attempt to influence a voter’s decision whether to go to the polls to cast a vote through the use of force, fraud, threat, menace, intimidation, bribery, reward, or offer of reward.”

Maryland has no ID requirements at the polls and has adopted progressive voting procedures such as early voting and provisional voting as ways to encourage voter participation. Republicans generally objected to both, claiming they would lead to widespread fraud and/or benefit the majority party of Democrats. They haven’t. In fact, Ehrlich, as governor, vetoed an early voting bill only to have the Democratic General Assembly reverse his action and enact the law.

The action of Republican governors and lawmakers across the country, in tandem with their partners in Washington, is part of an all-out assault and an attempted rollback of what they consider a liberal agenda and a progressive program advanced by President Obama. It comes at a time of economic distress and joblessness as well as pressure from the increasingly right-wing base of the Republican party. The GOP controls the House of Representative as well as a majority of the nation’s governorships and state legislatures. The GOP’s hit-list across the slate includes women and reproductive rights, Medicare (and Obamacare), Medicaid, workers’ rights and pensions, Social Security, gay rights and, obviously, voters’ rights. There is, except for legal niceties, very little difference between Henson and Schurick’s devious activities and the actions of Republicans under cover of legislative legitimacy to separate the attempts to pervert the voting process. Maybe GOP governors and legislators ought to be indicted as well.