The once praised third baseman has had a less than stellar career. 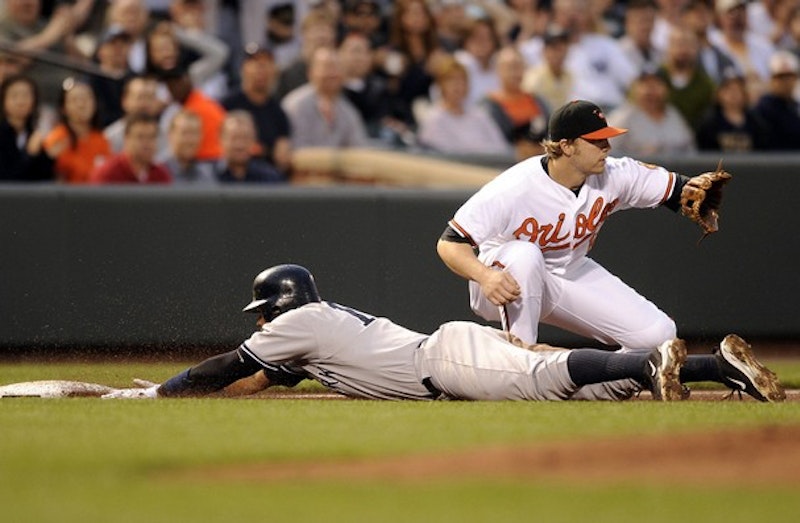 When the Baltimore Orioles acquired Mark Reynolds over the winter he brought along prodigious power and a lot of baggage. Reynolds had a big contract, low batting average and laughable strikeout rates. The Birds traded for Reynolds because they desperately needed a power hitter. The abysmal offense of 2010 needed to be upgraded and Reynolds looked to be an improvement over the tandem of Josh Bell and Ty Wigginton.

Reynolds was never known for his glove work but his defense did get an endorsement from Mr. Oriole himself, Cal Ripken, shortly after the trade. Manager Buck Showalter also praised Reynolds for his defense. Others weren’t so kind. Keith Law of ESPN.com was a harsh critic of Reynolds’ play at third and spoke openly about it after the deal. I’ve never been particularly impressed with Law’s work and pretty much cast his opinion aside as spring training approached. Law thought Reynolds was a butcher at third so I assumed he was probably decent.

A few weeks into the season it was clear that I was wrong. Reynolds is an MLB third baseman in name only. Sure, you could hand me a catcher’s mitt and tell me to crouch behind the plate but that doesn’t make me a catcher. Sound familiar, Jake Fox? Reynolds is on pace for a rather dubious 40/40 season. Unlike Jose Canseco’s historic 40 homers/40 steals season of 1988 Reynolds could wind up with 40 homers and 40 errors. Through Baltimore’s first 81 games, Reynolds had exactly 20 home runs and 20 errors. In addition to the errors, I’ve personally watched him botch six certain double play balls when he failed to field the ball cleanly and was unable to get the lead runner.

Reynolds has racked up the errors in his career. He made 34 in 2008 and another 24 in 2009.I’ve heard some people suggest a move to first base but Reynolds has struggled there as well. He started 24 games at first for Arizona in 2009 and made five errors.  Reynolds is under the Orioles’ control through the 2013 season and while his defense has disappointed his power production is real.

After struggling through the first six weeks of the season, Reynolds now looks like the O’s most reliable cleanup hitter. He has 49 RBI to go with the 20 bombs and he ranks second on the team in OPS. Realistically, Reynolds is part of the solution in Baltimore and not part of the problem. It’s up to the team to find a spot on the diamond to maximize his skills. Maybe he’s just in a defensive slump and the adjustment to AL pitching caused him to lose focus in the field. Maybe he’s Baltimore’s first baseman of the future.

Fourteen straight years of losing can alter the psyche of a fan base. Oriole fans have used Reynolds as a cheap punchline this season harping on errors and strikeouts and failing to give credit for his offensive contributions. I get it, he strikes out a lot. There are worse sins in the world. And yes, he’s awful at third, but he’s the only legit power hitter on a team that talks about competing in the AL East. If the Orioles ever hope to compete they need to take Reynolds’ glove away and then find four other guys who can hit like he can.