At the Center of All Things

Gov. Martin O’Malley's new post as head of the Democratic Governor's Association is the tip of the iceberg when it comes to the man's accumulation of power and influence. 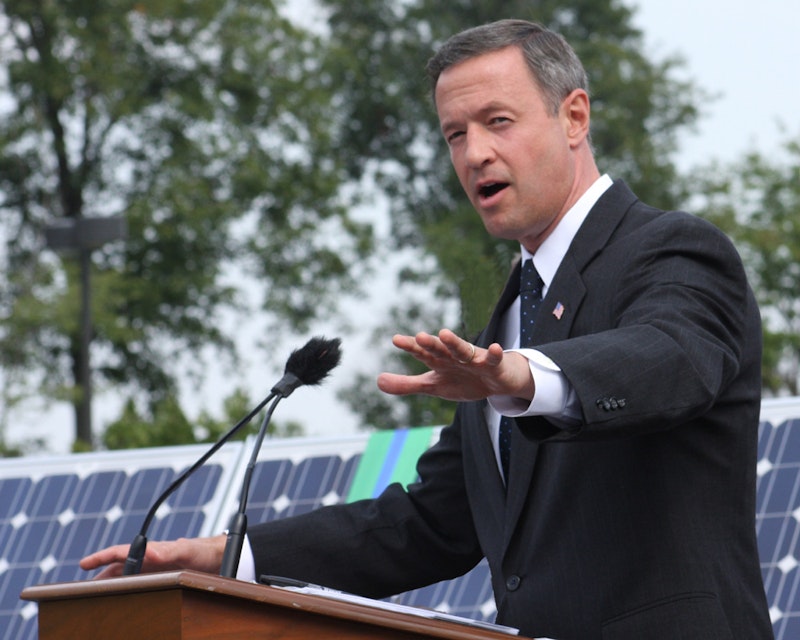 Maryland Gov. Martin O’Malley is up to something— possibly big, or otherwise a monumental tease. He may not know what it is just yet, but he’ll recognize it when he sees it and be ready when and if the moment arrives. Luck, as they say, is when opportunity meets preparation. And that seems to be O’Malley’s watchword.

As O’Malley struts onto the national stage, he is consolidating power at a swift and audacious pace by grabbing control of the machinery of politics. He has made two strategic moves that expand his own political story beyond the governorship and the Beltway and open Maryland politics to widespread speculation, which may be his intention. O’Malley’s arc is rising.
For openers, O’Malley has replaced the high command at the Democratic Governors’ Association, of which he is now chairman, with a long-time ally and factotum from Baltimore. And the name of Parris Glendening’s son has disappeared from the organization’s website where he was once listed as political director. O’Malley’s photo on the DGA website is as big as a four-color billboard.

And now it is reported that O’Malley plans to support—make that name—his brother, Peter, as the next chairman of the Maryland Democratic Party. Peter O’Malley has served as kind of a high-level, though rarely visible, up-from-the-precincts organizer for his big brother’s two campaigns for governor with a reputation for organizational skills and voter targeting. Peter O’Malley had also served as chief of staff to Baltimore County Executive Jim Smith following O’Malley’s 2006 campaign and before rejoining O’Malley’s 2010 campaign where he was paid $8400 a month, according to published reports.

The new executive director of the Democratic Governor’s Association is Colm O’Comartun, who has been an O’Malley confidante and personal sidekick since the mayoral days in Baltimore. O’Comartun has served in several roles in city and state government under O’Malley. Most recently, he carried the title of Director of the Governor’s Office, a nameplate that would appear to supersede that of chief of staff. O’Comartun replaced Nathan Daschle, son of former Senate Majority Leader Tom Daschle (D-SD), who had been executive director of the DGA for six years and had built the organization from kind of a governors’ social club into a major political force with a solid professional staff. Glendening’s son, Raymond, had worked his way up through the ranks to political director after having spent several years as a labor organizer. There may be other changes on the DGA organization chart whose names are unfamiliar.

The Democratic Governors’ Association gives O’Malley and his proxy direct access to Democratic governors, their staffs and prospective candidates across the nation. But more important, it is a Rolodex to the party’s high rollers and contributors in every state. The primary function of the DGA is to raise funds to recruit and elect Democratic candidates for governor. It also tracks and advises Democratic governors on policy matters. Their number has shrunk dramatically to 17 since last November’s elections. Even so, O’Malley will now be rubbing pin-striped shoulders with the high and the mighty in the moneyed salons and boardrooms of New York and Los Angeles.

At the state level, O’Malley’s brother, Peter, as presumptive chairman of the Maryland Democratic Party, will have delegated and authoritative access to Democrats, elected and non-elected, up and down the party’s pecking order where he is already well-known from two previous campaigns. Speaking like a blood brother directly for the governors conveys additional cachet. More important, however, the official position will give Peter O’Malley direct contact with Democratic party chairmen in every other state as well as through the formal association of state party chairman, fattening the Rolodex at the precinct level while his governor-brother schmoozes the party brass and their checkbook patrons.

Superimposing the party chairmanship onto the Democratic Governors’ Association is an organizational masterstroke that would have been envied in a Medici palace. It is also an exercise in hardball politics that has to be played out with finesse lest it be seen as nothing more than naked ambition. The blending of the two covers all bases like a grand slam home run.

There’s nothing wrong with a politician, or anyone else, for that matter, who’s ambitious. Be wary of one who isn’t. Ambitious politicians usually equate opportunity with performance, and they get things done to advance themselves while administering large doses of anesthesia to mask the intensity of the personal drive.

O’Malley, in his new role as chairman of the DGA, is already established on the speakers’ circuit. In January, O’Malley addressed the House of Representatives’ Democratic Caucus in Cambridge; three times last week he spoke in Washington—to a conference sponsored by Governing magazine, before Congress at the invitation of House Minority Leader Nancy Pelosi and he met with Senate Majority Leader Harry Reid. Later this month, he will address the Virginia Democratic party’s Jefferson-Jackson Day dinner. The invitations will continue pouring in, keeping his speechwriters busy.

On the surface, O’Malley’s newly organized operational base, functioning in parallel lines with the governor’s office, will be tooling up for the 2012 elections—the reelection campaign of President Obama, the election and reelection of Democratic governors and here at home the reelection campaign of Sen. Benjamin L. Cardin and Democratic members of Congress.
But below what’s visible, O’Malley and his agents will no doubt be exploring the future for the governor who’s now serving his final term that ends in January, 2015. No U.S. Senate seats will open within that time bracket. Cardin’s up for another six-year term in 2012, and Sen. Barbara Mikulski was just reelected to another six-year term which extends through 2016. Assuming Obama wins reelection, he would be president through 2016.

Nonetheless, O’Malley has begun assembling the building blocks of what could become a formidable national organization, both at the organizational and fund-raising level. Through the DGA, which hands out checks to candidates for governor, he can also accumulate an impressive swatch of IOUs for whatever reason he chooses to use the chits. And for what it’s worth, members of Congress love to welcome governors to Capitol Hill as guests and speakers before committees, and that’s not a bad list of friends to have. Many ranking Congressional staffers live in Maryland. Eventually, if appropriate, the DGA and the Maryland Democratic Party could blur into an O’Malley organization.

And finally, O’Malley will have immediate access to the national press corps, many of whom are his Maryland constituents. By all indications, the telegenic governor will be a frequent guest on cable news shows because of his position as spokesman for the Democratic governors as well as the easy accessibility of Annapolis to the District via Route 50 and ubiquitous presence of cable TV and satellite coverage.

O’Malley is 48, exactly the same age as Obama. Whatever O’Malley is planning, if anything at all, is anybody’s guess at this point. But whatever thunderclap happens, it appears that he’ll be ready for it.